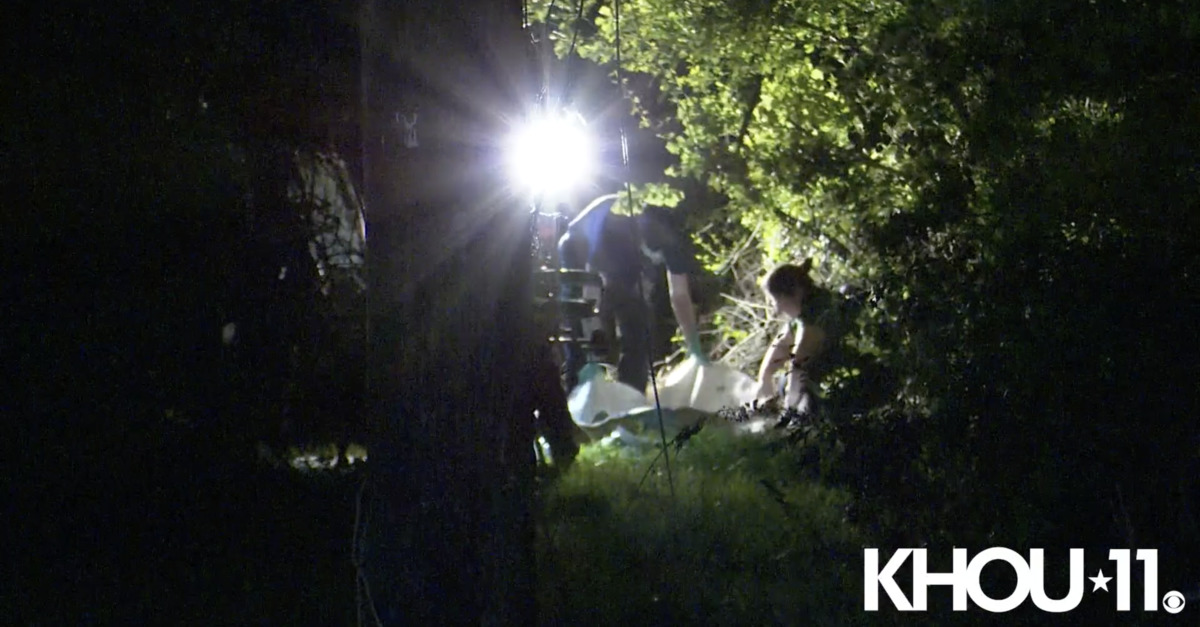 A young man’s body was discovered dumped behind the Second Baptist Church in a small suburb just east of Houston on Monday.

The body had several stab wounds and seemed to have been hastily and perhaps perfunctorily hidden — partially obscured under brush and tree limbs in a half-hearted effort to conceal the corpse, according to the Harris County Sheriff’s Office.

Early Wednesday morning, two teenagers were arrested and charged in connection with the apparent murder.

Local CBS affiliate KHOU reports that authorities received their initial tip around 5 p.m. CST on Monday and discovered what appeared to be the lifeless young adult. An initial investigation has so far been unable to determine how long the body had been left along the tiny red brick and whitewashed church’s fence line before being found.

“Investigators along with patrolmen came out and conducted a search and did, in fact, find an unidentified male dumped along a fence line behind a church,” Sgt. Greg Pinkins said during a press conference. “It appears the male sustained some stab wounds.”

“No rough age on him at this time,” Pinkins said in response to a question from local press on the scene.

The sergeant also noted that the body was “not in [the] early stage of decomp[osition]” and that the victim was a “very young adult.”

“Investigators along with uniformed deputies conducted a search of the area and discovered the remains of an unidentified male located approximately 200 yards behind The Second Baptist Church located 400 Wallisville Road,” a press release noted. “The remains had been partially buried under brush and tree branches to conceal the body.”

Sheriff’s deputies were initially unable to establish the victim’s identity or if he had been killed at the crime scene instead of simply being dumped there. Investigators also noted that there did not appear to be any surveillance cameras in the immediate area surrounding the church.

According to local ABC affiliate KTRK, authorities readily admitted the likely lack of video was an impediment to their efforts but said they were initially focused on finding out who had been killed.

Those efforts appear to have been successful.

According to a press release issued late Tuesday night, two teenage boys were charged with murder; the victim’s identity, however, has yet to be made public.

The Homicide Unit and Crime Scene Units conducted the scene investigation and recovery of the victim with the assistance of the Harris County Institute of Forensic Sciences. Investigators learned from witnesses the victim was possible a missing person last seen with friends Leroy Celestino and Christopher Paz both 17-years-old. Homicide investigators have now charged both Celestino and Paz with murder in the death of the victim.

“Both defendants are currently in the Harris County Jail on unrelated charges,” the press release continues. “No clear motive has been established for the murder.”

According to Harris County jail records reviewed by Law&Crime, Celestino is not currently jailed under the name provided by police.

Paz, on the other hand, is currently incarcerated on charges of assault, murder and tampering with evidence related to a human corpse.