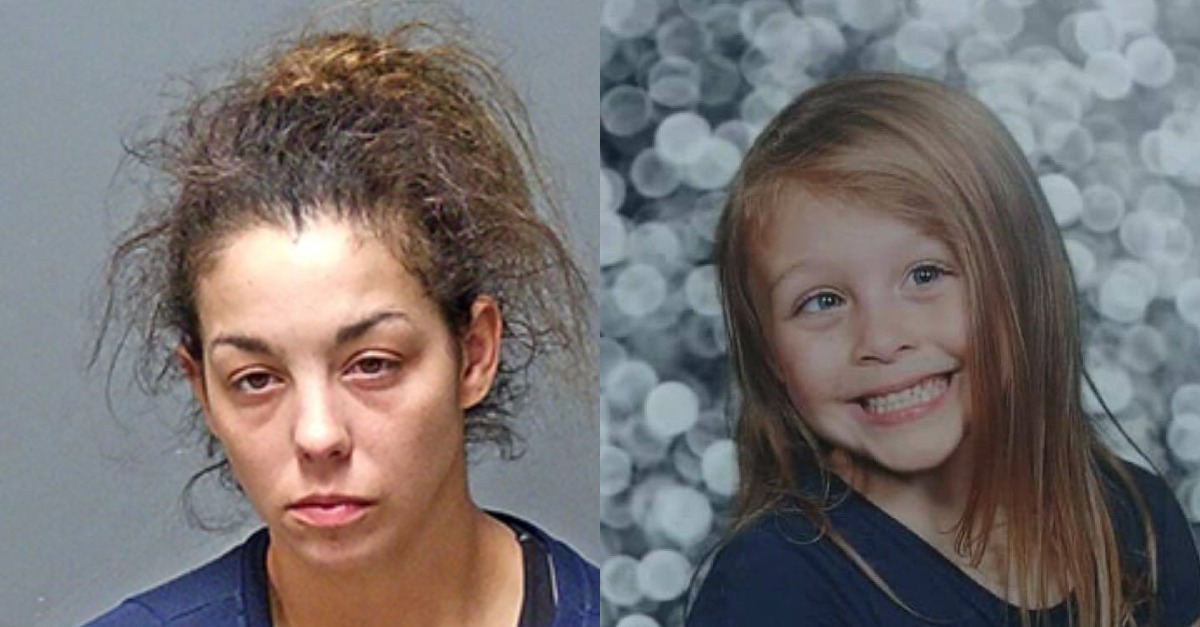 The stepmother of a missing 7-year-old girl from New Hampshire was arrested on Wednesday as part of an increasingly winding investigation into the child’s years-long disappearance.

The arrest comes the day after Adam Michael Montgomery, 31, was arrested and charged with several crimes in slightly removed connection with his daughter’s unknown whereabouts.

Seven-year-old Harmony Montgomery was last seen sometime in late 2019. Adam Montgomery and Kayla Montgomery have been estranged since October 2021, according to an account cited in court documents obtained by Law&Crime on Wednesday.

In a police interview late last year, Kayla Montgomery told Manchester investigators that, in addition to not seeing her husband for the past four-plus months, she had not seen Harmony Montgomery since a morning in November or December 2019. That morning, Kayla Montgomery allegedly told police, her since-gone husband said he was taking his daughter to stay with her mother in Lowell, Mass.

Authorities allege that Kayla Montgomery unlawfully obtained a meager $1,500 in food stamp benefits through a period spanning December 2019 and June 2021 “by failing to remove Harmony Montgomery from [her] family account” with the Granite State agency that provides public assistance and by “continuing to collect food stamp benefits for Harmony, despite the fact that Harmony was no longer living with Kayla and Kayla’s husband, Adam Montgomery.”

The multi-agency attention to a relatively small-bore charge against Kayla Montgomery could suggest that law enforcement is chasing down all relevant angles–and those tangentially related–in an effort to obtain more information about the missing girl.

Though Harmony Montgomery was last seen in late 2019, the mystery of her disappearance was only made known to authorities late last week.

Adam Montgomery, during his own police interview, allegedly gave “contradictory statements” when quizzed by investigators and eventually asserted his right to remain silent when pressed about concerns over his daughter’s safety.

“I have nothing else to say,” he allegedly repeatedly told police.

While Harmony Montgomery’s case has recently become a national news story rife with speculation, the fact of her unknown status has long had a stark impact on family members who love her.

According to Inside Edition, the girl’s younger brother, 5-year-old Jamison Montgomery, misses his sister and longs for her return. The boy was adopted by Blair Miller and Johnathon Miller in November 2019.

“We can think of examples where he’s been at a park and he’ll ask for his sister or see someone who reminds him of his sister,” Blair Miller told the TV show. “And that’s heartbreaking. It really is.”

“Harmony was the only thing consistent in Jamison’s life, through unification with the mom, back into foster care, Harmony is all Jamison had,” Johnathon Miller recently told Fox News.

. @BobbittMiller and I know there were key developments today related to #HarmonyMontgomery – we hope the focus remains on finding Harmony. Thank you @InsideEdition for sharing our son’s bond with his sister. pic.twitter.com/CWOgN8Mo0k

In a recent video, Jamison Montgomery is asked whether he loves his sister and replies in the affirmative before singing her the “Happy Birthday” song.