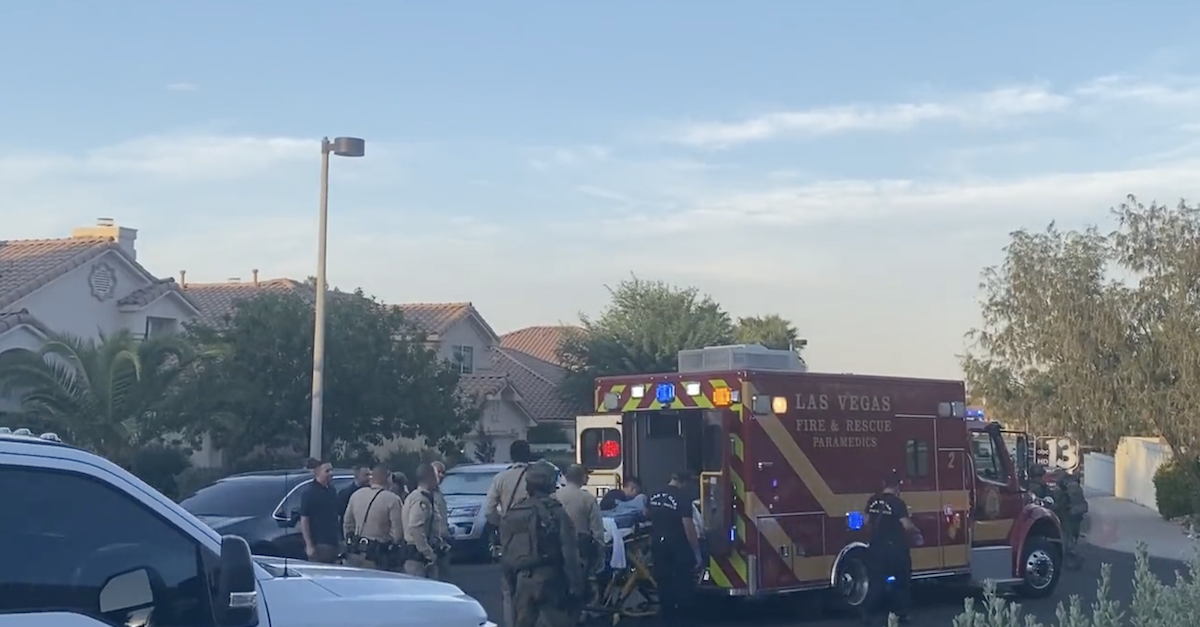 Robert Telles, the elected public administrator for Clark County, Nevada, was taken from his home on a stretcher and placed in am ambulance after being arrested on suspicion of murdering investigative reporter Jeff German. (screenshot from Twitter video from Brett Clarkson of the Las Vegas Review-Journal)

Police on Wednesday arrested the elected public administrator of Clark County, Nevada, on suspicion of murder in the stabbing death of an investigative reporter who’d written several articles about problems in his office.

A Democrat, Telles lost his re-election bid in June’s primary amid reporting from German about problems in his office. German, 69, was still investigating Telles when he was found dead of stab wounds outside his home Saturday about 10:30 a.m., having recently filed requests for public records pertaining to Telles and three other county officials, according to the Review-Journal, including one with whom Telles is allegedly involved in an inappropriate relationship. 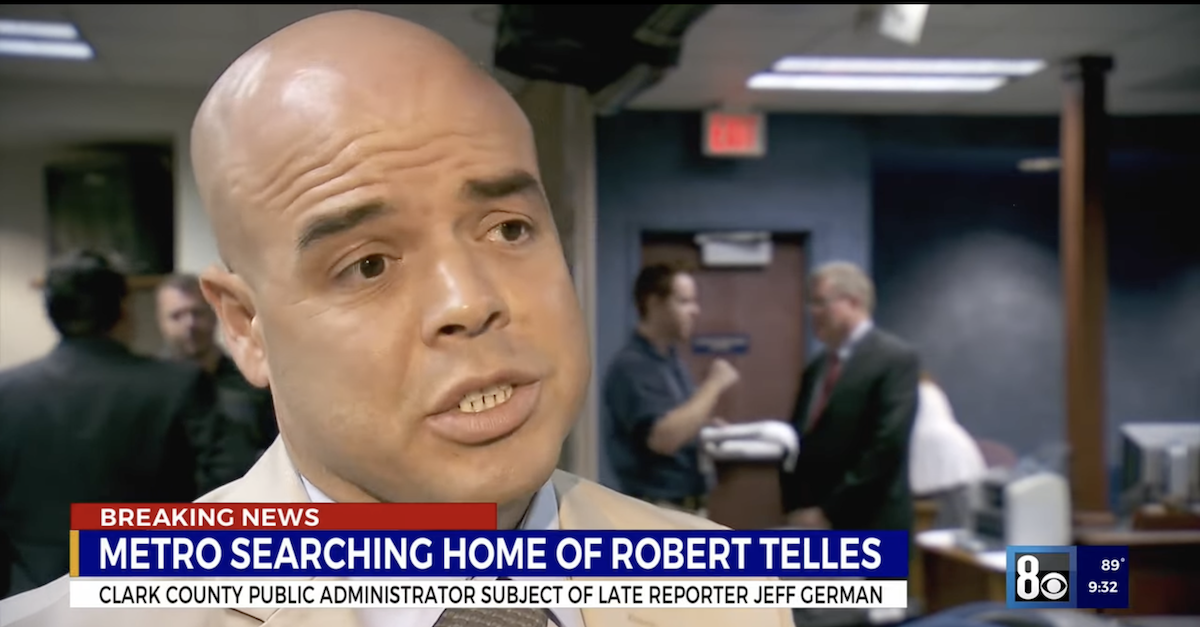 Telles reportedly met with police on Wednesday, and video posted on Twitter showed him returning to his home about 2:20 p.m. in a white hazmat-style suit while being questioned by reporters as he opened his garage door.

“Did you do this? Did you commit this murder?”

“Why did police tow away your vehicle?”

“Can you tell us anything?”

Rob Tellus has returned to his home after sources tell @8NewsNow he was talking to investigators in connection to the Jeff German case. pic.twitter.com/sfrUXWfCb9

Telles said nothing. About four hours later, “police had returned in tactical gear and were surrounding the home while Telles remained inside,” according to the Review-Journal. News of his arrest started spreading about 6:30 p.m., with video posted on Twitter showing him being brought out of his home on a stretcher and placed in an ambulance that left with a police escort.

BREAKING: Clark County Public Administrator Robert Telles is taken out of his house on a stretcher and loaded into an ambulance. Telles has been arrested in the slaying of @reviewjournal investigative reporter Jeff German. Story: https://t.co/vAhxjgdlzU pic.twitter.com/heEsWlBvJr

Telles, 45, has been a licensed attorney with the Nevada State Bar since Jan. 9, 2015. He earned a law degree from the University of Nevada-Las Vegas School of Law in 2014, then opened his own probate and estate planning firm, Accolade Law, in February 2015, according to his LinkedIn profile. He was then elected public administrator of Clark County in November 2018 and took office in January 2019. The position builds on his law practice, as the public administrator is tasked with overseeing property for deceased people while a family or estate manager is found. 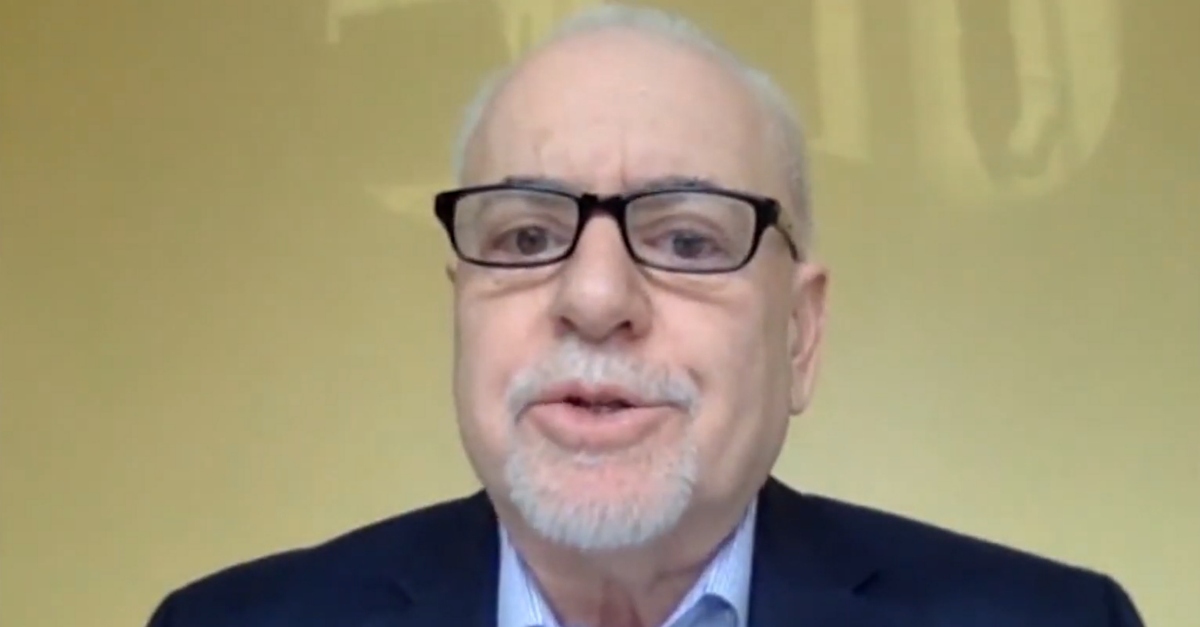 Before becoming a lawyer, Telles spent nearly seven years as a technician for heating, ventilation, air conditioning and refrigeration at the College of Southern Nevada.

Police have released no details about their investigation, but Telles hasn’t been shy about his dislike for German, having criticized the reporter in several tweets over the summer.

Authorities only confirmed on their official Twitter account late Wednesday that a suspect was taken into custody.

The suspect in the homicide that occurred on September 2, 2022, has been taken into custody.

On Tuesday, police released surveillance video and still images of a murder suspect, as well as photos of a red SUV that reporters in Las Vegas have said fits the description of Telles’ vehicle.