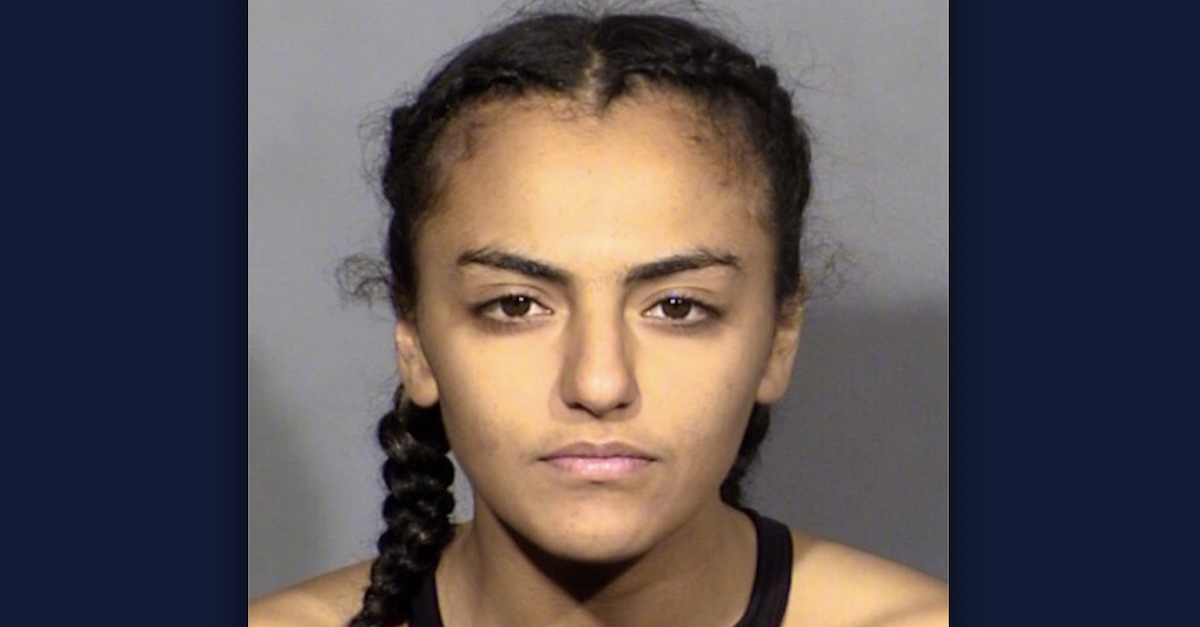 A 28-year-old Las Vegas woman who made headlines months ago when she claimed she was arrested for being “so good-looking” after skipping out on her restaurant tab is now accused of stabbing her 62-year-old mother to death.

Hend Karim Bustami was taken into custody in California on Wednesday and will soon be charged with one count of open murder in Nevada, authorities announced.

According to a press release from the Las Vegas Metro Police Department (LVMPD), officers responded at approximately 2:34 a.m. on Oct. 26 to a 911 call about an injured person inside a residence on June Flower Drive.

Upon arriving at the scene, authorities said, first responders entered the home and found an unresponsive adult female who appeared to have sustained “multiple lacerations.” Medical personnel dispatched to the address pronounced the woman dead at the scene. Bustami’s mother was not identified by LVMPD or the Clark County Coroner’s Office

Investigators with the department’s Homicide Section said evidence indicates that the victim “was involved in a verbal dispute with her daughter, later identified as 28-year-old Hend Bustami,” just before she sustained her fatal injuries. Authorities said Bustami killed her mother, fled the scene and left the state.

Not long after the body of Bustami’s mother was discovered, investigators said, officers with the Barstow Police Department and the California Highway Patrol located and detained Bustami in California. At approximately 7:59 a.m., she was taken into custody.

According to a report from the Las Vegas Review-Journal, Bustami or one of her siblings appeared to have placed the 911 call to report the mother’s death.

“At approximately 2:30 in the morning, a 911 dispatcher received a phone call from a frantic female stating that her mother was dead,” LVMPD Lt. Dave Valenta reportedly told the newspaper. “Then the line was disconnected.”

A neighbor who has lived next door to Bustami and her mother for the past two years reportedly told Las Vegas NBC affiliate KSNV that police were often at the house responding to domestic disputes between the mother and daughter, but said he was still shocked to learn about what police say transpired.

“I would have never seen this coming. She was never aggressive or mean toward anybody in the neighborhood,” neighbor Andres Moreno reportedly told the station.

Friends of the deceased mother reportedly told KSNV that on the night before her death, the woman told them that she feared her own daughter.

“Yesterday, she was at a friend’s house and she said she told her, ‘I’m worried to go home, maybe she will kill me,'” a friend reportedly told the station.

Bustami on Aug. 31 was reportedly arrested in Harry Reid International Airport and charged with violating airport conduct. According to a report from Los Angeles CW affiliate KTLA, police were called to the airport in regards to an adult female who left a Chili’s restaurant without paying her bill.

“[O]fficers working D gates were notified by TSA that [a] female matching that description was observed sleeping near the security checkpoint, hindering their operations,” a probable cause affidavit obtained by the station reportedly said.

Bustami was later located near the baggage claim area where she was allegedly “belligerent with officers, saying she was being harassed because cops [had] never seen anyone as pretty as her,” per the report. While being placed under arrest, Bustami allegedly said that “she was going to spit on all [the officers] and that officers were perverts and were trying to rape her because they [had] never seen anyone as good-looking,” police reportedly wrote.

Bustami is currently being held in the San Bernadino County West Valley Detention Center on the charge of being a fugitive from justice, jail records show. The records further indicate that she is “ineligible” for bond. She is awaiting extradition back to Clark County where authorities say she will be charged with open murder.