‘My Dad’s Got 28 Guns’: 11-Year-Old Charged with Felony in Upstate New York After Allegedly Threatening to Kill Classmate Who Wouldn’t Let Him Cheat in Science Class 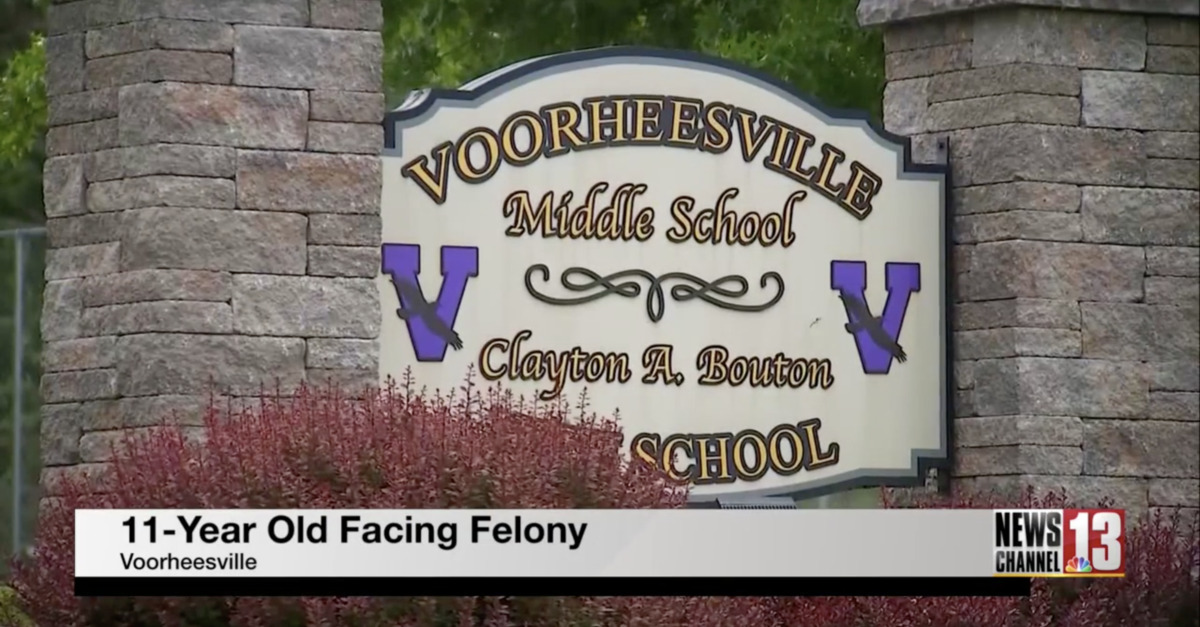 An 11-year-old boy in upstate New York was arrested and charged with one felony count of making terroristic threats after allegedly telling a fellow student in science class that he was going to kill them.

According to the Albany Country Sheriff’s Office, the incident occurred at a middle school in the small village of Voorheesville, N.Y. on Wed., May 26.  That date places the incident just one day after a gunman massacred 19 students in Uvalde, Texas, during the midday hours of Tues., May 25.

The threatened student reported what had occurred to school officials who, in turn, contacted law enforcement.

Albany County Sheriff Craig Apple praised the student who made the report, according to Albany NBC affiliate WNYT.

“The last thing we want to be doing is locking up young kids,” the sheriff told the TV station. “We have a zero tolerance policy for this, and if you make stupid statements, you can expect to be arrested.”

Apple said no actual guns were involved but that the defendant mentioned his father’s large collection of firearms.

The sheriff described the incident as having started when the boy asked the other student for answers during a science lab. The other student, also a boy, refused to give away his answers.

“That’s great, then I’m going to kill you, leave it at that,” the boy allegedly said.

A third student then allegedly intervened and told the boy that he couldn’t say things like that to people.

Immediately, after that, according to Apple’s account, the boy said something to the effect of: “My dad’s got 28 guns and I have access to them. You just wait and see what happens.”

The teacher was then told by the student who stood up to the alleged bully. The school then conducted an internal investigation into the alleged threats and, the next afternoon, contacted law enforcement.

The third student is also reportedly a boy.

According to Apple, the boy’s father was upset about the incident but cooperated with the investigation. All 28 of those guns were reportedly accounted for, the ACSO told the TV station.

The defendant was placed in custody and charged by way of an appearance ticket.

Voorheesville Schools Superintendent Frank Macri issued a statement to the community after law enforcement was contacted:

I am writing to inform you about an incident that occurred in the Middle School on Wednesday, May 25 that was reported to the Albany County Sheriff’s Department by the district.

The district worked with the Albany County Sheriff’s Department to investigate allegations that were reported to the district Wednesday, after school hours. The joint investigation concluded late in the evening on Thursday, May 26. We commend the students and community who came forward with information about a threat that was made from one student towards another student that led to a student arrest. At no time during the day was there an immediate danger to the students.

The safety and security of our school community remains the number one priority and we thank Albany County Sheriff’s Department for their ongoing support. Please reach out to your child’s building principal if you have questions or concerns.

In an interview with WNYT, Apple said he couldn’t remember filing a felony, gun-related arrest against anyone that young in the past.

In April of this year, a 15-year-old boy in Voorheesville was arrested and charged with making a terroristic threat after several students said he was threatening to bring a gun to school. That boy was arraigned and then placed under house arrest, according to Albany ABC affiliate WTEN.