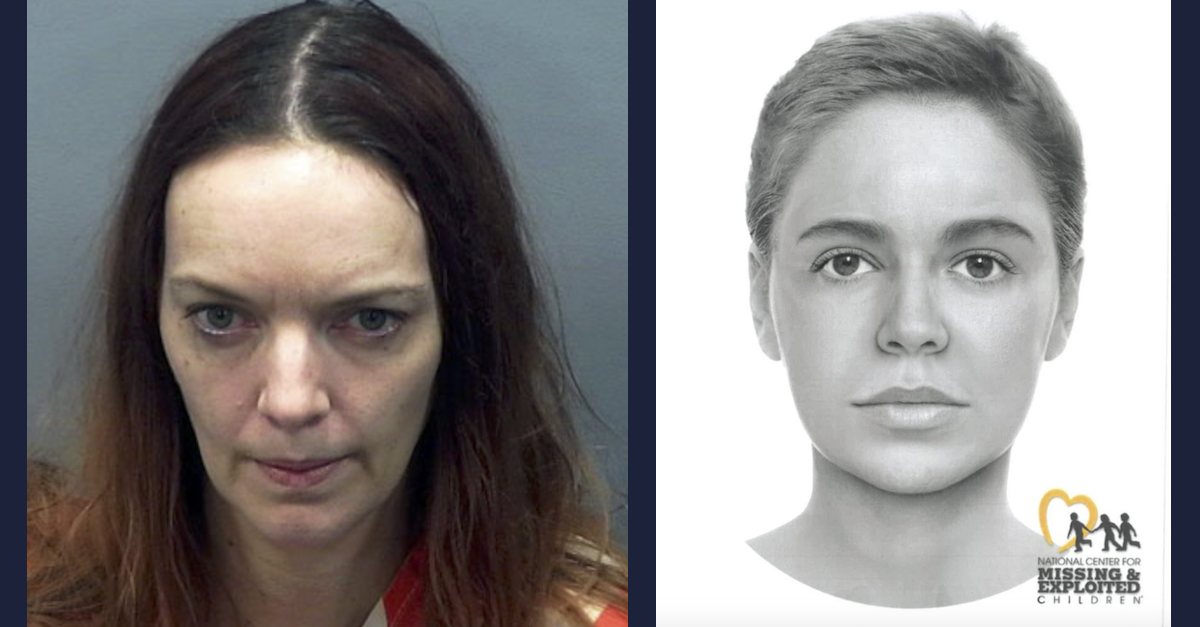 Amber Langley (L) and a composite sketch of her daughter Cadence Langley (R).

Cadence Langley was just 14 years old when someone shot her in the back of the head and dumped her body in a livestock watering box in a rural part of Safford, Arizona in October 2020.

Late last month, her mother Amber Langley, 38, was arrested on fraud charges for allegedly continuing to collect her daughter’s government assistance benefits for nearly two years after the autistic girl’s death.  Those benefits added up to the tune of some $4,700, according to the Gila Herald.

On Oct. 26, 2020, when Cadence’s body was originally discovered by a quail hunter, investigators had no idea who she was. The girl was found on a ranch, wrapped in a tarp, and placed in a 4-by-2-foot trough, partially submerged, with a collection of toys near her body.

A forensic pathologist determined the victim, long known as Artesia Doe after the name of a nearby town, was between the ages of 14 and 22 years old and had been murdered, Graham County Sheriff P.J. Allred said in December 2020, according to the Eastern Arizona Courier.

“Somebody had to remove the cover, put her in it and cover it back up,” Allred told the paper, describing the float box.

Working with the Graham County Sheriff’s Office, a likeness was generated by the National Center for Missing and Exploited Children “based on the girl’s measurements and other information,” the Herald reports. The girl’s NCMEC page has since been taken down.

For years, investigators had little luck. No one matching Cadence Langley’s description had been reported missing in the Gila Valley region of the Grand Canyon State. Law enforcement then set their sights wider. They eventually turned to DNA testing.

“We will figure it out,” Allred said when officially classifying the case as a homicide. “We’ll keep plugging away at it until we resolve it. Somebody wrapped it up in some stuff and put it where they put it.”

According to the Herald, GCSO Sergeant Mark Smith testified at Amber Langley’s preliminary hearing on the fraud charges earlier this week. He reportedly said a tooth, a hair, and a piece of bone led the investigation to identify the girl’s mother as a suspect in her murder through the use of familial DNA testing. After working with the FBI, Smith said, investigators determined the deceased was Amber Langley’s child and then found out that the defendant was still receiving the girl’s government benefits.

A defense attorney adamantly insisted the state was getting far ahead of itself and complained that Amber Langley was subject to a $500,000 bond on theft and fraud charges, the local paper reported.

Defense attorney Dennis McCarthy raised constitutional issues regarding the actual charges before the court and the presentation that the state gave to the court before Justice of the Peace District 1 Judge Gary Griffith.

A thorough writeup of court proceedings by Jon Johnson notes the arguments that McCarthy raised on his client’s behalf:

We have cases coming through this court every week involving fraudulent schemes and artifices and money being taken and the bonds are never half million dollars cash or paper. This is ludicrous. It’s a violation of the 8th Amendment of the United States Constitution of excessive (inaudible). My client’s rights are being deprived by that excessive bond. If the state has a case, then file . . . if they’ve got DNA, if they’ve got witnesses, then they need to file the case and get a bond on that case. But they haven’t. It’s improper for the court to take Mr. Bennett’s arguments into consideration, in my estimation, on a $5,000 case.

“This is a fraud scheme that’s before you,” the defense attorney reminded the judge.