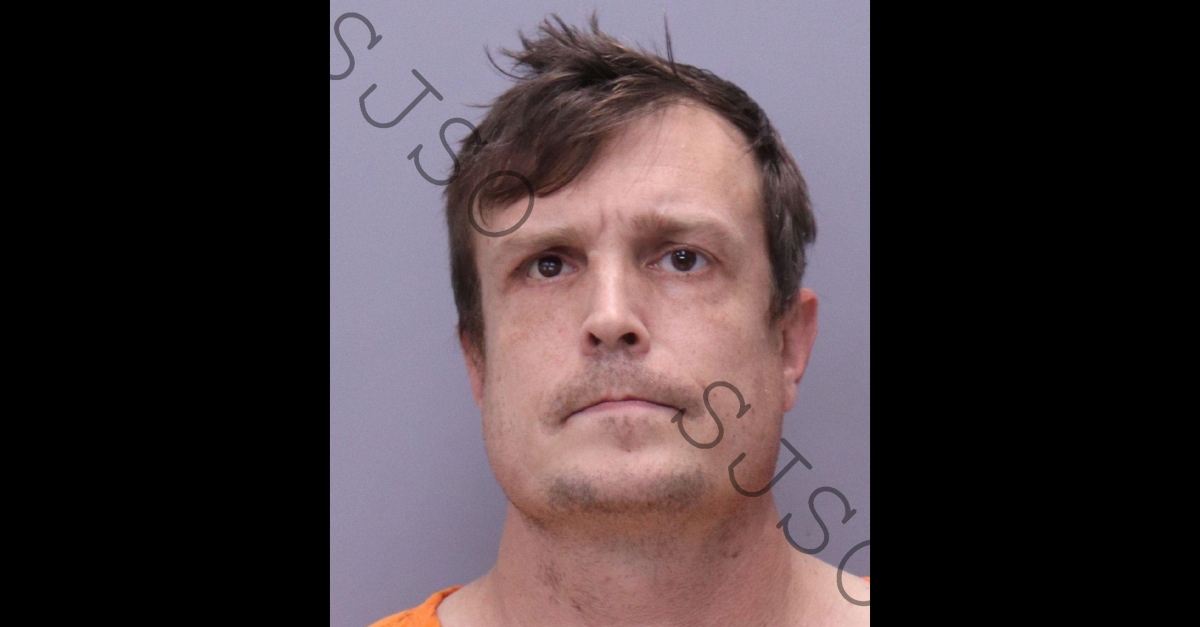 A man was arrested less than a day after officials announced him as the suspect who allegedly killed his girlfriend and her father. John Peyton Scott III, 41, is held without bond at the St. Johns County Jail in Florida, online records show.

Authorities across state lines in Alabama say he killed his girlfriend Sharon Tarwater Whited, 40, and her father Chester E. Tarwater Jr., 75, at the home they all lived at in the city of Helena.

Law enforcement’s search for Scott came to an end in St. Johns County, Florida on Monday. Deputies there said they received information that Scott was traveling nearby. According to authorities, they found Scott and performed a PIT maneuver. Scott surrendered immediately, they said.

“Her and her dad did not deserve anything like this,” Allison Proctor, a friend of Sharon’s for nine years, told WBMA-LD in a Monday report.

John Peyton Scott III was arrested in St. Augustine, Florida this afternoon. Investigators believe he is the one responsible for two murders in Helena last week.

Just a few hours before his capture, @abc3340 spoke to those who knew the victims.

“To lose your parent this young, it’s completely robbed of a childhood,” Jason Pruitt, a friend of Sharon’s for 25 years, told WBMA-LD.

Chester “Chuck” Tarwater Jr. and 40-year-old Sharon Tarwater Whited were found slain Wednesday afternoon when a young boy discovered his grandfather’s body in the hallway of the family’s home on Piney Woods Drive.https://t.co/bfVaPaqu2M

Officials initially only called Scott a person of interest.

“Please call us,” Helena Police Department Chief Brad Flynn said in a press conference on Thursday. “We just want to talk to you. We know that he has to be upset and worried, and we want to speak with him and try to arrange a time to sit down and talk.”

Naturally, the tone of that entreaty changed on Sunday night when officials said he was the person who killed his girlfriend and her father.

Scott told the court in an initial court appearance that he needed to speak to counsel before deciding whether to fight extradition to Alabama.

John Peyton Scott III, facing two warrants for capital murder in Helena, appears in Florida court and tells judge he wants to speak to a lawyer before deciding whether to waive extradition or fight it. pic.twitter.com/MLZiwn7Dkw

“Any time I needed Sharon, I just had to pick up the phone,” he said. “It didn’t matter what it was. When it was. I just had to call her.”

Even their children were close to her family. Proctor said their daughters danced together and had sleepovers. Pruitt likewise said his children were friends with Sharon’s daughters.

“I’ve always loved her,” Pruitt said. “We’ve always been friends.” He wished he could tell her that again.