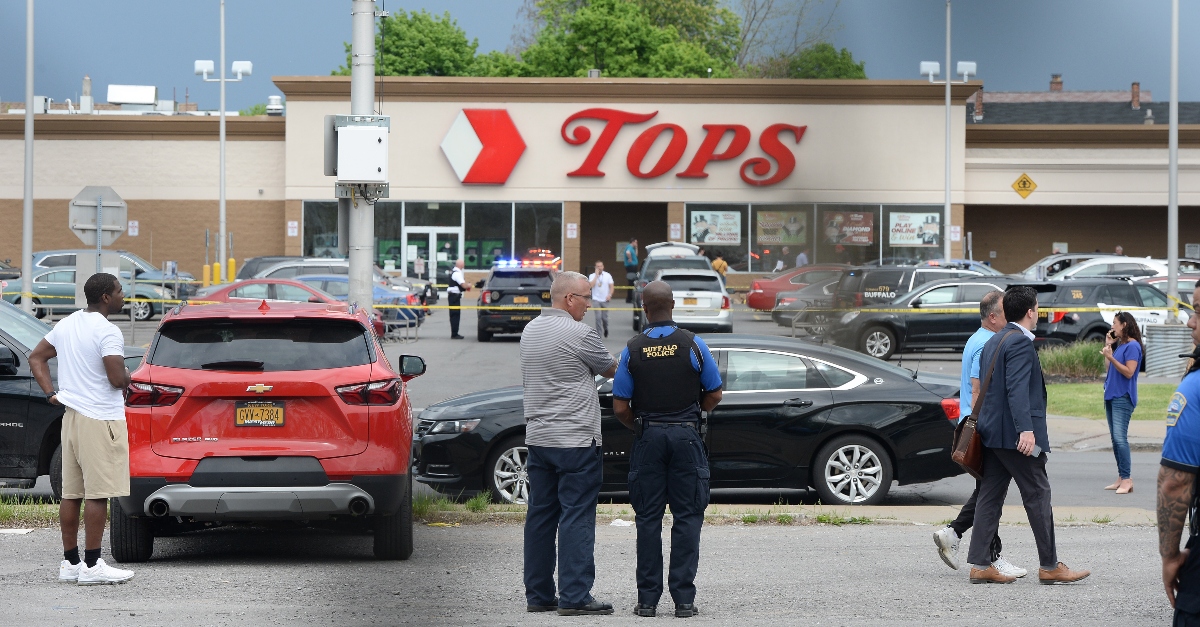 A man called in racist threats to companies across the country, including at a supermarket that was targeted in a recent anti-Black mass shooting, federal prosecutors said on Friday. Joey David George, 37, was arrested Thursday and charged in Washington State federal court with making interstate threats, the U.S. Department of Justice announced.

He allegedly aimed his ire almost exclusively toward Black people, though in one instance prosecutors say he targeted Hispanic people too.

It was only a few days ago when he allegedly contacted a Tops Friendly Market in Buffalo, New York.  He identified himself as “Peter” to a store employee in a July 19 call, investigators said in a complaint.

“The caller asked how many Black people were in the store,” authorities said. “He said he would make the news if he shot and killed all of the Black people, including all of the women, children, and babies. He asked if the employee had cleared out the building. He said there was a chance he was already in the store, or somewhere nearby. He said that if he did not see anyone at the store, he would travel to the Jefferson Tops store. In May 2022, a gunman killed ten people in a racially-motivated attack at the Jefferson Tops store. During the July 19 call, ‘Peter’ said he was a really good shot and could pick off people from the parking lot. He said he had assault rifles and other weapons.”

George allegedly called the Tops again on July 20. He ranted about a “race war,” authorities said.

“This is what happens in a blue state,” he said in the complaint.

In a similar incident, George allegedly called from the same number on May 12, reaching Shari’s Restaurant and Pies in San Bruno, California. An employee picked up. Identifying himself as “Tony,” George threatened to shoot Black or Hispanic patrons if the restaurant did not close with 20 minutes. San Bruno cops responded. One of them called the suspect number and talked to a man who identified himself as “Tony Sumorrah.”

“The individual told the SBPD Officer that he called the Shari’s restaurant because he wanted to attack Black people and strike fear into the Bay Area’s Black community,” authorities wrote. “He stated Black people are not human, but rather ‘sub-humans.’ He said he was proud of his actions because he instilled fear in the employees and customers of the restaurant.”

Authorities tracked this number to George.

According to the complaint, he called companies and claimed to have some sort of weapon, insisted he would act on it, and he freely confessed when authorities called him back.

“I felt Black people do too much and have it coming,” he allegedly told police after he threatened the Verilife Dispensary in Rockville, Maryland on Sept. 11. ” I did it for fear.”

Under the name “David Lester,” he had allegedly called the business, saying “he was sick of ‘n***ers’ harassing his girlfriend and he was on his way to the business to shoot and kill ‘n***ers.'”

That same day, he called a Denny’s in Enfield, Connecticut, threatening to throw a bomb through the window, authorities said. On Jan. 16, he allegedly called a dispensary in Seattle, Washington.  He said he had a gun and would shoot any Black people there when he arrived, authorities said. The dispensary said an employee got a similar threat at its Skyway, Washington, location.