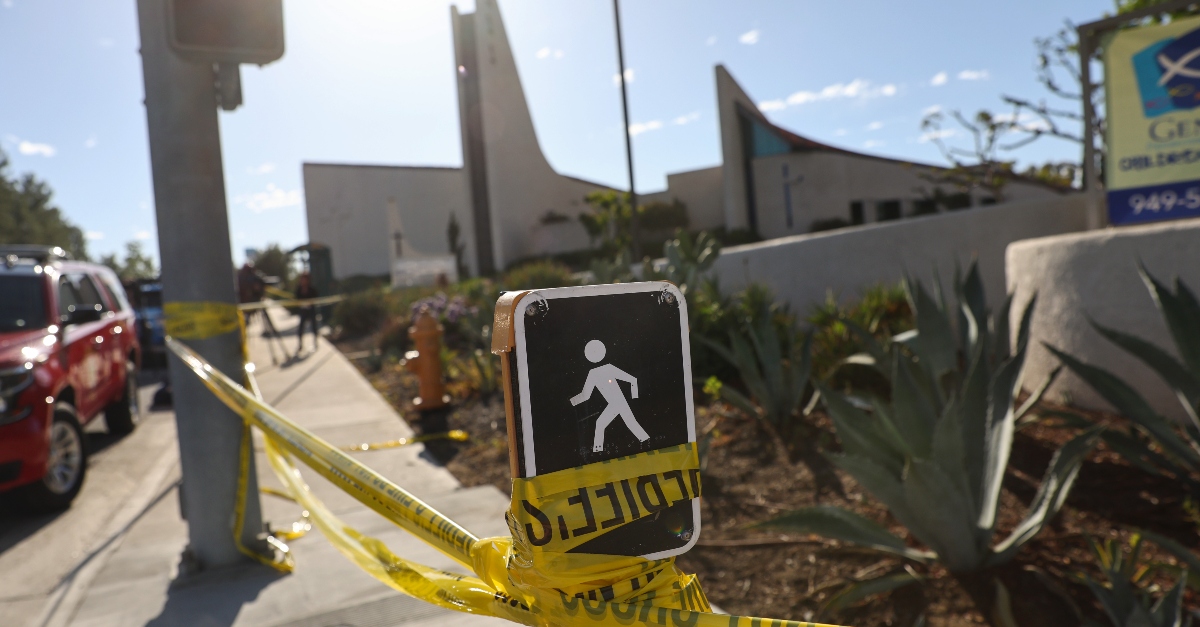 Authorities taping off the Geneva Presbyterian Church on May 15, 2022 in Laguna Woods, California.

In addition to identifying a heroic, slain victim and the man the suspected of killing him, authorities revealed the alleged motive behind a mass shooting that occurred Sunday in a church in Laguna Woods, California.

The shooter is a U.S. Citizen and an immigrant from China who was angry about the situation between his birth nation and Taiwan, Orange County Sheriff Don Barnes said in a press conference on Monday. Accordingly, the suspect allegedly targeted a church with Taiwanese congregants.

The lawman did not speak the suspect’s name, but his office identified the individual as David Chou, 68.

“It is believed the suspect involved was upset about political tensions between China and Taiwan,” Barnes told reporters.

“Without the actions of Dr. Cheng, it is no doubt that there’d be numerous additional victims in this crime,” the sheriff said.

Dr. John Cheng, the 52-yr-old man killed in the Laguna Woods shooting yesterday, had tried to disarm the gunman. Other parishioners were able to then hogtie the suspect. “W/o the actions of Dr. Chang, it is no doubt that there have been numerous additional victims in this crime.” pic.twitter.com/01Q4E2UCSI

The shooting happened Sunday at the Geneva Presbyterian Church. The Irvine Taiwanese Presbyterian Church, which uses the space for services, was holding a lunch banquet celebrating the return of one of their pastors, who had been out on a mission trip to Taiwan.

Chou drove to the church on Sunday, bringing two handguns and backup magazines with him, authorities said. He also allegedly placed Molotov cocktail-like incendiary devices throughout the church. During lunch, he secured the doors with chains, and tried to disable locks with superglue, Barnes said. Chou allegedly started shooting, wounding five people with gunshots.

There were approximately 50 people attending the banquet, most of them elderly with ages up to 92, authorities said. Cheng, one of the youngest people there, rushed Chou and tackled him, authorities said. That act of heroism came at the cost of his own life.

“Dr. Cheng, 52, of Laguna Niguel, took heroic actions that day,” he said. “In fact, I want to pause and tell you that Dr. Cheng is a hero in this incident.”

Cheng died at the scene.

“He sacrificed himself so that others could live,” Orange County District Attorney Todd Spitzer said. “That irony in a church is not lost on me.”

Authorities previously lauded churchgoers with subduing the suspect and hogtying him with an extension cord, though they did not yet reveal Cheng’s sacrifice.

Authorities previously said that four of the injured people were in critical condition, while a fifth received minor injuries. In an update Monday, Orange County Fire Authority Division Chief Mike Contreras said two people were in “good” condition upgraded from stable and two others were in stable condition, but Contreras did not have an update on the status of a fifth individual.

The investigation is ongoing, with officials saying they executed search warrants on Chou’s vehicle in the parking lot, and his residence in Las Vegas, Nevada. Spitzer announced charges of first-degree murder with a use of a gun, including special circumstances of lying in wait. There are also five counts of attempted murder.

The question now is whether authorities will also pursue hate crime charges.

“And we do know that based on information we’ve collected–and I’m not going to go to go onto the details of that evidence–was a politically motivated hate incident, a grievance that this individual had between himself and the Taiwanese community at large,” the sheriff said.

Chou’s “hatred of Taiwan manifested” from his time living there in the past, “possibly in his youth,” the sheriff said.

“He was not well received while living there,” the sheriff said, citing evidence collected.

Spitzer emphasized Chou had a bias against the Taiwanese people or country, but said they have to let the investigation play itself out, so they can prove a hate crime enhancement beyond a reasonable doubt.