Kentucky Man Came Home and Told His Family That He Killed a Woman, Wrapped Her Body in a Sleeping Bag and Duct-Taped Her Mouth and Eyes: Police 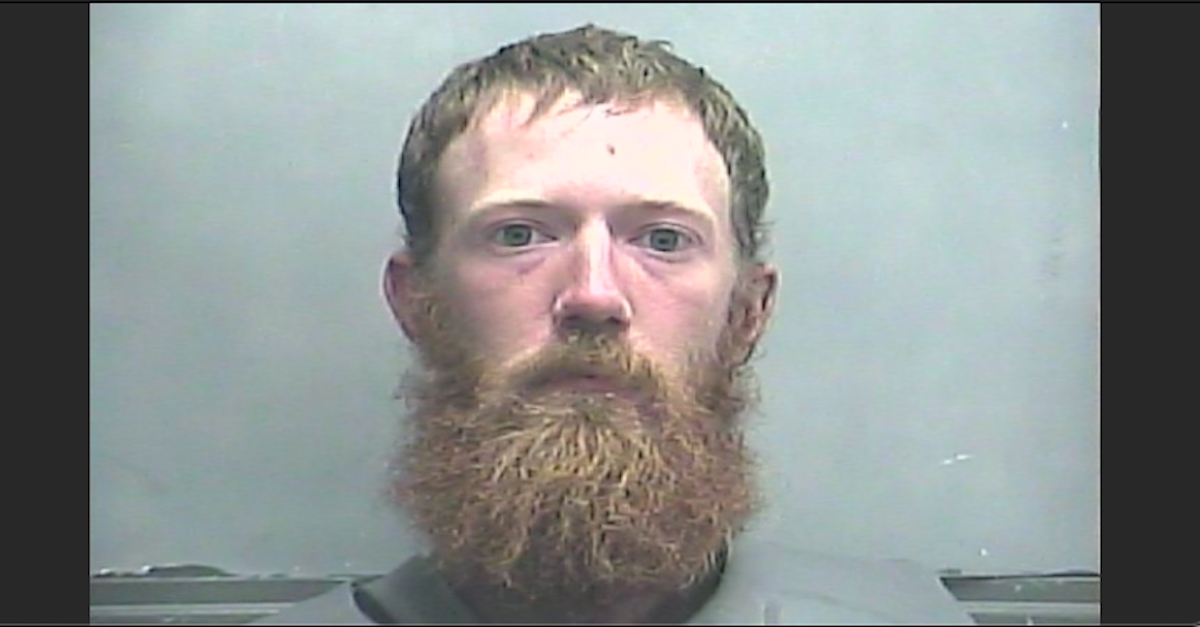 A Kentucky man was arrested and charged with multiple felonies after law enforcement authorities allegedly found the body of a woman inside of his pickup truck wrapped in what was described as a sleeping bag. The victim’s mouth and eyes had been duct-taped, according to police.

Denny Christopher Rumfelt, 29, of Vine Grove, was taken into custody by deputies with the Meade County Sheriff’s Office on Wednesday after his family told investigators that he admitted to a brutal murder, local FOX-affiliated news station WDRB-TV reported.

According to a police report obtained by the station, Rumfelt returned to his home in Vine Grove on Wednesday at approximately 3 p.m. where he met with his mom, dad, and brother. Rumfelt’s family told police that, shortly after he arrived, the suspect told them he had killed a woman and that her remains were still in his car parked in front of the house.

Rumfelt was allegedly standing in the doorway of his house when he told them what he did, saying “[the body] is wrapped up in carpet and has tape around it,” per the police report.

One of Rumfelt’s family members called the sheriff’s office and deputies responded to the scene soon after. Police said that upon their arrival Rumfelt simply walked out of his house and surrendered.

Investigators obtained a warrant to search Rumfelt’s car — a green 1997 GMC Sierra pickup truck. Deputies searched the vehicle and allegedly confirmed the 29-year-old’s murderous claim. The deputies executing the warrant discovered a “multi-colored sleeping bag” that had been wrapped multiple times in duct-tape. There appeared to be something large inside the sleeping bag, which police said was positioned on the passenger side of the pickup truck.

Deputies removed the sleeping bag from the vehicle, placing it on top of a plexiglass table and requesting that a coroner be dispatched to the scene. Upon the coroner’s arrival, authorities cut the duct-tape away from the sleeping bag and found a woman’s corpse inside.

The body was removed from the bag and investigators observed that the corpse “had duct tape around her mouth, as well as a piece of tape over her eyes,” according to the WDRB report.

During an interview with Rumfelt later that evening, investigators said they found blood on his clothing and on his ears. He also appeared to have recently suffered multiple lacerations to both of his arms — one of which reportedly required stitches — as well as a cut on one of his fingers.

Online records show that Rumfelt was charged with domestic violence murder, tampering with physical evidence, and abuse of a corpse. He is being held without bond at the Meade County Detention Center.

The identity of the woman whose body was allegedly found in his car had not been determined as of Thursday afternoon. The Meade County Sheriff’s Office did not immediately return an email from Law&Crime seeking additional details on the case.

The News-Enterprise mentioned a local named “Denny C. Rumfelt” back in 2012, noting that he had graduated from basic training in the Air Force.

“Air Force Airman Denny C. Rumfelt graduated from basic military training at Lackland Air Force Base in San Antonio,” the paper said, noting that Rumfelt was a a “2011 graduate of Meade County High School” and from Vine Grove. A LinkedIn page for a person of the same name and from the same location lists Rumfelt’s occupation as an “Avionics Technician at AECOM.” AECOM is an engineering firm; avionics is a portmanteau of the words “aviation” and “electronics.” An April 2017 edition of the defunct Combat Airlifter publication identified Rumfelt as a Senior Airman in the 314th Aircraft Maintenance Squadron in Little Rock, Arkansas.