‘I’m Glad I Killed That Motherf***er’: Wisconsin Stalker Linked to Decades-Old ‘Butcher Knife’ Stabbing Murder After Allegedly Bragging About It Behind Bars 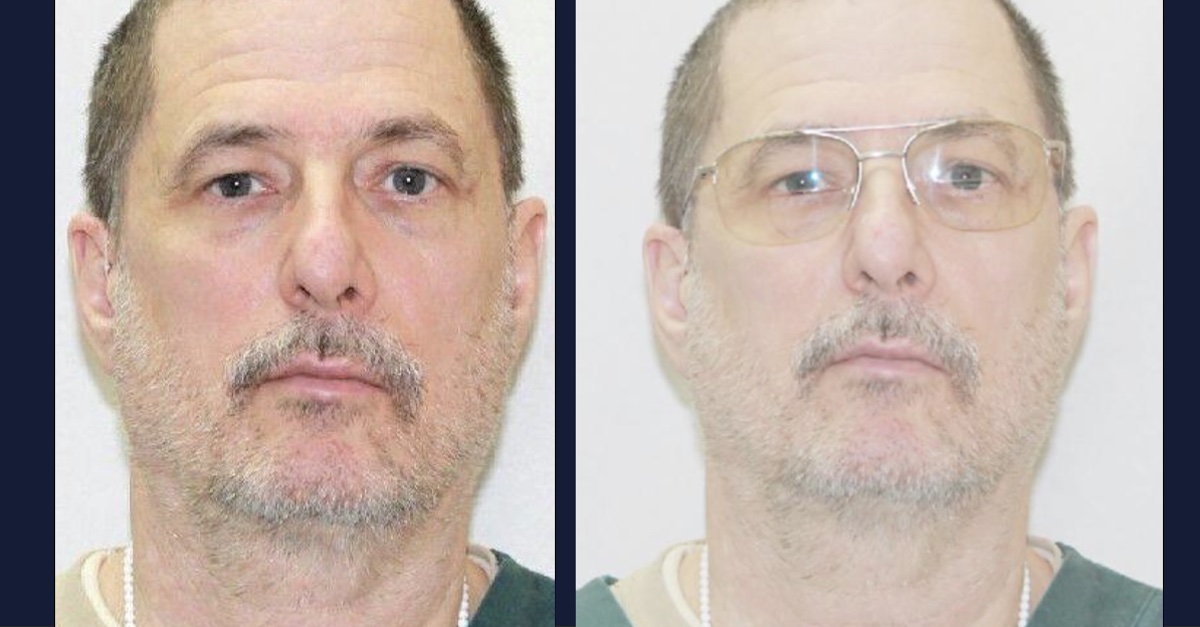 Donald Maier, pictured with and without glasses in Racine Correctional Institution mugshots from Feb. 2, 2020.

A 60-year-old Wisconsin inmate with a lengthy rap sheet has been charged with first-degree murder in connection with the long-unsolved homicide of a man found stabbed to death as he slept in a trailer home all the way back in July of 1985.

The Wisconsin Department of Justice identified Donald Wayne Maier as a suspect in the death of Benny Scruggs, 28.

“On July 17, 1985, twenty-nine-year-old [sic] Benny Scruggs was stabbed to death in his home on Travis Drive in Wisconsin Rapids,” the Wisconsin DOJ said in a press release. “Police were dispatched based on a call from a neighbor who was alerted by Scruggs’ wife Yvonne.”

Scruggs, pictured below, was stabbed with “one hell of a big knife, like a butcher knife” in his sleep and had “no defense wounds to his hands or arms,” according to the complaint — which quoted the autopsy findings of forensic pathologist Dr. Robert Huntington.

BREAKING: An autopsy showed Benny Scruggs was likely stabbed while he slept as he had no defensive wounds. The knife has never been recovered. https://t.co/bGlnUuE47t

According to the criminal complaint, it’s long been known that Maier had an affair with Scruggs’ now-deceased wife Yvonne Scruggs before the killing:

The Defendant and Yvonne had been fellow employees at a Woolco store four or five years earlier. He said they had been sexually involved with each other at that time, but he had not seen her after that until January or February of 1985 when he moved into his present residence. He said Yvonne had been paying a great deal of attention to him after he moved into the area. He said that about six weeks prior to Benny’s stabbing, the Defendant went over to the Scruggs’ trailer around 10:30 p.m. at Yvonne’s invitation. Benny was not at home at the time. The Defendant and Yvonne engaged in an act of sexual intercourse in the living room of the Scruggs home. About a week after Benny’s stabbing, Yvonne telephoned him and asked him to tell her what he knew about the police investigation. She told him that she told the police that she and the Defendant were simply friends and she expected him to tell the police the same thing if he were questioned about his relations with her. Later that day the Defendant told Detective Bates that after they had had sex Yvonne had told the Defendant that if the Defendant wanted her, she knew how to get rid of Benny.

Documents said that Yvonne Scruggs initially concealed from investigators the details of her sexual relationship with Maier.

“On August 27, 1985, Yvonne Scruggs admitted to Detectives Gardner and Bates that she had not told them of her sexual encounter with the Defendant because she did not think it was that important and because she was embarrassed to tell anyone that it had happened,” the complaint said. “She claimed it was her only sexual contact with the Defendant and denied saying that if the Defendant wanted her, she would get rid of Benny.”

The complaint, based on accounts of more than dozen witnesses (some identified by name and most of them not), said that Yvonne Scruggs made several eyebrow-raising statements over the years — some indicating she was responsible for the killing and others indicating that she knew who committed the crime but wouldn’t say [emphasis added to certain statements and details]:

On October 23, 1987, Detective Bruce Smolarek, now deceased, spoke with Witness 5 who was a friend of Yvonne Scruggs at and around the time Benny was murdered. Witness 5 told Detective Smolarek that for a couple years after Benny’s murder, on several occasions, Yvonne made the statement to her, “Do you think I could have killed Benny?” to which Witness 5 would respond, “I don’t know, did you?” and then Yvonne would not answer. They had little to no contact after 1986.

On August 20, 1987, Detective Smolarek and Detective Exner spoke to Cynthia A. Reas, now deceased, who stated that she and Yvonne had been close friends through high school. Approximately two months prior to Benny’s murder, Cindy and Yvonne were at the Wood County Courthouse for a WIC program social services function and Benny, Yvonne, and Victim 1 came into the room. Yvonne came over to Cindy, bent her face towards Cindy’s ear, spewed profanities about Benny and then stated that Benny had found out about her boyfriend, but it does not matter because she and Benny will not be together much longer. Then about two months after Benny’s murder, Yvonne called Cindy and asked her if she had heard about Benny’s murder, which Cindy had. Then Yvonne said, “everyone in town thinks I did it, what do you think?” to which Cindy replied, “Well, did you?” Yvonne did not answer.

On or about November 20, 2012, Detectives Andy Dewitt and Casey Labarre spoke to Witness 6 who had called the police after seeing an article in the local newspaper regarding the Benny Scruggs cold case homicide. Witness 6 told the detectives that between approximately 1989 and 1990 her son, Witness 7, who was also present for this police interview, was dating Yvonne, whom he had met at work, while Yvonne was married to Kevin Neukirchen, now deceased. During the time they were dating, Yvonne was visiting at Witness 6’s home and Yvonne told Witness 6 that she loved both men. Witness 6 told her she cannot have it both ways. Yvonne replied, “I killed one husband. I can kill another one.” Witness 6 told the officers those were Yvonne’s exact words. And Yvonne told Witness 6, “Oh, they’ll never get me for it anyway.”

Witness 7 told the detectives that he had been in the service in 1985 and knew nothing about Benny’s murder until Yvonne told him while they were dating. He asked her where Victim 1’s dad was, and Yvonne responded, “He’s not with us anymore.” When he asked her how it happened, she said, “Well, I killed him.” He asked her how it happened. Yvonne said that she was in Victim 1’s room, she came into their bedroom and there was a knife in his chest. Witness 7 asked her how that happened, and she said, “Well, I put it there.” He asked her what happened to the knife and she said, “I don’t remember. I was drunk.” During their relationship, Yvonne did tell Witness 7 that she had not been happy being married to Benny, but never said why Benny was killed.

On January 14, 2013, Detective Dewitt spoke to Witness 8 who lived in the Pioneer Village on Travis Drive in July of 1985. Witness 8 remembered the night of the murder because it was a night her sister from Colorado was visiting. Witness 8 was awakened by the commotion of the police radios. Back then she and her husband had identified the shovel found in the Scruggs’ trailer home on the night of the murder as belonging to them and last seen by her before the murder lying against her trailer by their front steps. In any event, Witness 8 told Detective Dewitt that about a week or so following the murder, Yvonne told her that she knew who had killed Benny. She and Yvonne were outside talking when Yvonne told her that. Witness 8 said to Yvonne, “Well why don’t you say something then?” Yvonne reiterated that she knows who did it, but that she cannot turn him in. Witness 8 asked Yvonne who it was, but Yvonne would not tell her, and did not explain why she could not tell her. Witness 7 had been interviewed by police on July 22, 1985, 5 days after Scruggs was murdered, so there was no mention of this information that day.

Prosecutors said that the investigation was considered “dormant” for 20 years before it picked up steam in 2012 — in no small part because of statements Maier allegedly made while he faced legal jeopardy in an unrelated matter.

“The investigation lay dormant until the accused brought the matter back to the attention of the police in March of 2012 and the investigation has proceeded apace since then,” the DOJ said.

At the time, Maier was facing prison time for stalking jurors who convicted him for threatening a judge. Prison records show that Maier was convicted of crimes in Wood County several times from 1994 to 2012 — including felony stalking and felony battery or threat to a judge.

“The resurrection of this cold case was initiated by the Defendant. During the last week in February and the first couple weeks of March, 2012, pleadings were filed, and hearings held regarding the Defendant’s upcoming jury trial in Wood County on ten counts of stalking jurors who had sat on his jury which, in 2006, had convicted him of two counts of threatening a judge. The Defendant knew he was looking at additional prison time,” the complaint said. “During the pendency of the stalking case, the Defendant contacted the Wisconsin Rapids Police Department and asked for a meeting with the police chief to discuss the 1985 Benny Scruggs murder case.”

Maier allegedly told investigators that Yvonne Scruggs tried to frame him for the killing:

The Defendant told the officers repeatedly that he believed Yvonne had killed Benny, but he also said she set it up so that it would look like he did it. Before Benny’s murder, Yvonne was constantly coming over and complaining about Benny to him; she told him she had “lost the fizz,” which the defendant took to mean she had lost her feelings for Benny. Three days before Benny died, Benny came by the Defendant and told the Defendant that Yvonne was “always bringing up your name.” Benny agreed with the defendant that she was just doing that to “piss” Benny off.

The Defendant said that Yvonne had had a thing for him in high school. When they worked together at the Woolco store, she would give him rides home and would stop on a dirt road to perform oral sex on him. He said that Yvonne told him, “I got her in trouble in high school” and that she was going to get him back. He said that what really got him was that his fingerprints were all over that bedroom and that his fingerprints would prove he did it and he would go down for murder. He explained that his fingerprints were all over because about a week before Benny’s murder, he got drunk. Yvonne telephoned him and wanted him to come over. They had sex on the living room floor and then moved to Yvonne and Benny’s bedroom and had sex on the waterbed.

Also in 2012, another witness came forward — this one a jail inmate — claiming Maier had bragged about the slaying behind bars. That person, identified as Witness 9, claimed that “Don [Maier] told me he killed my cousin’s dad. He told me what he did with the clothes and what he did with the knife.”

In a twist, that witness claimed that the more Maier talked about the killing the more the witness realized his cousin was the victim — leading Maier to go “white” as a ghost and walk back his bragging:

In 2017, a Witness 11 allegedly told an investigating detective that Maier called Yvonne Scruggs a “bitch” during a phone call with his mom. During the allegedly overheard prison call, Maier expressed that he was glad both Yvonne and Benny Scruggs were dead, according to the witness. Maier also allegedly said “I’m glad I killed that motherfucker,” namely Benny Scruggs, during the recorded prison phone call.

Maier is expected to appear in court on Friday afternoon.

[Image via Department of Corrections]