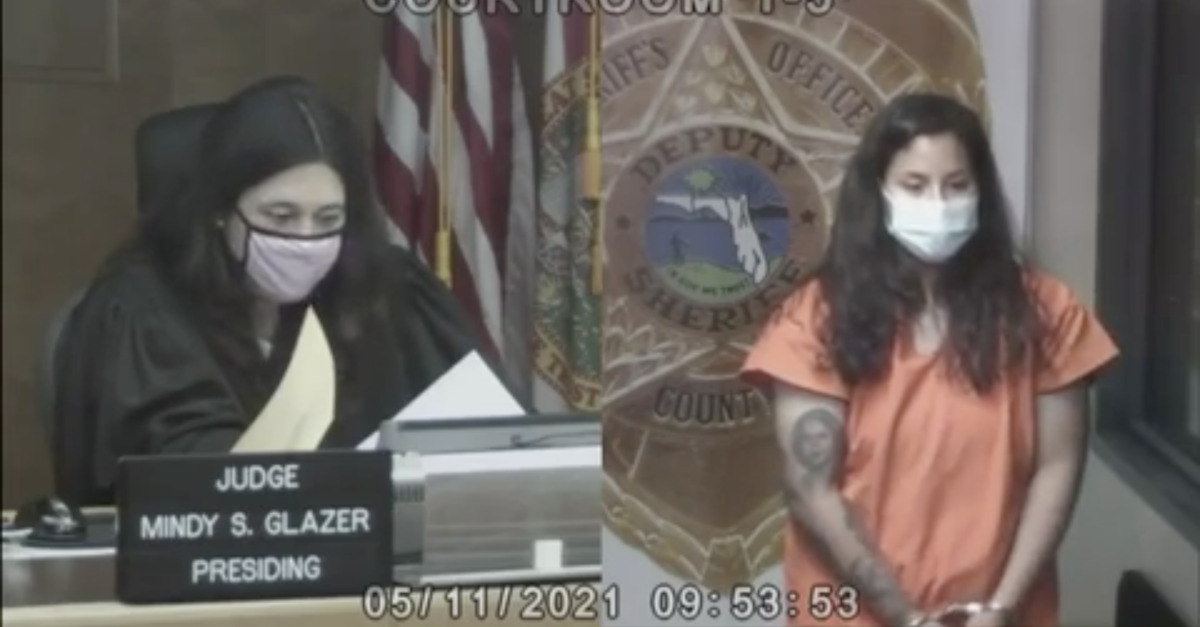 A Florida woman and former police officer was arrested on various charges after allegedly sneaking into a high school and attempting to infiltrate the student body in search of Instagram followers.

Audrey Nicole Francisquini, 28, was charged with burglary, interfering with a school function, and resisting arrest without violence after walking through the front entrance of American Senior High School in Hialeah, Fla. on Monday, according to police.

Authorities say she was initially able to adequately blend in with the student population for awhile due to her choice of camouflage: she apparently dressed similar to the students, wore a backpack and carried a skateboard in one hand while toting a painting in another.

Once inside, the defendant is alleged to have passed around analog (paper) fliers bearing her Instagram handle as she implored students to follow her online. She also recorded her efforts in real-time as she roamed the halls of the high school, according to The Miami-Herald.

According to Miami-based ABC affiliate WPLG, the apparently pretend-student’s efforts were eventually caught onto by school security officers who confronted her two times before she finally left.

The first time, Francisquini allegedly told a security guard she was a new student who was looking for the registration office. After receiving directions to that office, however, she allegedly breezed past the door and began harassing a group of students with fliers and follow-asks, preventing them from entering a classroom.

After that, school security confronted Francisquini a second time–but this time she is alleged to have simply ignored them.

She was then branded a “potential threat.”

Francisquini is alleged to have continued her efforts to gain followers and record the drama as it happened for awhile–until she was more or less surrounded by school officials. At this point, she reportedly made her way to an exit that opened out into the faculty parking lot. Police say they tried to yell at Francisquini and stop her as she left. She allegedly ignored those entreaties and left the campus entirely.

After reviewing security footage, police came to the conclusion that the woman’s follow-gaining exercise was pre-planned.

The would-be influencer was quickly ascertained later that same day by local authorities after matching her Instagram information with her driver’s license. She was arrested without incident and was originally held on $2,000 bail.

“I legit have I don’t know how many cops outside right now of my house,” Francisquini said in her final Instagram story before she was taken into custody. “I’m not going outside at all.”

She did go outside, of course, and was arraigned Tuesday.

“It says here she’s trying to get people to follow her on Instagram,” Miami-Dade Circuit Judge Mindy S. Glazer said in court on Tuesday morning. “First of all, I don’t know how you get into the school. They have a guard at the front. You have to show your ID.”

“She was carrying a skateboard, a painting, dressed similar to students to try and blend in with — as soon as you shake your head right now,” a prosecutor said during the arraignment as Francisquini vigorously nodded, according to local Fox affiliate WSVN.

“Turning Ls into Dubs,” a post from Wednesday morning on Francisquini’s Instagram reads–underneath an image of her smiling mugshot and a news story about her exploits. Various emojis connoting pride and tears of laughter followed as did the following hashtags: “#Fthesystem #Wemadeit #Missionaccomplished #thanksforthesupport.”