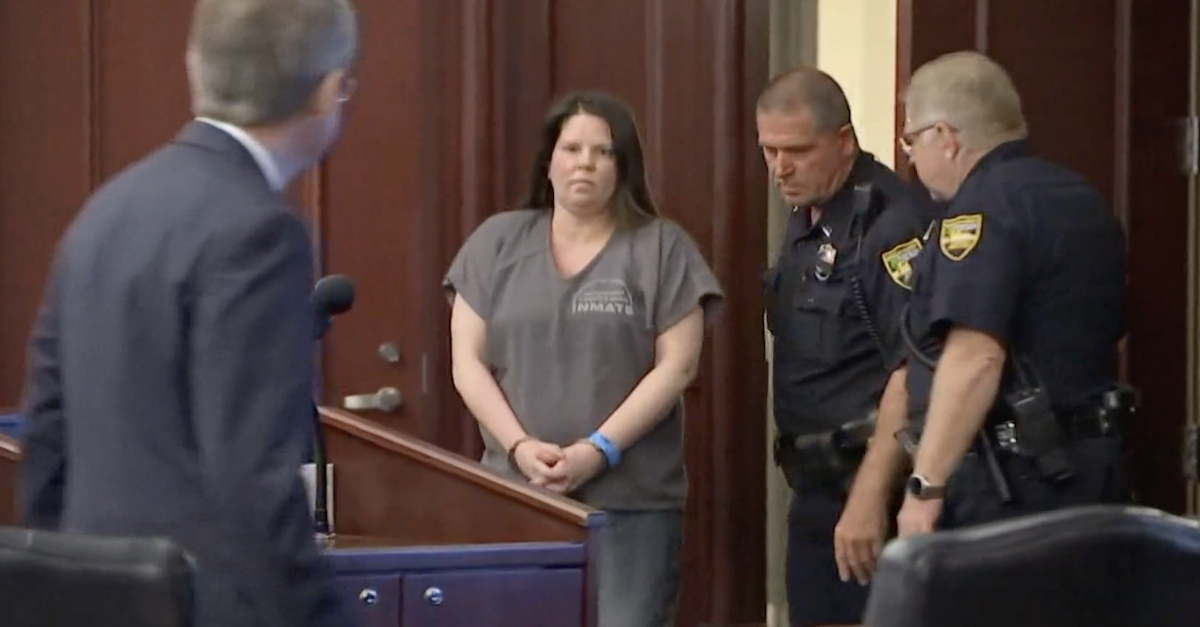 Amy Lewis Oliver appearing in court for her sentencing hearing on Friday.

A 48-year-old mother in Florida will spend the next four decades of her life behind bars for killing her 3-year-old son by forcing the little boy to overdose on prescription sedatives. Duval County Circuit Court Judge Mark Borello handed down a sentence of 40 years in prison to Amy Lewis Oliver for the 2020 murder of Henry Prisby, court records reviewed by Law&Crime show.

Oliver in July reached a deal with prosecutors in the State Attorney’s Office for the Florida’s Fourth Judicial District in which she agreed to plead guilty to one count each of second-degree murder and aggravated assault on an emergency medical care worker. In exchange for pleading guilty, prosecutors reduced the murder charge from first to second-degree and dropped one count of aggravated child abuse and aggravated manslaughter of a child. The parties also agreed to the 40-year prison sentence with 546 days credited for time served.

Henry’s father, Chris Prisby, held two of his son’s favorite stuffed animals as he read an emotional victim impact statement during Friday’s proceeding, according to a report from Jacksonville CW affiliate WJXT. He addressed the court from Henry’s perspective, speaking on behalf of his deceased son.

“Every day my daddy goes to sleep and wakes up without me. I can imagine that feels like getting hit with a two-by-four,” Chris Prisby reportedly said. “My dad will never hear my voice again. Put yourself in my daddy’s shoes year after year.”

Prisby reportedly refused to say Oliver’s name, referring to her only as “the evil person,” and referring to her family members in attendance as “Team Evil,” according to the Florida Times-Union.

“Anyone associated with the evil person is dead to me and my dad forever. The only time my daddy ever wants to hear from you is when you send a message to my dad that the evil person is dying or dead,” Prisby continued. “Before and after my death and even in the aftermath, I will always remember you enabled the coward who killed me, a sleeping 3-year-old boy. You must be so proud. My daddy did more for me than any of you ever did combined.”

According to prosecutors, officers with the Jacksonville Beach Police Department on the afternoon of Oct. 27, 2020 responded to a 911 call regarding an unresponsive 3-year-old child. The caller, later identified as Prisby, told the emergency dispatcher that his son was not breathing and that Oliver “tried to kill” the boy.

Oliver, who shared custody of Henry with Prisby, was picking up the boy at Prisby’s home and asked if she could take a nap with her son before the two drove back to her house, an arrest affidavit states. Prisby agreed and let her and Henry lay down in his bedroom, but after approximately three hours, he became suspicious. He tried to get into the bedroom, but the door was locked. He then received an ominous text message from Oliver.

“Hindsight being what it is, if I’d known the extent you’d go to to make me pay for not staying w/ you, I’d have had that abortion…and, you should know that I was so concerned/fearful about being a single mom again, when he was born not breathing, a big part of me hoped they wouldn’t be able to revive him—you’ve made my life so miserable in just 4.5 years and frankly, I don’t have the strength for 14 more. I gave you an amazing gift and have suffered significantly for it. You brought this on yourself, your ‘devout catholic’ parents helped, and considering that ya’ll are the type of people who have to experience things for yourselves in order to fully grasp the gravity of another human being’s perspective, I’m gifting you all your own mental health disorder. I’m sure you’ve learned the lesson now, but jic: it’s NEVER a good idea to take so much from a person, they lose all hope for their future, AND it’s not up to YOU what THEIR idea of a happy life is.”

That’s when Prisby forced the door open and saw “a large amount of blood on the bed” and his son unconscious nearby and called 911.

Upon arriving at the scene, members of the Jacksonville Fire and Rescue Department found the boy unconscious and not breathing in the home’s main bedroom. He was rushed to a local hospital where he was pronounced dead.

“Meanwhile, Oliver had locked herself in the bathroom attached to the bedroom and refused to exit,” prosecutors wrote in a press release. “The door was broken down and Oliver, covered in blood, attacked first responders with a syringe, causing them to back down and wait for law enforcement.”

Oliver had cut her wrist, neck, and leg with a razor in an attempt to take her own life, court documents say.

The Medical Examiner ruled Henry’s death a homicide caused by “drug toxicity.” Oliver had reportedly injected the child with a lethal level of prescription sedative.

Before ending the proceedings, Judge Borello addressed the court, reportedly saying there was “no explaining this unexplainable act.”

“I believe it speaks volumes to the impact that Henry had in his short time on this earth on so many people, and perhaps that was his purpose,” Borello reportedly said.

Read the arrest affidavit and sentencing agreement below.