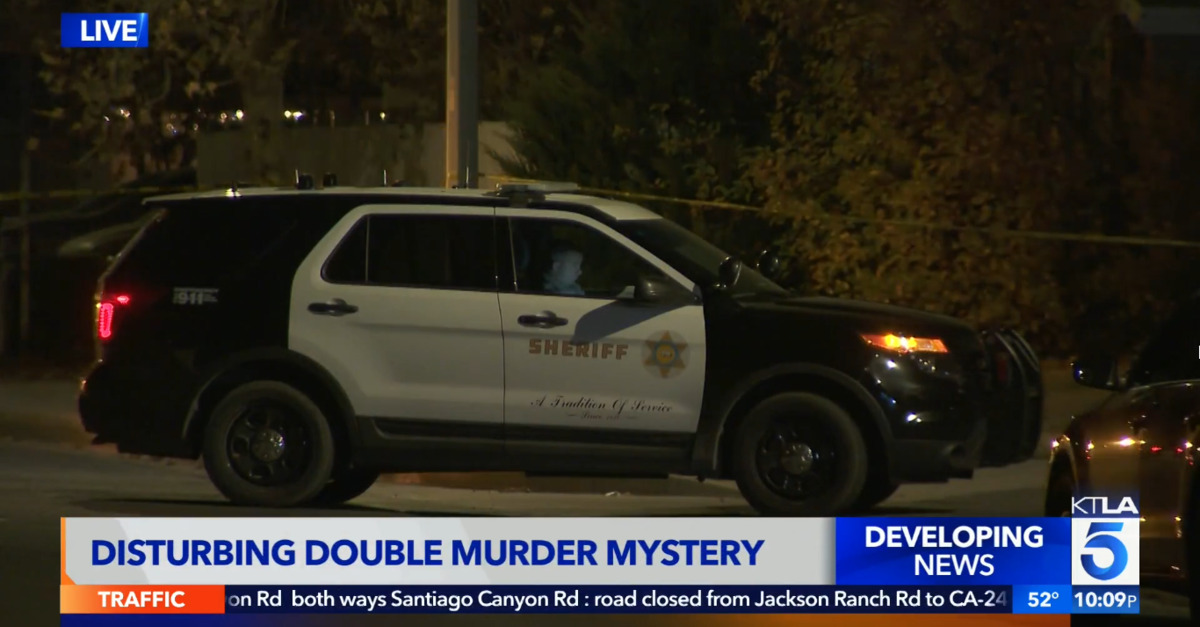 A personal trainer in Southern California was arrested after two of his children were found decapitated in their home on Friday.

According to the Los Angeles Times, the bodies of a 12-year-old boy and 13-year-old girl were both discovered in separate bedrooms at a house in Lancaster, California, a small city in L.A. County.

“The social fabric of the country and the world has been shredded, and we are starting to see the aftermath,” he added. “What I’m seeing is more and more people feeling desperate, and that can only have one result.”

Two other children were removed from the house without any apparent injuries.

The grisly scene was uncovered after the L.A. County County Fire Department responded to a call about a possible gas leak mid-morning on Friday. Firefighters were the first to discover the bodies.

Details of the killings slowly trickled out through official sources.

The L.A. Sheriff’s Department first released a statement confirming the apparent homicides using less-than-descriptive terms by describing the children as having “lacerations and stab wounds.”

That full news release is as follows:

Los Angeles County Sheriff’s Department Homicide detectives are continuing their investigation into the death of a female black and a male black possibly in their teenage years on the 45000 block of Century Circle, Lancaster on Friday, December 4, 2020 at approximately 7:50 A.M.

Detectives have learned that the deceased male and female both appeared to be suffering from lacerations and stab wounds.

At the location there was also one male and one female adult, along with two other children who are currently being questioned by Homicide Investigators.

The relationship between the decedents and the four persons at the location is unknown at this time pending interviews with Homicide Investigators.

The investigation is ongoing and there is no additional information at this time.

“It doesn’t seem to be that the cause of death from the two people inside have anything to do with a gas leak,” L.A. Sheriff’s Department Lieutenant Brandon Dean later told reporters outside of the home.

Dean went on to explain that the two children appeared to have died due to “some type of a sharp trauma” from “either a stabbing or slicing device.”

It is currently unclear when the children were killed or just how long their bodies were left before they were discovered. But one neighbor suggested that the pair’s dead bodies had been there for some time.

The neighbor said a putrid smell had been emanating from the house for several days and that he recently heard screams from inside the residence as well.

“It’s been going through my head,” he told local CW affiliate KTLA. “Is there something I could have done? Should I maybe have reported it earlier?”

Attorney Howard Kern, a longtime client of the accused, was one of multiple people who phoned authorities with concerns about the Taylor household. Specifically, Kern was the one who called about the gas leak because he feared for the family’s safety after not hearing back all week.

“Think of the nicest person that you know, then multiply that by five,” Kern told the L.A. Times. “He worked so hard to support himself. Unfortunately, we don’t know enough to say what happened or what didn’t happen.”

Kern did note, however, that he felt Taylor lived a somewhat hectored existence due to the “contentious” relationship he apparently had with his wife.