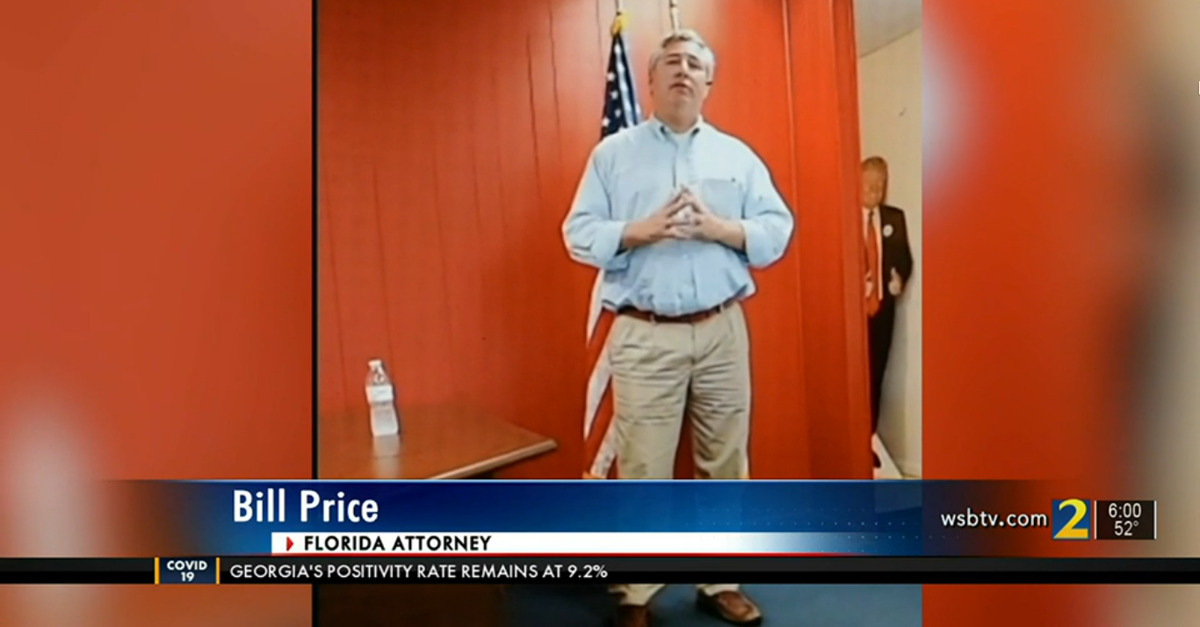 The Florida Bar Association is investigating a conservative attorney who allegedly encouraged other Republicans to break the law by registering to vote in Georgia’s instrumental Senate runoff elections.

According to local ABC affiliate WSB-TV, where reporter Nicole Carr originally broke the story, Price is now subject to the internal discipline of the Sunshine State’s attorney-licensing organization over his proposal and efforts to allegedly game the system.

On Friday morning, the Florida Bar Association confirmed to Carr that they’d opened a file into the allegations against Price. The open file is investigated at a staff level to determine whether the attorney violated Florida Bar rules. Open files can lead to active investigations or monitoring of the event in the probe.

Panama City, Florida-based lawyer Bill Price made waves earlier this week after state and local officials in Georgia announced that he was being investigated for felony voter fraud after attempting to register to vote in the Peach State following a public appearance in which he outlined ways for others to do the same.

A since-deleted Facebook Live video contains the evidence on which those three separate investigations are based.

In the footage, Price can be seen speaking to the Bay County GOP in Florida on Nov. 7. After bemoaning Joe Biden‘s apparent win, the Florida Republican attorney explains that he plans on briefly moving to his brother’s home in Georgia so he can register to vote for incumbent Republican Senators Kelly Loeffler and David Perdue, who are currently locked in a razor-tight campaign with Democrats Rev. Raphael Warnock and Jon Ossoff, respectively.

The attorney responded to the news by claiming that he was just joking about the whole thing. Various officials in Georgia, however, took what he said seriously–and said they planned to block his pending voter registration application because they believe he is “clearly…not” eligible to vote in the state.

Notably, Price’s alleged–and apparently foiled–plan was in direct contravention of recent statements made by state officials warning people against engaging in voter tourism.

“Make no mistake, individuals who attempt to undermine the integrity of Georgia’s elections will be investigated and prosecuted to the fullest extent of the law,” Georgia Secretary of State Brad Raffensperger said in late November.

“Those who move to Georgia just to vote in the Senate runoffs with no intention of staying are committing a felony that is punishable with jail-time and hefty fines,” he continued. “They will be found, they will be investigated, and they will be punished.”