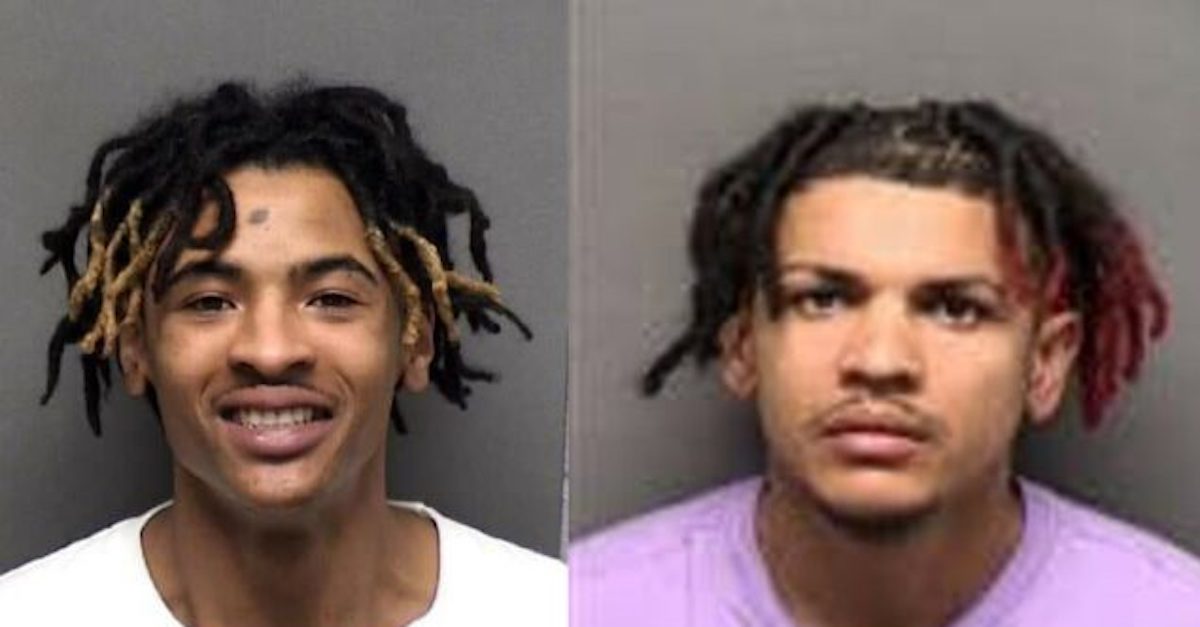 An expectant father in Texas was arrested this week after police say he shot a man multiple times at a baby shower thrown in anticipation of his child’s birth.

Elijah Anderson Jackson, 24, was taken into custody Monday and charged with one count of aggravated assault with a deadly weapon, court documents reviewed by Law&Crime show.

Jackson was wearing a shirt that said “One Lucky Daddy” at the time of his arrest, San Antonio CBS affiliate KENS reported, citing investigators.

According to a press release from the Bexar County Sheriff’s Office, deputies on March 12, 2022 at approximately 9 p.m. responded to multiple calls about a shooting at a home located in the 10300 block of Floore Hollow in West Bexar County. Upon arriving at the scene, first responders allegedly spoke to witnesses who said that a 23-year-old male had been shot several times by another partygoer.

Investigators said that the shooting occurred after Jackson and the victim, later identified as Jerone Conyers, allegedly got into a heated argument at the residence, which was also hosting a baby shower for Jackson’s unborn child. Jackson allegedly shot Conyers four times in front of multiple witnesses before allegedly fleeing the scene with his brother, 29-year-old Johnas Laquann Brewster.

Conyers was transported to a local hospital by other party attendees before first responders arrived. He was treated for non-life-threatening injuries, police said.

Police quickly located the vehicle in which the two suspects allegedly fled the scene of the shooting. The car was parked at a residence located in the 5000 block of Misty Glen Lane in East Bexar County. Deputies with the BCSO Gang Unit, Street Crimes Unit, and K9 Unit responded to the location with aerial assistance being provided by the Texas Department of Public Safety (DPS).

Police said Jackson then exited the residence through the rear window and climbed onto the roof of the residence as Brewster fled. Once on the roof, Jackson allegedly attempted to give Brewster “commands,” but then immediately surrendered and was taken into custody on the front lawn of the home. Investigators allegedly found Brewster hiding behind a nearby storage shed and arrested him without incident. Deputies also recovered the firearms and marijuana Brewster allegedly threw over the fence.

BCSO Spokesperson Johnny Garcia told KENS that the arrests presented a particularly challenging situation because of the lack of visibility at night.

“It’s a dark, unlit situation and you really don’t know what’s going on,” he reportedly told the station. “It’s difficult and it rattles your nerves and it makes you uneasy because you know danger is on the other side.”

Garcia credited the DPS aerial support for allowing the raid to wrap up without incident or injury.

“DPS was able to see the suspect was exiting the home and trying to discard evidence that may have been involved in the shooting we’re investigating,” Garcia reportedly said, adding,”A high powered weapon is what the suspect was throwing over the fence into the backyard of an innocent person.”

Both men were booked at the Bexar County Jail. Brewster was charged with one count of being a felon in possession of a firearm, a third-degree felony, per court records. He was released Monday after posting bond of $25,000.

While Conyers sustained four gunshot wounds, police reportedly said that a total of 16 shots were fired during the incident, all by the same firearm. According to KENS, one of the stray bullets went into a nearby home and hit the headboard of a small child’s bed. Luckily, the little boy was away for the evening.

Jackson remained in detention on $75,000 bond as of Tuesday morning.