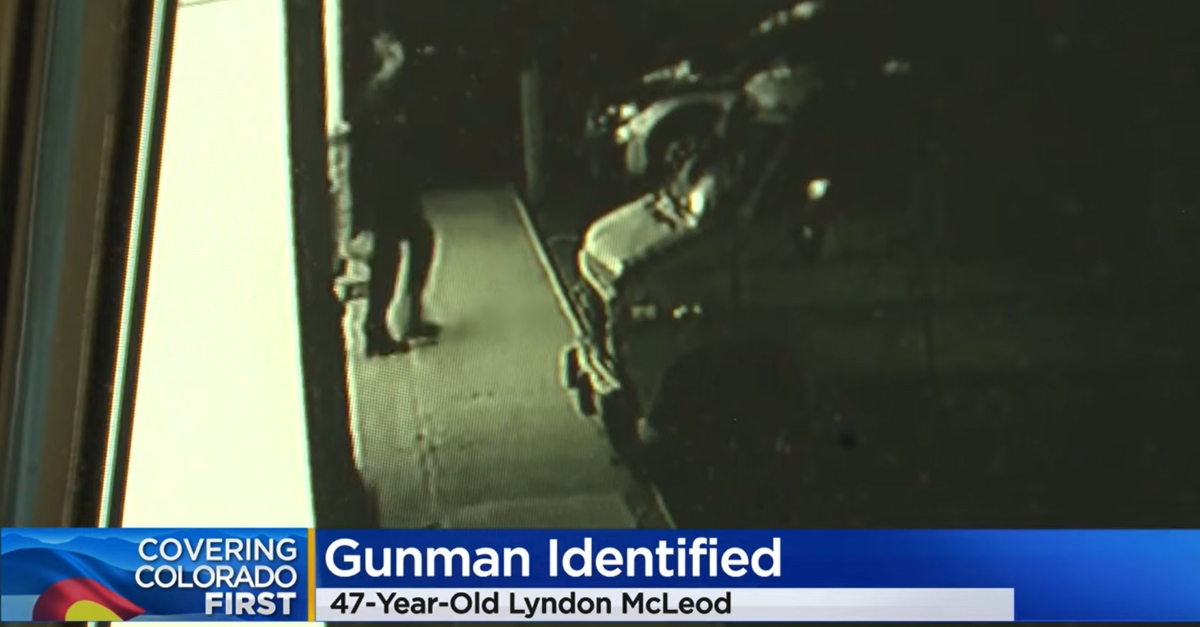 Surveillance footage screenshot of man identified as Lyndon James McLeod. This is at the Lucky 13 tattoo parlor. Police say he killed Danny Scofield there.

The deceased suspect in a recent Colorado shooting spree wrote and self-published novels, at least one of which featured a fictional murder with disturbing parallels to one of the real-life killings.

Lyndon James McLeod, 47–under the pseudonym “Roman McClay”–wrote books about a character named “Lyndon MacLeod,” according to The Denver Post. One of these books featured a scene in which the character went to an apartment complex on the 1300 block of Williams Street, wore police gear, and killed people while armed with a rifle. The victims in this–for lack of a better term–fictional account reportedly included real Denverites. Details from one of the attacks in Monday’s shooting spree closely mirrors this story–including the tactical gear, the street, and obviously, the character’s name– though only one man is said to have died in that encounter.

Police have said that McLeod was the person who opened fire in several locations on Monday afternoon across the cities of Denver and Lakewood, killing five people, and injuring two. Yet the final person he shot–a Lakewood police officer–managed to fire back despite her fresh injury to the abdomen. McLeod died. The officer is in stable condition, and has had surgery but needs more, cops said in an update Tuesday afternoon.

The motive for the shooting spree remains under investigation, though cops have said that it appeared McLeod was targeting people, at least in Denver.

Going in chronological order, Police Chief Paul Pazen said McLeod killed two women and injured a man a little after 5:00 p.m. at First Avenue and Broadway. Local cops did not officially identify the victims in the Denver shootings, but loved ones have named the women as Alicia Cardenas, 44, and Alyssa Gunn-Maldonado, 35. Alyssa’s husband Jimmy Maldonado is the man who survived. A GoFundMe to support him raised $140,398 of a $150,000 goal as of Wednesday afternoon.

The Denver boutique store The Sol Shine mourned both women in a Facebook post on Tuesday, saying Maldonado taught yoga there back when the business was a yoga studio.

“We are proud and grateful to have known these beautiful humans and send love as they are welcomed to meet with our ancestors,” they said. “Today may we all come together and take one last breathe for them. Send them love, guidance, and peace. Knowing that they helped spread love and light during their time here.”

Alicia Cardenas was owner of the Sol Tribe tattoo parlor in Denver. Her bio on the company site described her as a long-time body art expert.

“Alicia Cardenas is a true Denver Native—a proud Indigenous artist born and raised in the city who’s been working in the Denver body modification industry for nearly her entire life,” the bio said. “She began working and apprenticing at Bound By Design in 1994 at the age of 16 and began piercing there professionally a year later. In 1997, she opened her first shop, Twisted Sol—Denver’s first custom tattoo and professional body piercing studio. She began her journey as a tattooer—in addition to her already extensive knowledge of body modification—in 2008, and in 2009, after twelve glorious years at Twisted Sol’s Cap Hill location, she and longtime shop manager Kevin Strawbridge moved down to Broadway to open Sol Tribe.”

“We’re hurting badly,” the business said, addressing customers about pending appointments on Tuesday. “We feel your love through our sadness. Please be patient with us as we navigate.”

💔Denver, so many of you have asked me how you can help the families of the victims of this week’s horrific shooting. Here’s 1 way:

For the family of Alicia Cardenas: https://t.co/7g8jkpE3lz

McLeod committed another shooting in Denver at 12th Avenue and Williams Street, killing a man, the chief has said. This was reportedly at the high-rise apartment building One Cheesman Place. The suspect was dressed in tactical gear, wearing a police logo and badge on entering, a building manager wrote to residents in an email, according to the Post. This is the incident that resembles one of McLeod’s books.

These stories were actually well-received by most online reviewers who left comments on GoodReads and Amazon before Monday’s shooting spree, but a reviewer criticized one of the releases as “an angry alt-right wolf wrapped in science fiction wool.”

I don’t strongly identify with democrats or republicans on a lot of things and I enjoy a strong critique of both. But this book is packed full of rants on diversity, women, and globalization. There are fantasies of killing people involved in the BLM movement, and bizarre threats to Ben Shapiro/Sam Harris/and others. While others may be guilty of ignoring the necessity of violence in some extreme situations, this book fetishizes violence as the great equalizer.

The only “real men” to the author are men who live in the woods, have skull tattoos, and hunt bears. Anything other than this results in “weak men”. One of the greatest ironies of the book is the supposed pull-yourself-up-by-your-bootstraps alpha author whines that the world doesn’t mold itself to his desires.

A positive review dated Oct. 18, 2020 about another book reads darkly ironic in retrospect [emphasis ours]:

Two things to always keep in mind when reading this novel: (i) the author and the characters are distinct; do not confuse one for the other, and (ii) “the line separating good and evil passes not through states, nor between classes, nor between political parties either – but right through every human heart…even within hearts overwhelmed by evil, one small bridgehead of good is retained. And even in the best of all hearts, there remains…an uprooted small corner of evil.” (A. Solzhenitsyn)

Police have said that McLeod made his way into Lakewood, killing Danny Scofield, 38, at the Lucky 13 tattoo parlor. (Between this and Sol Tribe, it’s worth mentioning that McLeod was reportedly the owner of the now-defunct Flat Black Ink Corp.)

“He was my best friend,” Scofield’s sister April Potter said, choking back tears in an interview with KDVR. “The best person I’ve ever met in my life. I don’t know who I’m going to turn to, because he’s the person I turned to for everything.”

A small memorial for Sarah Steck is slowly growing outside the Hyatt House. This man took a pause here. He didn’t know Sarah, but lives nearby. pic.twitter.com/xUq7Q3oZMo

“Colleagues and guests knew Sarah for her infectious laugh and her love of kittens, art and music–especially Blink-182,” the hotel said in a statement. “But most of all, Sarah loved her boyfriend, family and friends. We will miss her terribly, and our hearts go out to Sarah’s family and friends as well as the families and friends of all the victims of the horrific acts of violence that occurred on December 27, 2021.”

Hyatt House at Belmar will suspend operations out of respect for shooting spree victim, Sarah Steck.