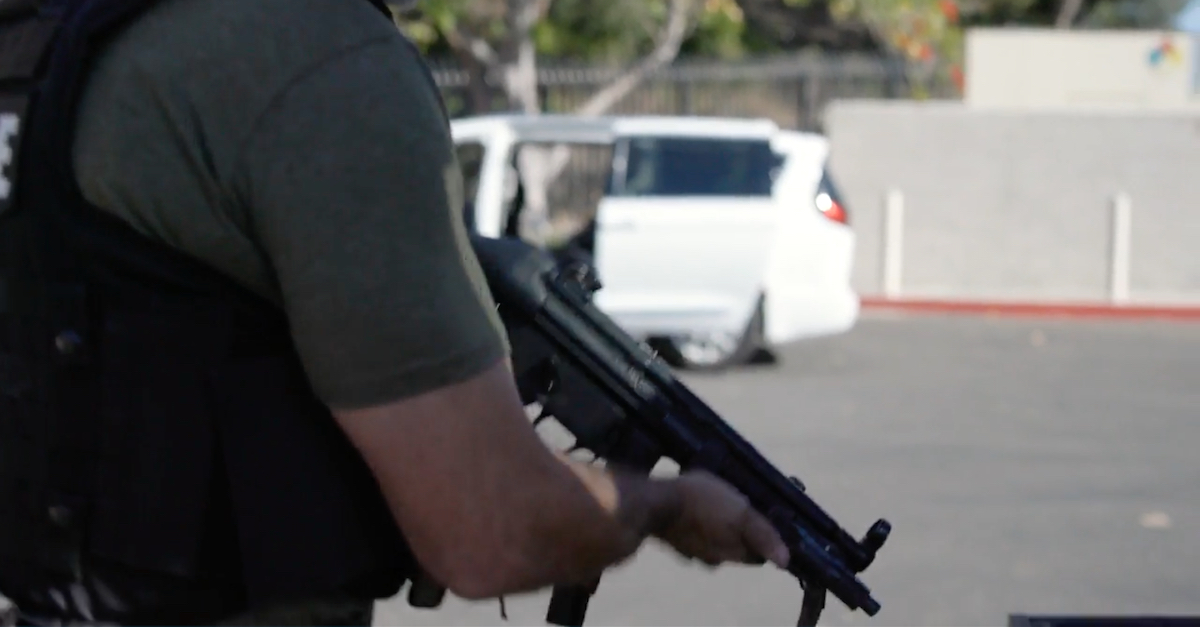 Image via HBO’s “Crime of the Century.”

Two defendants pleaded guilty on Friday in a federal courtroom in California to playing a role in a fentanyl overdose death that was featured in an HBO documentary.

Cole Thomas Salazar pleaded guilty to possessing fentanyl with the intent to distribute — a crime which carries a maximum sentence of 20 years in prison, the U.S. Attorney’s Office for the Southern District of California announced Friday. Co-defendant Valerie Lynn Addison pleaded guilty to possession with the intent to distribute fentanyl and methamphetamine — a crime which also carried a possible punishment of 20 years in prison.

The DOJ said that Salazar admitted he “supplied a fatal dose of fentanyl that resulted in the death of a 24-year-old woman who was found inside her Vista apartment on November 3, 2020.”

“According to his plea agreement, Salazar used an online classified ads service to offer controlled substances for sale,” the DOJ continued. “After communicating online with the victim — identified in court documents by the initials S.E.F. — Salazar sold fentanyl to S.E.F. on November 2, 2020, and she subsequently died from ingesting the fentanyl.”

Salazar was arrested on Jan. 10, 2021. He was found in possession of “packages of heroin and fentanyl when he was taken into custody,” the DOJ continued. “A search of his nearby hotel room located numerous quantities of controlled substances including more fentanyl and dealer-related paraphernalia such as scales, baggies, and pay and owe sheets.”

The investigation and the arrests were portrayed on the HBO documentary “The Crime of the Century,” the DOJ noted.

HBO described the two-part film as a “searing indictment of Big Pharma and the political operatives and government regulations that enable over-production, reckless distribution, and mass abuse of synthetic opiates.”

An affidavit attached to the original criminal complaint described the scene that led to the arrests of Salazar and Addison:

In the apartment, SDSD Deputies found an assortment of prescribed medications, numerous alcohol containers, a bong, burnt foil, and two small clear plastic baggies with nothing inside of them. The burt foil and a baggie presumptively tested positive for the presence of fentanyl. The San Diego County Medical Examiner’s Office (MEO) conducted their own investigation and performed an autopsy on November 8, 2020. The MEO determined S.E.F. died as the result of the toxic effects of fentanyl and alprazolam.

Cell phone records and messages containing thinly veiled drug lingo connected the decedent to the two defendants, the affidavit states.  An undercover agent used the decedent’s cell phone to communicate with Salazar under the guise of needing more drugs.  A clandestine purchase was established; Salazar was caught in the snare.  Addison was with him when agents moved in to make their arrests.

The affidavit goes on to say that Addison did plenty of talking:

During a post-Miranda interview, ADDISON admitted she was renting the room at the hotel in her name because SALAZAR had an active felony warrant. ADDISON said SALAZAR was going to sell the drugs he was in possession of to a female friend. ADDISON said SALAZAR was supposed to give her the money from the drug sales, and she was going to deposit the money into her bank account and use the money to continue renting the hotel room.

During a post-Miranda interview with SALAZAR, SALAZAR said the drugs in the hotel room belonged to him. SALAZAR said ADDISON was renting the room, and they were both staying in the room. SALAZAR stated he had been using the purple Samsung Galaxy S9+ cell phone found in his possession for weeks. SALAZAR said he was walking to sell drugs to his friend when he was contacted and arrested by police. In regards to the investigation of the death of S.E.F.  SALAZAR denied selling S.E.F. fentanyl.

“We speak often about how counterfeit pills that contain fentanyl endanger our community members,” U.S. Attorney Randy Grossman said in a press release. “We can’t lose sight of the fact that powdered fentanyl – which caused the death in this case – is extremely dangerous. To those drug dealers who would sell fentanyl in all its forms: Know that federal law enforcement will hold you accountable for any deaths that your sales cause.”

“Our mission is to hold dealers accountable and to save lives,” said DEA Special Agent in Charge Shelly S. Howe. “In this case, that mission was accomplished by arresting Salazar and seizing additional fentanyl that could have killed others.”

A sentencing hearing is scheduled for Sept. 16.

The original criminal complaint, an FBI affidavit, and an indictment are below.  The plea agreement forms themselves are not yet available on federal court databases.

[Image via screengrab from HBO’s “Crime of the Century.”]