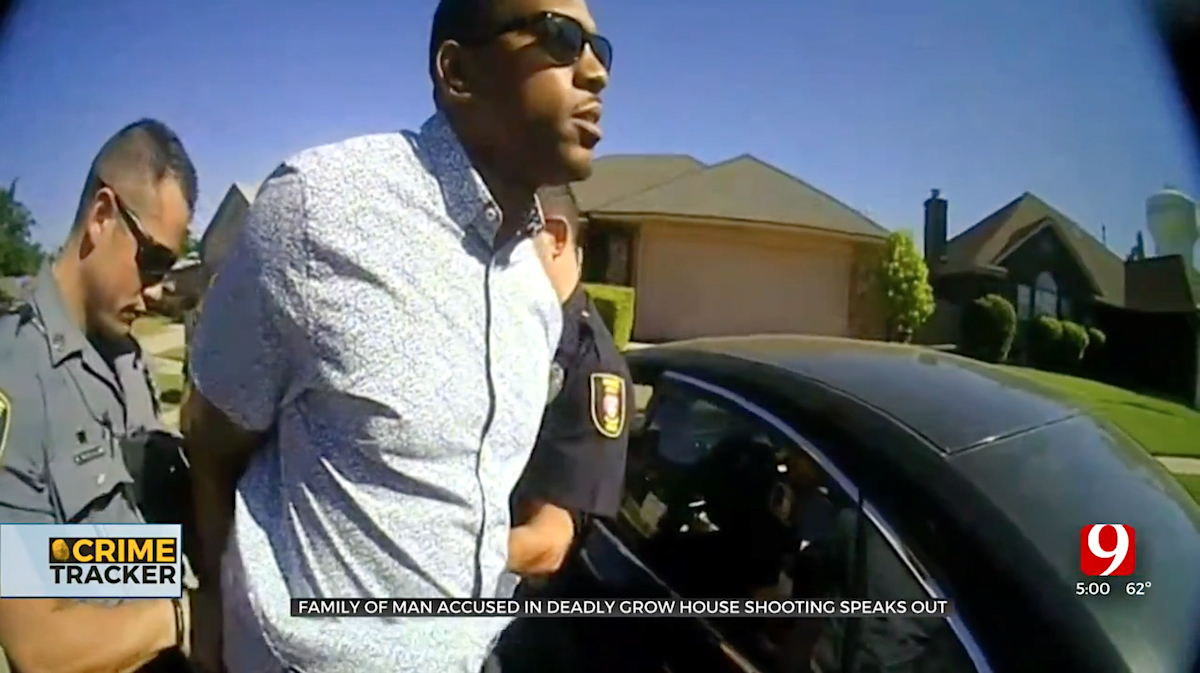 The family of an Oklahoma Army veteran LaRue Bratcher, 34, is increasingly speaking out against the Bratcher’s upcoming trial on a list of charges connected to the shooting and killing of a man who was allegedly trying to break into Bratcher’s business.

Bratcher, who is Black, is charged with pulling the trigger and killing Daniel Hardwick, 42, who is white. According to Yahoo! News, video shows that on May 27, 2020, Hardwick parked his car at the rear of Bratcher’s business around 1:00 a.m. and “jostle[d] with the door handle, attempting to gain entry.” Bratcher’s business grew medical marijuana, and May 27 was the second night in a row that Hardwick had shown up, the report said.

Oklahoma City CBS affiliate KWTV reported that the defendant himself called the police after the shooting.

“[Hardwick] was trying to break in when the business owner, who was inside the business at the time, apparently opened fire with a handgun, striking and killing the man who was breaking in,” Oklahoma City Police Department Master Sgt. Gary Knight told NBC affiliate KFOR.

Bratcher’s business license had lapsed. His wife told Yahoo! News that officials ordered him to make “nearly $100,000 worth of renovations” to his medical marijuana facility — so he wasn’t able to obtain the necessary paperwork to continue operations. That lapse would prove to be fateful.

“It was about 480 plants, which comes out to approximately $1,500,000 of marijuana,” Knight told KFOR. “Ultimately, he ended up being booked in to the Oklahoma County Jail on unlawful cultivation of marijuana.”

The charge is a felony.

Under Oklahoma law, first-degree murder includes any act which results in “the death of a human being” during the “unlawful distributing or dispensing of controlled dangerous substances or synthetic controlled substances” — “regardless of malice.”

Bratcher’s family is displeased with the prosecutor’s choice to pursue those charges.

“Someone broke into his place,” said Derrick Neighbors, Bratcher’s uncle, according to Yahoo! News. “He didn’t go out looking for trouble. He was in his own place of business.”

Vicky Bratcher, the defendant’s wife, held similar views. She said she believes that if her husband was white he would not be facing charges.

“I feel like this was an injustice for the simple fact that if the roles were reversed, if this was a white person inside the facility, he would not be in this situation,” she told Yahoo! News.\

Bratcher is a father of five.

Though Oklahoma is a so-called “stand your ground” state, the protection of the law does not extend to individuals engaged in a felony when they pulled the trigger in apparent self defense.

The law says “an owner, manager, or employee of a business” is “presumed to have held a reasonable fear of imminent peril of death or great bodily harm” if “[t]he person against whom the defensive force was used was in the process of unlawfully and forcefully entering, or had unlawfully and forcibly entered, a . . . place of business.”  It also provides protection if the person who pulled the trigger “knew or had reason to believe that an unlawful and forcible entry or unlawful and forcible act was occurring.” The first protection focuses on the person doing the entering; the second protection focuses on the person doing the shooting.

Other protections are also laid out in the statute.

“Prosecutors say that because Bratcher operated his grow business without a license, he was felonious and any self-defense clause is thrown out,” Yahoo! News explained.

Vicky Bratcher said prosecutors argued that her husband — the defendant — was a “threat to the community” because of his Army combat training.

“They used our experience of being a veteran [against us],” she told Yahoo! News while noting that she, too, had military experience. “That’s literally a slap in the face.”

Rallies and petitions in Bratcher’s favor have been held and circulated.

The prosecutor’s office did not respond to requests by Yahoo! News for comment.

The Oklahoma Medical Marijuana Authority “updated its policy this year to allow cardholders to apply for a new license while still using their expired one until the new one comes in the mail,” Yahoo! News noted.

[via screengrab from KWTV]