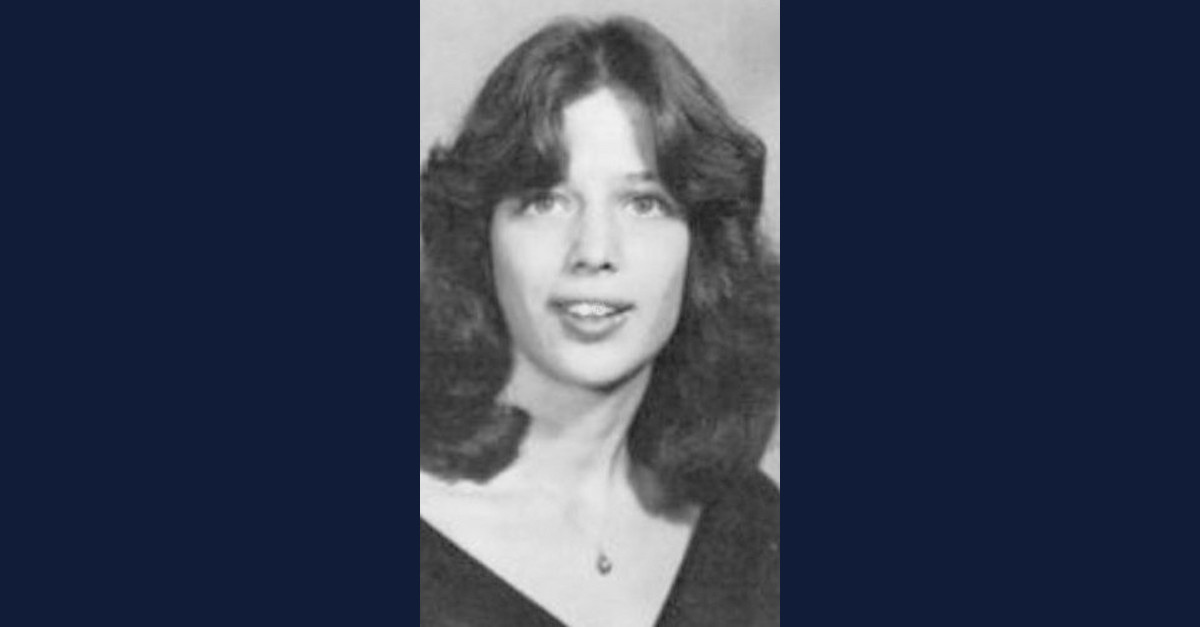 Authorities north of Philadelphia have identified human remains they say were found “unclothed,” “wrapped in a plastic tarp,” and buried in a shallow grave behind a 24-hour diner in 1995.

DNA testing revealed that the victim was Merrybeth Hodgkinson, the Bensalem Police Department announced Tuesday. Hodgkinson’s skeletal remains turned up on Sept. 18, 1995, in a wooded area behind the Club House Diner on Street Road, the police department said in a press release.

Hodgkinson had disappeared two years before the long-anonymous remains were uncovered. The police department said she was visiting family in Warminster, Pa., about 30 minutes west of the diner in September 1992 before she vanished.  That is when she was last seen alive.

An initial autopsy suggested that the then-unknown victim was between 35 and 45 years old, had given birth at least once, had brown hair, and stood between 4’8″ and 5’2″ tall.

The Bucks County Courier Times noted that Hodgkinson actually had two children and that her cause of death was possibly — through not conclusively — strangulation.

“The death was classified as a homicide by unspecified means and it was estimated that the body had been there for two to three years,” the police wrote on Tuesday while referencing the original case file.

Clothing found near the body includes a “blue quilted sleeveless vest,” a “pink t-shirt” bearing the verbiage “KPMG Peat Marwick” (a previous corporate name for the since-truncated accounting firm KPMG), and a white t-shirt which read “Property of Alcatraz Penitentiary Swim Team, San Francisco.” Authorities said the clothing might possibly have been associated with the victim.

Philadelphia NBC affiliate WCAU reported that children found the victim’s body while playing in the woods. 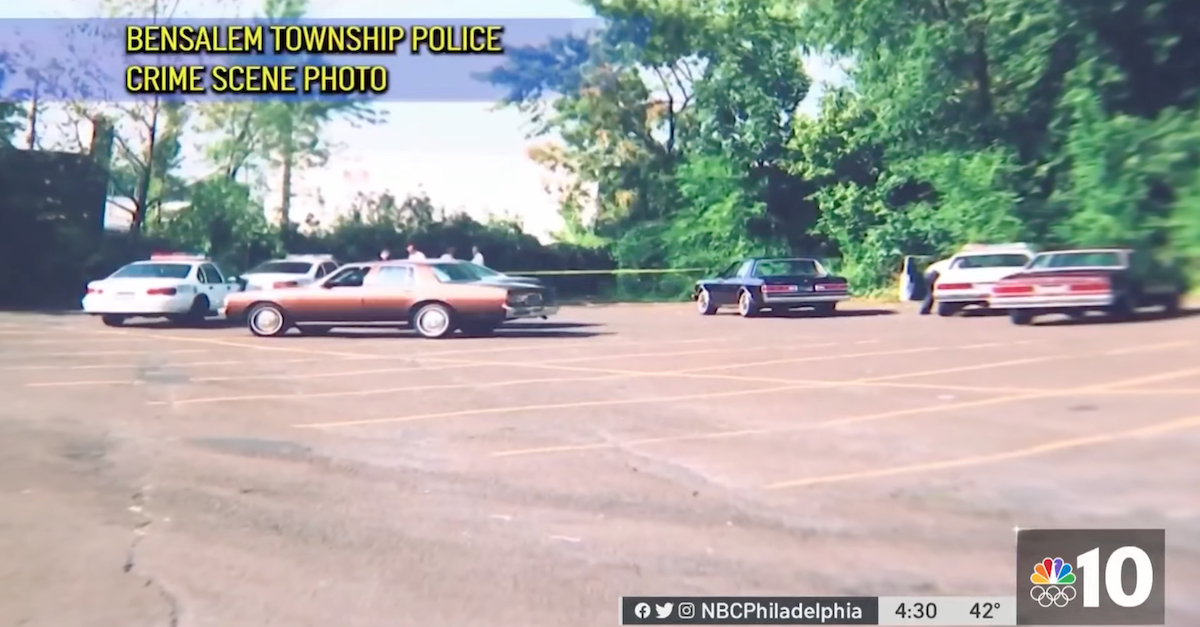 An evidence photo obtained by WCAU-TV shows the scene where Merrybeth Hodgkinson’s remains were recovered behind a diner.

Also found nearby were “a brown beaded seat cushion (possibly used in an automobile) and two crucifixes, one gold and one silver,” the authorities wrote.

The victim was never identified despite “considerable media coverage,” so she was buried in Telford, Pa., under the name “Jane Doe.” The victim also did not match any then-available missing persons reports, the police said. 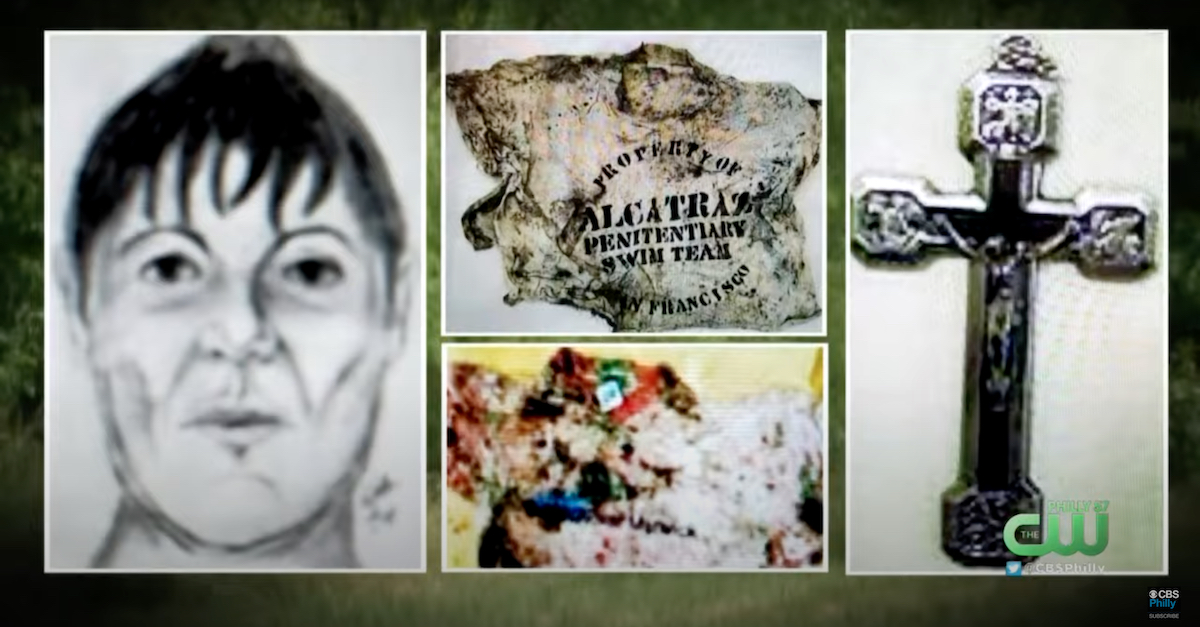 An original artist’s rendition of what the victim may have looked like and police evidence photos of some of the materials collected from the burial scene appear in a KYW/WPSG screengrab.

The Bensalem Police Department exhumed the victim’s remains for DNA testing in May 2004. A profile was extracted by the University of North Texas Center for Human Identification and was subsequently uploaded to CODIS, the Combined DNA Index System database maintained by agencies nationwide. More than “50 missing women were excluded” as possible matches between 2004 and 2021, but no direct matches were uncovered — until recently.

The DNA profile was uploaded to DNA websites GEDmatch and FamilytreeDNA.com, authorities said. From there, “genealogy research” conducted by Jennifer Moore of Innovative Forensic Investigations led to the identification of the decades-old remains.

“With additional sibling DNA comparison testing, the Bensalem Twp. Police Dept. is confident that Jane Doe has been identified as Merrybeth Hodgkinson of Warminster, PA,” the department announced.

“Merrybeth was approximately 31 years old when she died and worked as an exotic dancer in the Lower Bucks County area,” the Bensalem Police Department’s press release noted. She had been living at a Rhawn Street address in Philadelphia and at several motels when she died. The local newspaper said she grew up in Bucks County.

Now, the authorities are asking for help to determine who may have killed Hodgkinson. They’re asking people who knew the victim to call Detective Chris McMullin of the Bensalem Police at 215-633-3726 or Detective Greg Biedler of the Bucks County DA’s Office at 215-348-6344. 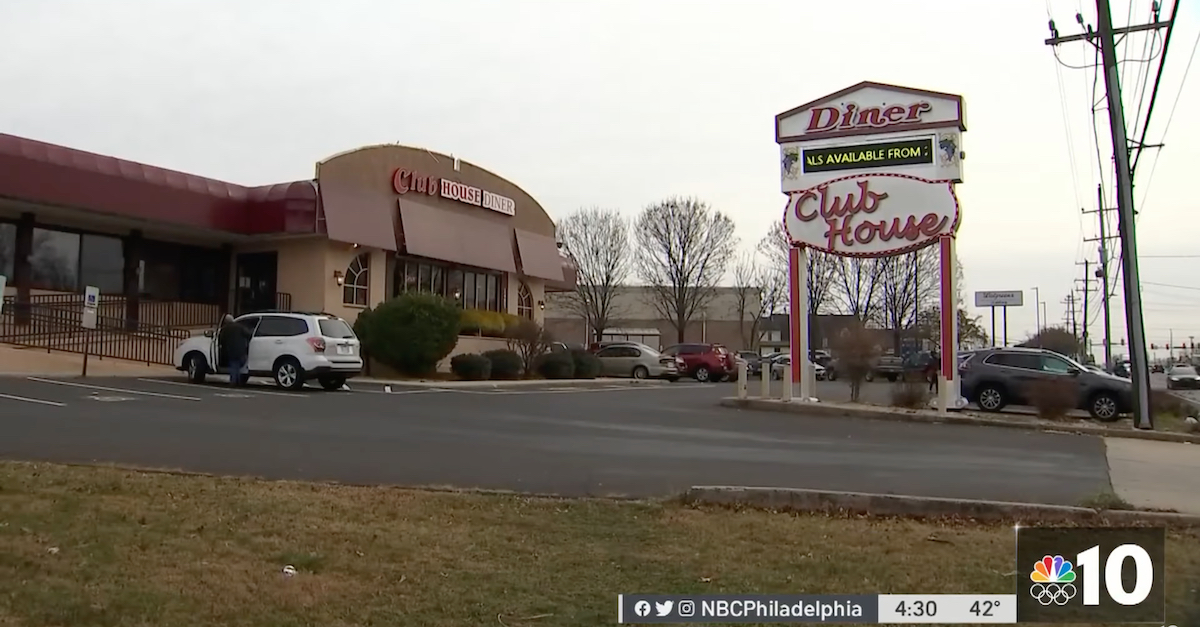 The exterior of the Club House Diner in Bensalem, Pa., as it appears today. (Image via WCAU-TV screengrab.)

McMullin, who was a patrolman when the remains were found, told the Courier Times he was “dissatisfied with the original investigation” and decided to investigate the matter with a number of other cold cases.  Volunteers even helped make a clay model of what the victim might have looked like based on the bones that were recovered. Those efforts did not bear fruit; the DNA testing eventually did.

Hodgkinson’s siblings told the authorities that their sister was reported missing to police departments in Warminster and Philadelphia. However, according to the Courier Times, McMullin “said he found no missing person report entered into the national database law enforcement uses.”

The courts declared Hodgkinson legally dead in 2006, the newspaper noted.

McMullin said he “believes he has identified a person of interest who may have information” about Hodgkinson’s death, the newspaper continued, but McMullin did not go into a great amount of detail initially. Later, however, he said a man named William “Wild Bill” Montgomery, 58, a former Bensalem resident may have information about Hodgkinson’s death. Montgomery admitted murdering an exotic dancer named Toshiko Ciaccio, 42, and disposing of the body in a similar manner. Montgomery also pleaded guilty to murdering another woman, Amy Moore, 25. According to prison records, he is currently locked up in a prison near Pittsburgh. It is unclear if McMullin has a second person of interest in mind or if Montgomery is his primary focus. 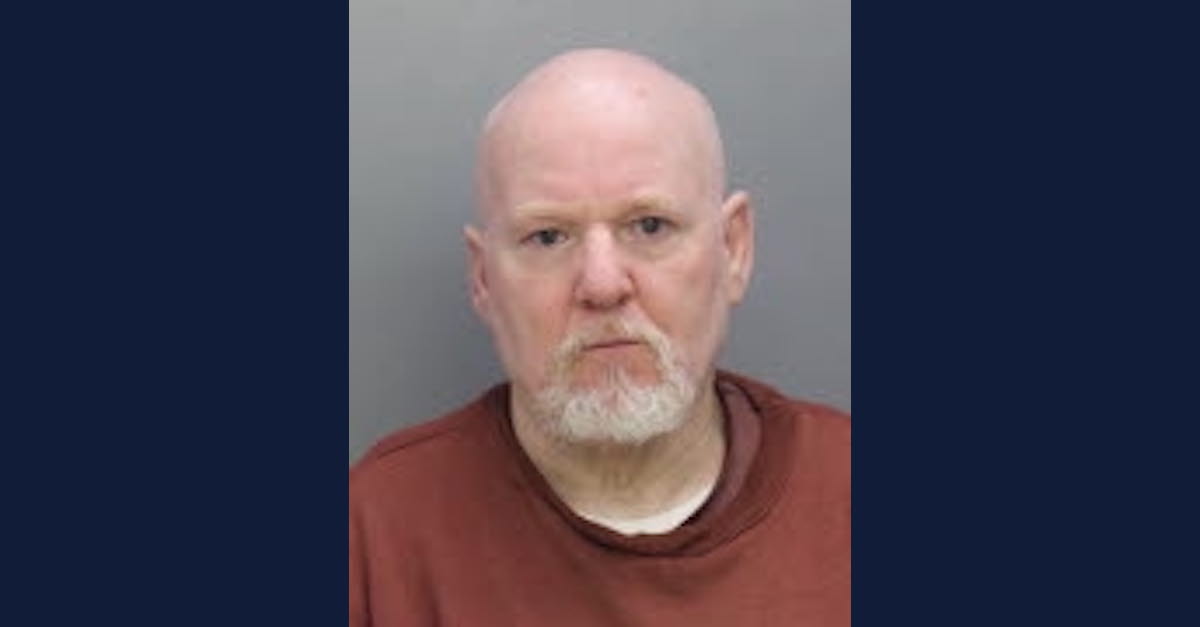