Karla Jackelin Morales on the Run from Murder Trial: DA

Accused Plotter in MS-13 Machete Murder Cut Off Her Ankle Monitor and Is on the Run: District Attorney 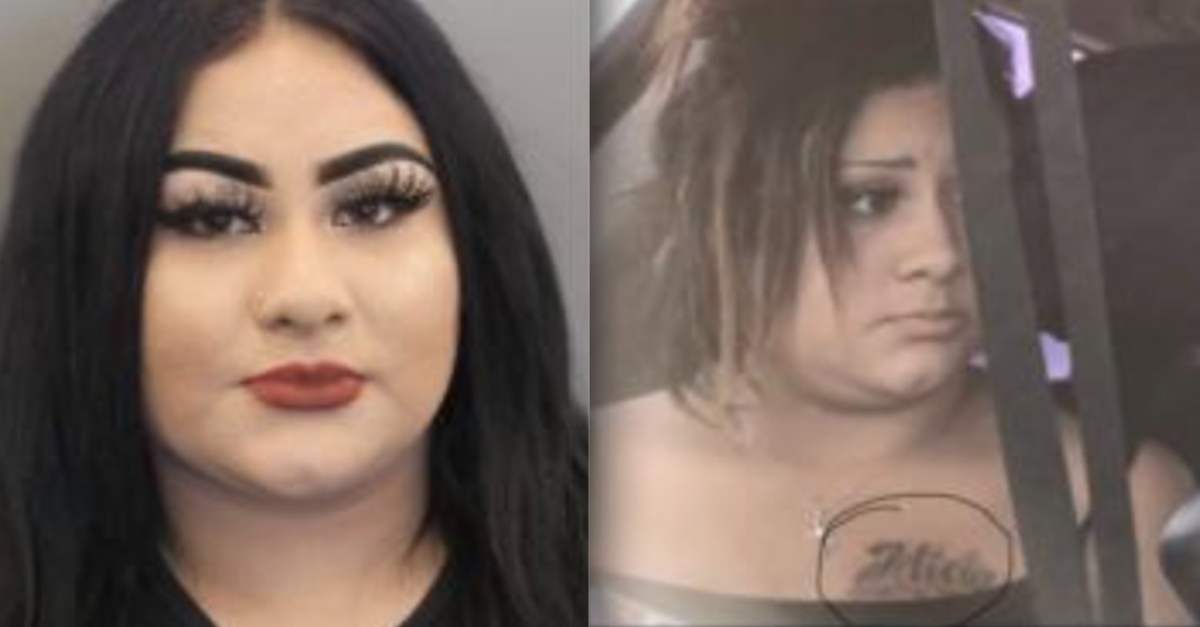 Karla Jackelin Morales, and another picture of her, this time featuring “Alicia” tattoo.

Authorities say that the final person charged with helping murder a young Texas man is on the run. Karla Jackelin Morales—a 20-year-old who allegedly lured 24-year-old Jose Villaneueva to being hacked with machetes and shot by members of the MS-13 gang—cut off her ankle monitor ahead of her trial, according to the Harris County District Attorney’s Office.

After being unable to find her for months, authorities are seeking the public’s help.

They describe Morales—whose nicknames have been Cherry, Karlita, Missy, and Foxy—as standing 5 feet tall with a heavy build. She has black hair, brown eyes, and tattoos, including a large one reading “Alicia” on her upper left chest, authorities said.

“Morales was born in California but has family in Central America, including Honduras and El Salvador. Authorities believe she may still be in the Houston area,” officials said.

There is a Crime Stoppers reward of $5,000 for information leading to her capture. Authorities will not ask about the immigration status of potential tipsters, Harris County District Attorney Kim Ogg said. The DA promised that they can remain anonymous even when they get paid.

Officials ask that anyone with information contact Crime Stoppers at (713) 222-TIPS.

If captured, Morales will be the last of six people remaining charged with ambushing and murdering Villanueva, authorities said. Francisco “Psycho” Amadeo Flores-Salazar, a 21-year-old member of the MS-13 gang, pleaded guilty on Oct 18 for a 45-year prison sentence. Just two days later, however, Morales cut her ankle monitor while out on a $60,000 bond, prosecutors said. Prosecutors said this fell far short of their request for a $250,000 bond. Morales faced trial to begin on Oct. 25.

Francisco A. Flores-Salazar, member of a Houston-area cell of the MS-13 gang, has been sentenced to 45 yrs prison for his participation in the murder of Jose Alfonso Villanueva, on 07/’18. Flores-Salazar is the 4th person out of six, who participated in the slaying. pic.twitter.com/bt17v5kX91

Members of the gang had it out for Villanueva because he bad-mouthed the organization during a rap battle, prosecutors said. Morales, then 17, lured him out to a field near Lewis Elementary School in the community of Spring, Texas. Ostensibly, they were going to smoke marijuana together as his belated birthday present. Flores-Salazar was among the men waiting for Villaneueva. He had told authorities had slashed and hacked the 24-year-old at least twice before other men fatally shot him. He also said that Villaneuva belonged to a rival gang.

Morales allegedly said that she told some of the men she did not want to carry out this killing out anymore, but they told her it was too late, according to KPRC.

Ogg made no note of this supposed change of heart on Wednesday. As far as she was concerned, Morales played a key role in Villanueva’s death and has to pay for it. This was no killing done in the heat of the moment. It was planned for weeks.

“She helped plan and plot this vicious execution, and somebody out there knows where she is hiding,” Ogg said. “You can do the right thing by helping deliver justice for Jose’s family, and you can collect a reward for your efforts.”