‘A Sight That No One Should Ever Have to See’: Police Believe Mass Shooter Used Rifle to Murder 8 People Before Killing Himself at Indianapolis FedEx 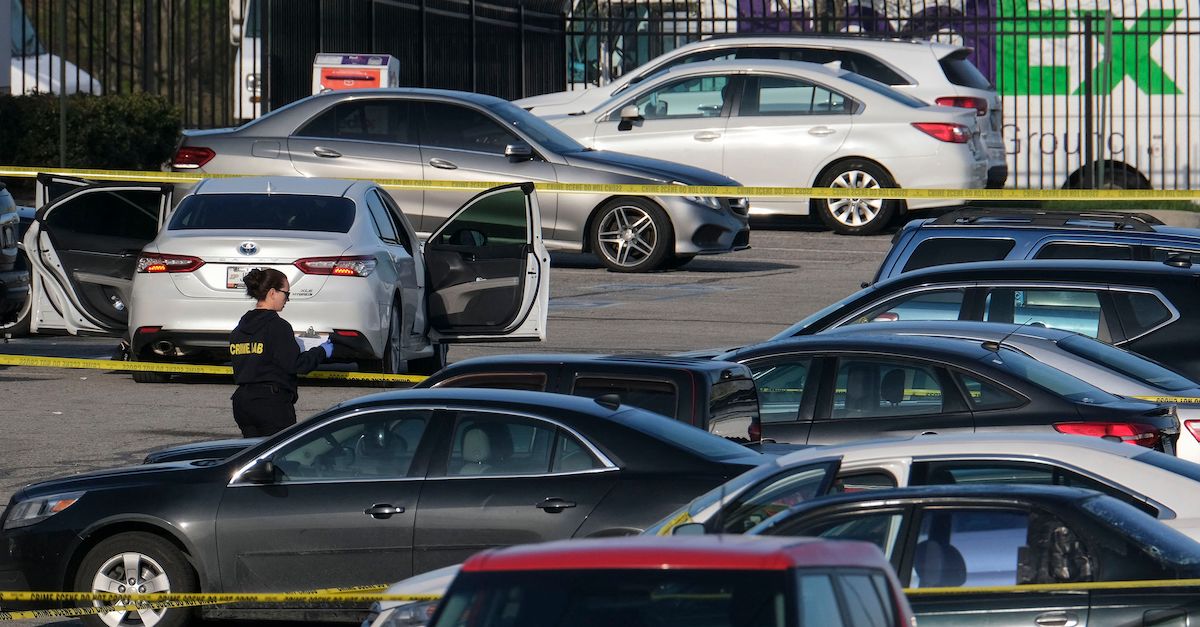 A crime lab technician works in the parking lot of the site of a mass shooting at a FedEx facility in Indianapolis, Indiana on April 16, 2021.

Nine people, including a suspected gunman, are dead after a shooting at an Indianapolis FedEx facility, the Indianapolis Metropolitan Police Department (IMPD) said in the early hours of Friday morning.

The shots reportedly rang out for 17 minutes before the gunman was confronted by an officer, local reporters said at the scene. Police could not immediately confirm that information in an overnight press conference.

“We’re still trying to figure out how, why, what went on,” said Indianapolis Police Officer Genae Cook at the scene. “This building is going to be closed for a while due to this investigation.”

The shooting began just after 11:00 p.m. on Thursday, Cook said. Officers were dispatched to a report of shots fired at the FedEx Ground Plainfield Operations Center at 8951 Mirabel Road in Indianapolis. The location is immediately southwest of the Indianapolis International Airport, which is on the city’s southwest side.

The shooter shot and killed himself, the police said.  He was identified Friday afternoon as Brandon Scott Hole, 19, a former FedEx employee who last worked for the company in 2020.  Police did not know if he resigned or was fired.

Cook said at least four people went to the hospital by ambulance; one of those four was in critical condition with apparent gunshot wounds. Two people were treated on the scene by medical staff and released.  Later Friday morning, the police suggested five people were seriously hurt.

“It’s unfortunate that emotions are very high here; there are a lot of people — not just officers, but family members — who are still arriving and still learning about this incident,” Cook said.  This occurred after many of them went to bed, and some are just now waking up to this.  We ask for your continued support for everyone here involved.  We understand that there are a lot of moving parts, and we ask for your patience as we gather the most accurate information.”

“It is very heartbreaking,” Cook continued. “The officers responded, they came in, they went in, and they did their job, and a lot of them are trying to face this because this is a sight that no one should ever have to see.  But we . . . need to come together; we need to support one another.”

“This is a tragedy, but yet through it all, we will come through it,” she added.

Police asked witnesses and surviving victims to contact them.

Reporters at the scene where the shooting unfolded asked Cook to contextualize what happened in Indianapolis against other mass shootings in recent days and weeks in other American cities. Cloaked against the inky black of night, and with television lights providing a metaphor for the blinding search for answers, Cook replied as follows:

“You know, that’s a great question. You know — you have to look at your own life . . . look at the positive things in your own world and you have to keep going. And you gotta to look for a way to support each other whether it’s your neighbor, the guy down the street, your family member — That’s where you have to start at. And you just keep supporting one another, and it will always get better.”

Later Friday morning, Indianapolis Police Deputy Chief Craig McCartt said officers arrived to find a “chaotic” scene — but that he believed the shooter “took his life very shortly before officers actually entered the door of the facility.”  He added that the shooting lasted a few minutes but clarified that the department had not established a complete timeline.

“The suspect came to the facility, and when he came there, he got out of his car and pretty quickly started some random shooting outside the facility,” McCartt said while noting that the findings of the investigation were still preliminary. “There was no confrontation with anyone that was there. There was no disturbance; there was no argument. He just appeared to randomly start shooting, and that began in the parking lot, and then he did go into the building, into the facility for a brief period of time before he took his own life.”

When asked if the shooter had a “connection” to the facility, McCartt said he did not yet know. He said the police were working with FedEx to see if the suspect was known to the company and “could not confirm” that the shooter was an employee as of Friday morning.

A search was reportedly occurring Friday morning at a home which authorities believe might be the home of the shooter, but McCartt was unwilling to say for certain whether the home being searched was, indeed, that of the gunman.

Among the issues which added to the chaos is that employees fled without their cell phones, the deputy chief said.  Many were still waiting to contact relatives.  A family unification center was setup at a nearby Holiday Inn on Stansted Road.

McCartt said the shooter appeared to have used at least one rifle.

Alfarena McGinty, the Chief Deputy Coroner for Marion County, Ind., said all thirty staff members in her office will be working around the clock with help from neighboring counties. She said her office hadn’t even entered the scene as of Friday morning.

“It is very time consuming, so it definitely takes a toll on our staff,” McGinty said. “We are trying to work with our law enforcement partners to understand and address these issues that are causing this increase in death investigations . . . because it is mentally draining; it is physically draining; we’re going to work for literally the next 24 to 48 hours just to give answers to the families.”

FedEx released two statements about what occurred. The first reads as follows:

We are deeply shocked and saddened by the loss of our team members following the tragic shooting at our FedEx Ground facility in Indianapolis. Our most heartfelt sympathies are with all those affected by this senseless act of violence. The safety of our team members is our top priority, and we are fully cooperating with investigating authorities.

The second was written by FedEx Chairman and CEO Frederick W. Smith:

It is with a heavy heart that I write to you regarding the tragedy that occurred at our FedEx Ground facility in Indianapolis last night. While it will take some time to fully understand what happened, we know we lost eight team members in this senseless act of violence.

First and foremost, I want to express my deepest sympathies to the families, friends, and co-workers of those team members. Our priority right now is in responding to the situation on the ground and helping our team members and law enforcement. We have a team onsite in Indianapolis to provide support, and we are making counselors available.

This is a devastating day, and words are hard to describe the emotions we all feel. Please keep the Indianapolis team and surrounding community in your thoughts and prayers as we continue to support and care for each other in the difficult days ahead.

“Last night, Indianapolis was revisited by the scourge of gun violence that has killed far too many in our community and in our country,” said Indianapolis Mayor Joe Hogsett, a Democrat. “No piece of information will restore the lives that were taken or the peace that was shattered. Nothing we learn can heal the wounds of those who escaped with their lives but who will not bear the scars and endure the memories of this horrific crime. What we are left with this morning is grief. Grief for the families of those killed; grief for the employees who have lost their coworkers, and grief for the many Americans struggling to understand how tragedies like this continue to occur again and again.”

“And it seems to me that, beyond the need of comfort for the grieving, we must guard against resignation or even despair,” the mayor continued. “The assumption that this is simply how it must be, and that we might as well get used to it — we need the courage that compels courageous acts that push past weariness.”

Chief of Police Randal Taylor said this was the “third time since January” that his community woke up to news of a “senseless” crime.

“We’ve all been shaken by this heinous act,” said Chief Taylor while extolling the bravery of the officers who rushed into danger.

“FedEx is a major employer in this city,” he said while noting that many people in the greater metro are related to FedEx employees — including him.

Paul Keenan, the special agent in charge of the FBI Indianapolis Field Office, said the best way his office could honor the victims was through a “meticulous investigation.” He said it was “premature” to speculate about the gunman’s motives.

Two months ago, the Indiana House of Representatives voted 65-31 to eliminate license requirements for residents who wished to carry a handgun.

“Supporters of the bill argue that the permit process punishes law-abiding citizens and residents shouldn’t have to pay for a right guaranteed by the Second Amendment,” Fox News said. Police agencies were reportedly lined up against the plan.

Watch the Friday morning updates below:

[Editor’s note:  this is a breaking news report which has been updated.]