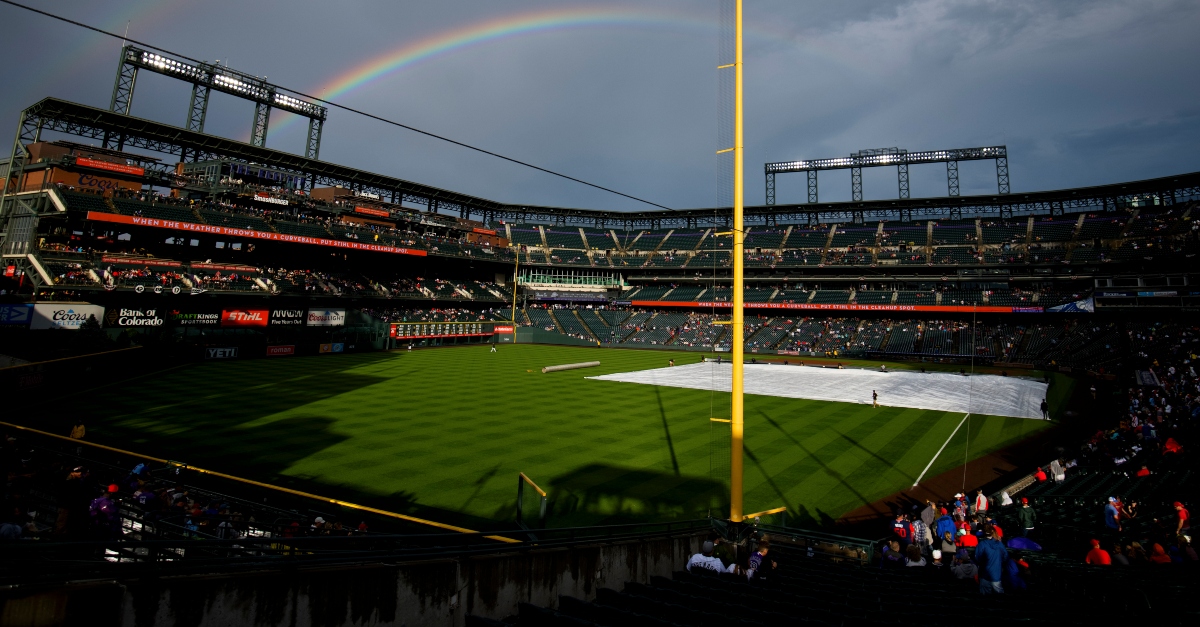 Coors Field during a game between the Colorado Rockies and the St. Louis Cardinals on July 1, 2021

Four people were recently arrested on firearm and drug charges just a short walk away from Coors Field, where the MLB will hold its annual All-Star Game. Police reportedly voiced concern about a “Las Vegas-style shooting,” referencing the most catastrophic mass shooting in United States history. But other reporting says that this is now believed to be an exchange of guns and drugs.

Denver cops were vague about the allegation, only describing this as a “suspicious occurrence” and saying they got a tip from the public. Officers responded on Friday to the Maven Hotel, they said. This is mere steps away from Coors Field.

Update regarding the ongoing investigation from Friday night in the 1800 block of Wazee St. Please contact @CrimeStoppersCO at 720-913-7867 if you have any information regarding this case. pic.twitter.com/HbOE6M5oQH

A housekeeper had discovered more than a dozen firearms and more than 1,000 rounds of ammunition, according law enforcement sources in a KMGH-TV report. Officers removed 16 long guns, the ammunition, and body armor.

One of the men arrested Friday posted a Facebook message in which he mentioned a recent divorce, and said he was going to “go out in a big way,” law enforcement sources said.

Sources voiced concern that the vantage point, large crowds, number of weapons, and ammunition could have ended in a “Las Vegas-style shooting” during the MLB All-Star Game, which is scheduled for Tuesday.

But other reporting says that the arrests were actually for a deal exchanging guns and drugs.

Source says the four who were arrested are “talking” as Denver police sort this out. The amount of weapons “is not unusual in a drugs for guns deal”

“The Denver Police Department continues to investigate the incident at the hotel in Downtown,” the Denver Police Department said in a statement to Law&Crime. “Due to the ongoing investigation, we are unable to provide more details other than to confirm we are working with our local and federal law enforcement partners on this investigation and continue to ask the public if they see something – say something.”

The reference to a “Las Vegas-style shooting” was in regard to Nevada resident Stephen Paddock, 64, opening fire on people attending an outdoor country music concert in Las Vegas. He was perched from his hotel room on the 32nd floor of the Mandalay Bay Resort and Casino. Paddock would never see justice in court. He died by suicide. Most of the 24 guns found in his hotel rooms were AR-10, or AR-15 rifles.

The death toll of victims rose to 60 after two women died from complications of their injuries. More than 850 people were injured, according to authorities in an Associated Press report from 2020. Of those, 413 were hurt from bullets or shrapnel, and the rest were injured fleeing the scene. The FBI suggested Paddock’s motive will forever remain unknown.

It is unclear if the four people arrested in the Denver case have attorneys in this matter.

Officers ask that anyone with information on the Maven Hotel incident to contact Metro Denver Crime Stoppers at (720) 913-STOP (7867).

Note: We added reporting that said the suspects were actually involved in a deal exchanging guns and drugs. We have also added the statement from the Denver Police Department.