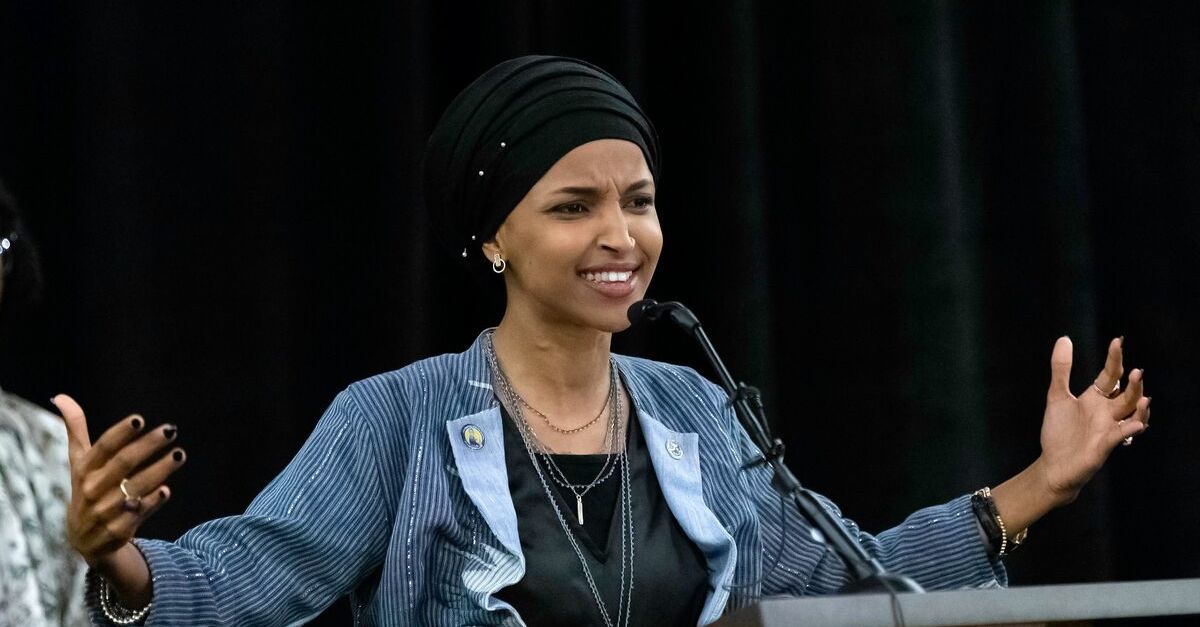 A Republican Party display in the West Virginia statehouse compared freshman Representative Ilhan Omar (D-MN) to the terrorist attacks of 9/11.

Designed like a meme on paper, the display featured two images juxtaposed with one another. The first image showed the World Trade Center in lower Manhattan engulfed in flames just before the towers fell.

The second image was a picture of Omar—wearing hijab—as she sits and watches testimony during a congressional hearing.

“Never forget” – you said..I am the proof – you have forgotten

Omar responded to the islamophobic display on Twitter—linking it to the recent capture and indictment of an alleged white nationalist terrorist who had included Omar’s name on his list of potential targets.

“No wonder I am on the [hit list] of a domestic terrorist,” the Minnesota representative tweeted.

She also said that “Assassinate Ilhan Omar” was written on local gas stations.

This poster is in your Capitol on a booth sponsored by @WVGOP “When someone shows you who they are, believe them” pic.twitter.com/4k566ztHWo

After several other Democrats became aware of the the display, complaints were lodged with GOP leadership and one GOP delegate eventually resigned after allegedly endorsing the general theme behind the captioned images.

Republican Delegate—and the West Virginia statehouse’s sergeant at arms—Anne Lieberman is the GOP member in question.

According to Democratic Delegate Mike Angelucci, Lieberman said “all Muslims are terrorists.”

The sergeant at arms of this body had enough nerve to say to us all Muslims are terrorists. The sergeant at arms of this body that represents the people of the state of West Virginia said all Muslims are terrorists. That’s beyond shameful. And that’s not freedom of speech, that’s hate speech. That has no place in this House, the people’s House, and I am furious. I don’t want to see her representing the people of this great state in this house again.

The West Virginia Democrat went on to draw a parallel between members of his own faith who engage in violence.

Lieberman denied making the comment but said little else about the incident when questioned by West Virgina Public Broadcasting. She later took a personal meeting with the speaker of the West Virginia house.

The West Virginia GOP accepted Lieberman’s resignation later that day and issued a statement denouncing the anti-Muslim signage and condemning hatred and bigotry.

“The West Virginia Republican Party does not approve, condone, or support hate speech,” the statement from GOP state chair Melody Potter says. “One of the exhibitors at our West Virginia Republican Party Day at the Capitol displayed a sign that we did not approve, were not aware of before the day started, and we do not support. Upon learning about the sign, we immediately asked this exhibitor to remove the sign.

“Our Party supports freedom of speech, but we do not endorse speech that advances intolerant and hateful views. We have shown that when West Virginians are united, when we respect each other, embrace our differences and focus on moving our state forward what we can accomplish.”

While GOP leadership denounced the display, other West Virginia Republicans appeared to defend the Islamophobic message.

“While I may not agree with everything that is out there, I do agree that freedom of speech is something that we have to protect,” GOP Delegate Dianna Graves said during a floor speech. Several other Republicans in the Mountain State took the same perspective.

The Young Turks’ Cenk Uygur later mocked the Republicans who stood by the anti-Omar graphic on freedom of speech grounds.

“It’s funny how it only applies when you say racist things,” Uygur noted during a Friday night broadcast.

Editor’s note: this article has been amended post-publication to include additional quotes and for clarity.