Teenage ‘Dr. Love’ Out on Bail, Storms Out of GMA Interview 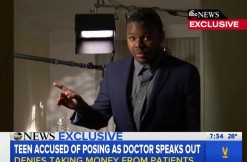 Remember that teenager arrested for practicing medicine without a license in Florida? (This happened Tuesday, people.) Now out of jail on a $21,000 bail, he talked to Good Morning America for a Thursday episode, and ended the interview by walking out.

“I’m going to have to cut this interview short,” said Malachi Love-Robinson to GMA correspondent Matt Gutman, sometime after being asked, point-blank, if he was a “fraud.”

But why get mad? Let’s rewind this a bit.

“I do currently hold a Ph.D,” said the 18-year-old Love-Robinson earlier in the talk. “At what, I don’t feel comfortable disclosing because that is not the issue here.”

Love-Robinson, who went by “Dr. Love,” denied he pretended to be a medical doctor. He insisted he never told people he was an M.D., even though a taped-over sign at his West Palm Beach clinic stated that he was.

“That sign on the door was actually due to be changed,” Love-Robinson told Gutman.

But the “no license” accusation isn’t his only worry. He faces a total of 7 charges, including grand theft, and fraud. For example, an elderly woman issued a criminal complaint saying she’d paid him $3494 to fix her severe stomach pain.

“What services did you provide for that money?” said Gutman.

“I can tell you this,” answered Love-Robinson. “Accusations are merely accusations. And ‘services,’ you’d have to define that. Whether she paid for me to just show up, that’s up to her.”

“No, I am denying that,” said Love-Robinson.

In Florida, practicing medicine without a license is a third degree felony, punishable by up to 5 years in prison, and a fine of up to $5,000.