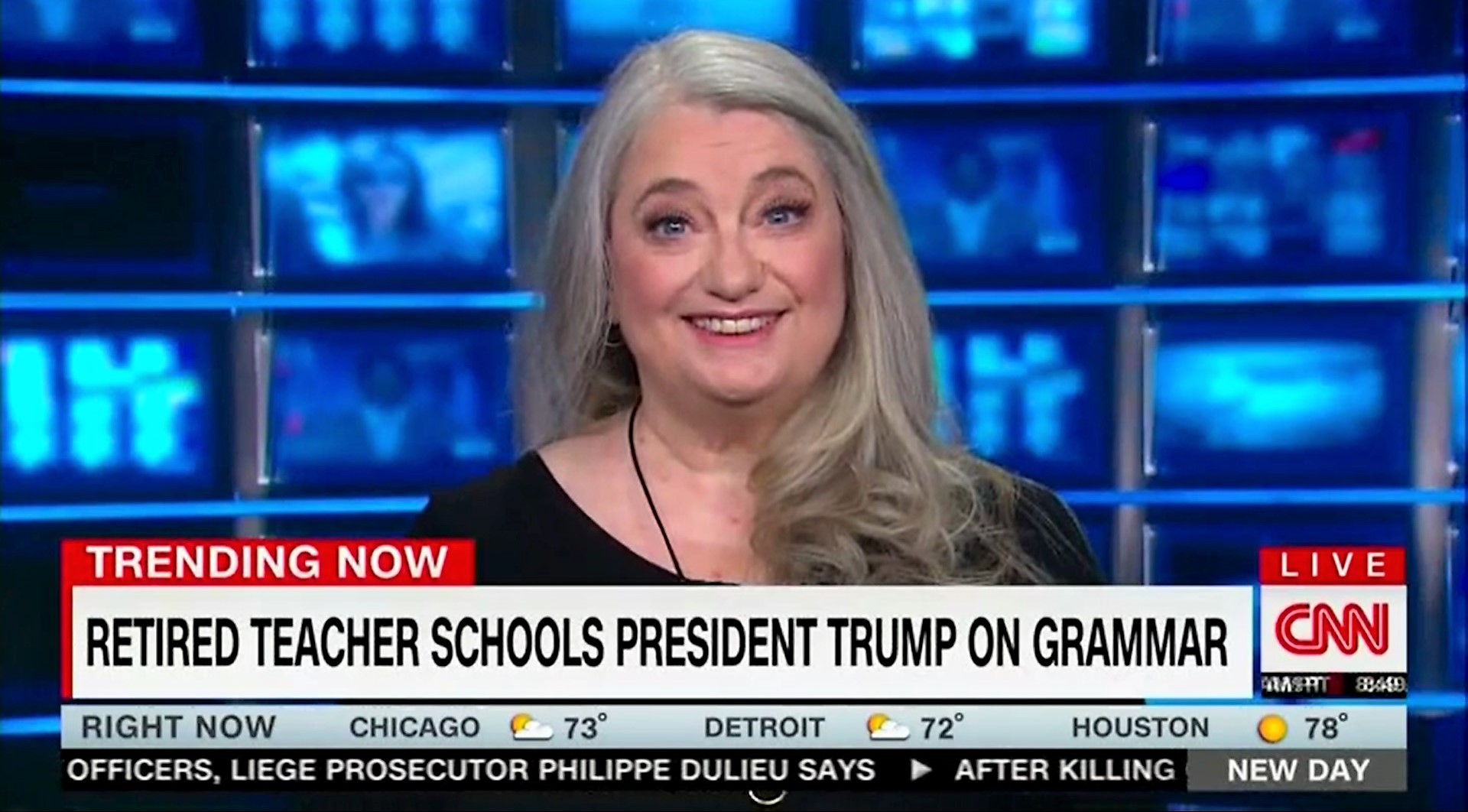 The retired English teacher who “corrected” a now-viral letter from President Donald J. Trump and who then returned the “corrected” letter to the White House could perhaps use some schooling on the way the law works. In correcting Trump’s letter, the teacher marked something incorrect which was actually correct — legally speaking. (While we’re at it, the grammatical errors weren’t really errors, either; indeed, the letter was more correct than the teacher thinks.)

The teacher, Yvonne Mason, received the letter from the Trump White House in response to a letter she sent to President Trump. Her original letter raised concerns about the Parkland, Florida school shooting and asked President Trump to visit the families of those who died in the massacre. Perturbed by what she claimed was sloppy grammar in the rare return letter from the president, she posted her “corrected” letter to Facebook. It initially made the pages of her local paper, then the New York Times. She appeared on CNN on Monday to continue her jabs. There, she said the letter deserved a grade of “D.” She also opined that while the letter was probably written by staffers, the president signed it. (Has she ever heard of Autopen?) (WATCH the interview here.)

Here is the legal issue we noticed:  in his letter to the teacher, President Trump references a number of laws which he seeks to change or which he did change in response to the Parkland shooting. He also references a “rule.” Confused, the teacher circled “rule,” put a question mark in the margin, and said, “explain ‘rule.'”

That sound you just heard is me slamming my head against the desk at which I’m sitting.

There is a hierarchy of laws under the American system of government. The Constitution is the supreme law of the land. It sets forth three branches of government:  executive (which enforces the laws); legislative (which writes the laws); and judicial (which interprets the laws). Here’s the thing:  the branches each basically write their own “laws” which play off of one another. So, really, there is more than one type of “law.” The president’s letter accurately notes this. The teacher appears to be confused by it.

Perhaps the English teacher could benefit by calling up her social studies buddies for a primer. When most people reference federal “law,” what they really mean are the statutes written by the Senate and the House of Representatives. Executive branch agencies, such as the Environmental Protection Agency, the Department of Labor, etc., etc., etc., which are constitutionally attached to the president, have “rulemaking authority” to write “rules” which expound upon the more rough parameters set forth by the legislature in statutes. Lest we forget, the hierarchy, in descending order, contains all sorts of laws: the Constitution, statutes, administrative rules (which have the “force of law”), and judicial opinions (which — oh no! — have their own hierarchy, too!). What about the opinions of administrative law judges who work for executive branch agencies authorized by congress but constitutionally attached to the president? Gosh, this gets complicated, and we haven’t even gotten into city ordinances or state statutes.

Trump’s letter accurately differentiates between “rules” and “laws.” The teacher’s question mark response suggests either (1) she just doesn’t get the concepts I just painstakingly explained; or (2) if she does get it, she wants her “student” — President Trump — to explain it to her solely to prove that he knows it as well. The second tactic is ridiculous given the Trump letter’s careful differentiation between the two. He gets it. My guess is that she does not.

The teacher told CNN she was most “appalled” by the “random capitalization of words that typically aren’t capitalized.” In the letter, the word “Nation” is frequently capitalized. When CNN pointed Ms. Mason to the fact that the government has its own stylebook, Ms. Mason botched the answer by flipping the script and pretty much claiming she was the authority: “My philosophy as a teacher is if we aren’t teaching this in the classroom, then why are we using it in a stylebook.” She then went on to entirely misinterpret the rule being applied.

Under the Government Printing Office’s stylebook, available here, Rule 3.20 on page 32 and the example on page 68 clearly state that “Nation” is capitalized in federal publications where the word is used as a replacement for the proper name of the country.

Rather than take the time to pull out her own stylebook(s), Ms. Mason confused that rule with the one for proper nouns, which in the stylebook is a totally different rule, and accused Trump of engaging in a “grammatical tragedy of the commons” where people start “randomly deciding which words are proper nouns and which aren’t.”

The teacher said her dream was “clear communication.”

“Communicate clearly what you want, and you’re more likely to get it because language is the currency of power.” (That’s a grammatically-incorrect sentence, Ms. Mason; plus, the stylebook clearly communicates what it wants.)

Hopefully, Ms. Mason taught her students that the rules change depending on the intended vehicle of publication:  the MLA, APA, and Chicago Manuals of Style are not the end of the stylebook world. The legal profession uses the Bluebook for citations, the Chicago Manual of Style where the Bluebook is silent, and the Redbook for other grammatical guidance. Reporters use the Associated Press Stylebook. The Government Printing Office has its own stylebook. Guess what? President Barack Obama followed it when he also capitalized words like “Nation” in his own letters (examples are here, here, here, and here). So did Michelle Obama (here). We are not certain whether Ms. Mason plans to spend her retirement correcting the Obamas, too.

Having been schooled by and having worked with both good and bad educators over the years, I am well versed in the sorts of histrionic fits some educators can get themselves into while defending their perceived entitlements to paychecks. If Ms. Mason gives President Trump a “D” on grammar and communication, I give her an “F” on defending her rationale for her judgment.

Aaron Keller is a live, streaming trial host for the Law&Crime Network. He is licensed to practice law in two states and served as a professor of English and communications for several years before joining Law&Crime. Follow him on Twitter:  @AKellerLawCrime.