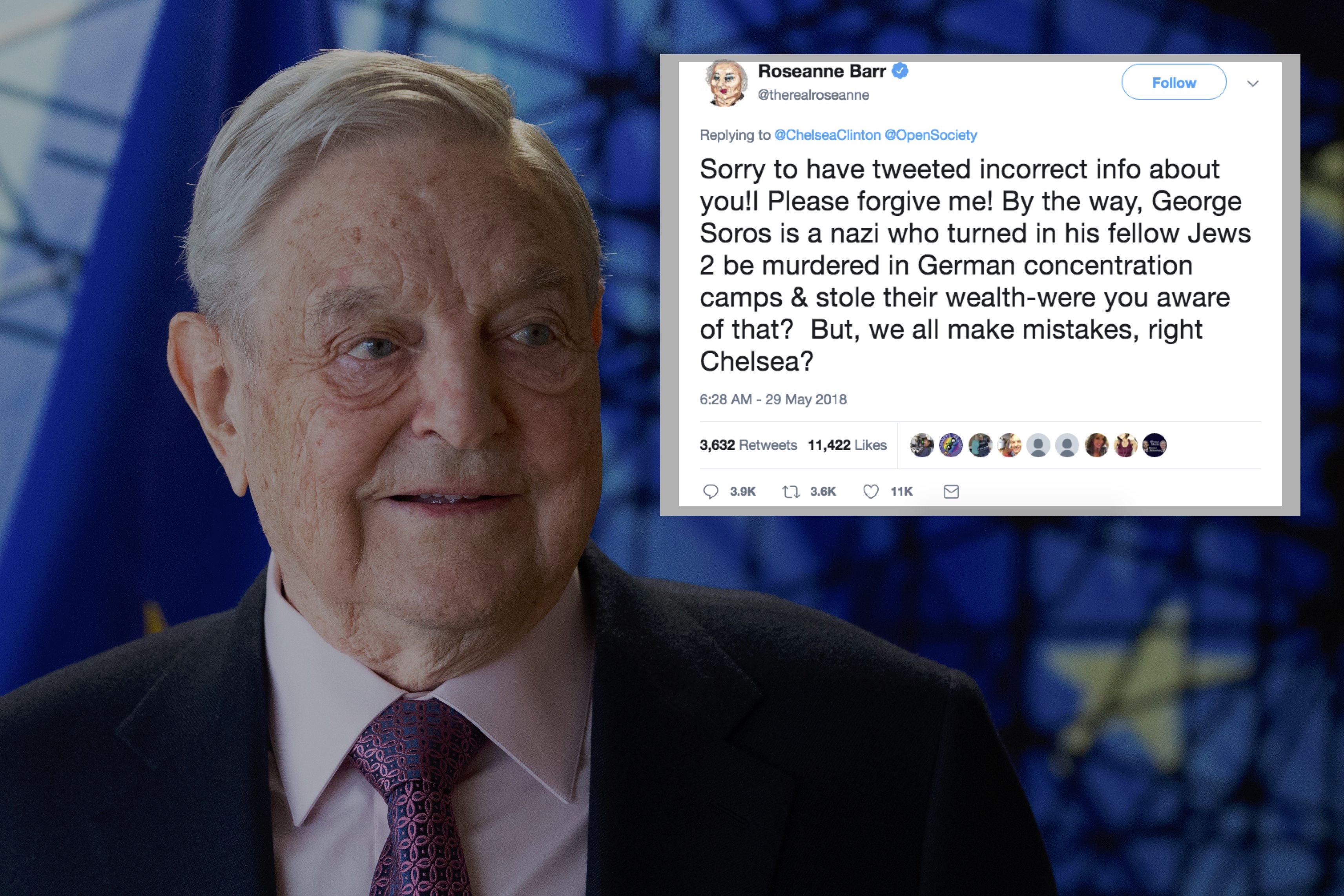 As a result of this tweet, Soros likely has a valid defamation case against Barr, should he decide to take legal action against the recently-unemployed actress. Specifically, Soros could sue for defamation by libel. At issue would be the various false accusations regarding Soros’ time during the Holocaust.

Sorry to have tweeted incorrect info about you!I Please forgive me! By the way, George Soros is a nazi who turned in his fellow Jews 2 be murdered in German concentration camps & stole their wealth-were you aware of that? But, we all make mistakes, right Chelsea?

George Soros lives in a wealthy suburb of New York City, so New York State would be the most likely jurisdiction for a potential lawsuit against Barr. Under New York law, the elements of a defamation claim are: (1) a false statement; (2) published to a third party without privilege or authorization; (3) with fault amounting to at least negligence; and (4) that caused special harm or defamation per se. This restatement of New York’s test for defamation comes by way of Dillon v. City of New York.

At the expense of sounding a bit conclusory, Soros can easily argue the above points because absolutely everything Barr said about him is completely and demonstrably false.

Soros was aged 9-14 during the Holocaust. At this time, he was forced to split up with the rest of his family and go into hiding as the adopted God-son of a Christian official in Budapest. Soros’ father purchased forged papers to hide his family’s Jewish identity and bribed the official in question in order to protect his son from the concentration camps.

The Christian official’s job underscores the banality of evil: he was a mid-level functionary who was tasked with collecting Jewish property after victims were sent to concentration camps. To be clear: Soros himself never took part in this activity, but as a child he accompanied this official and was forced to watch it happen.

There’s quite literally zero evidence for the claim that Soros was a member of the Nazi Party. There’s also zero evidence for the claim that Soros collaborated with the Gestapo to turn in other Jews. As for the wealth-stealing accusation: that’s an intentionally dishonest interpretation of what Soros himself said during a 60 Minutes interview in 1998. This interview is frequently cited by anti-Semites in an attempt to throw mud at Soros. Here’s the relevant portion of said interview:

If I weren’t there, of course I wasn’t doing it, but someone else would, would be taking it away anyhow. And it was, the, whether I was there or not, I was only a spectator, the property was being taken away. So I had no role in taking away that property.

2. Roseanne Barr definitely published the statement to a third party

This element is easily dispensed with because Roseanne’s tweet was quite clearly published to various third parties. Under New York law, a single publication will suffice to incur liability and the single-publication rule applies to internet postings in New York State. Here, Barr clearly publicized her inaccurate statements to thousands upon thousands (if not millions) of third parties by posting them on Twitter. Notably, New York State’s “republication” rule is not very forgiving and it would appear that retweets of Barr’s tweet are likely to restart the statute of limitations at the very least.

3. Roseanne Barr’s statement was made deliberately and likely with actual malice

This is the area where most defamation lawsuits go to die. Under the Supreme Court precedent of New York Times Co. v. Sullivan, a public figure-plaintiff must prove the alleged defamer-defendant acted with “actual malice” when the defamatory and libelous statement was published.

A legal term of art, “actual malice” doesn’t have much to do with malice in the general sense of spite, resentment or similar ill feelings. Rather, the phrase simply means, per Sullivan, “knowledge that [the statement] was false or with reckless disregard of whether it was false or not.”

Here, Roseanne Barr, a highly political and politically-engaged multimillionaire should have known the conspiracy theories she published about Soros were false. There may be some evidence to suggest she actually knew those statements were false, but this is a fact-intensive inquiry which means there’s not much reason to speculate or list potential bits of evidence which could prove Barr’s knowledge. It should be noted, however, that discovery might be used to secure such evidence–if it is available.

Instead, the more likely avenue for success here would be to argue that Barr acted with reckless disregard of the truth (or falsity, as it were) of the Nazi collaboration charges she leveled against Soros. Again, Barr’s political pedigree is well-established and runs long before her affiliation with Donald Trump and his administration.

Just a few years ago, Barr was fighting Jill Stein for the Green Party presidential nomination. Barr is a well-known political commentator on various issues, frequently appears on television to opine on those issues, and her original sitcom was lauded for its attention to political issues facing working class individuals and families. Barr even once took part in a photo shoot where she dressed up like Adolf Hitler. Soros could plausibly argue that Barr has vast access to and familiarity with political knowledge and that a high-profile billionaire’s alleged Nazi affiliations would be easy enough to check up on.

And, again, Barr’s own wealth could be cited to make a more or less similar point: she can afford to get it right, especially considering the extreme nature of the scurrilous charges she posted on Twitter. Soros can very plausibly argue that Barr’s statements were made with reckless disregard for the truth and while a jury would ultimately decide, he could probably sustain the allegations beyond summary judgment.

Normally, a defamation by libel plaintiff must prove actual damages resulted from the allegedly defamatory statement. This means an actual loss of money or business. Proving actual damages here would be exceedingly difficult because Soros’ business doesn’t have much to do his alleged past behavior. There’s quite simply not much of a case to be made that Barr’s statement would bear any relationship whatsoever on currency speculation and/or running a hedge fund generally.

But none of this actually matters. Luckily for Soros, New York State is a defamation per se jurisdiction. Defamation per se is a legal doctrine which holds that certain statements are so inherently damaging they create an assumption that damages exist simply because the statement was communicated in the first place.

Here, Soros can likely argue with ease that he was charged with a serious crime. Roseanne Barr said Soros was a Nazi. While inaccurate and horribly offensive that’s not a crime. But she also accused Soros of facilitating genocidal murder and outright theft of Jewish wealth. Of course, this was all technically legal under Nazi German rule, but the Nuremberg Tribunal and various post facto legal actions have determined that these were actually war crimes.

How would New York courts interpret those charges against Soros? Two recent cases offer some clues. An email that stated two people “are thieves” was considered defamation per se in a 2011 decision. An anonymous blog accusing the plaintiffs of running an “illegal scam” was found to be defamatory per se in 2008 by a New York court. Here, Barr’s statements that Soros helped round up and murder Jews and then personally stole from them would likely pass per se muster.

In an emailed statement to Law&Crime, Floyd Abrams, one of the nation’s premier First Amendment and defamation attorneys, put it this way, “The case would revolve about whether Roseanne had ‘serious doubts’ about the truth of her undeniably defamatory statements. She would have to decide whether to defend on the ground that she did believe what she said or that what she said amounted to a joke.”