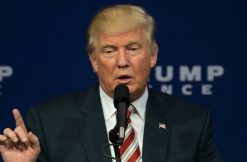 The ACLU announced on Friday that they’ve called on the feds to investigate a Arizona school. The claim: A teacher bullied a student for being a Muslim refugee, and administrators tried to cover it up.

Two of Asli Noor’s kids, named in documents as “A.A.,” and “F.A.,” attended the Academy of Excellence in Phoenix, Arizona until January. She said teacher Faye Myles picked on the 12-year-old A.A. on the basis of his faith and nation of birth. The family is Muslim, and they emigrated to the U.S. from Somalia on refugee visas in 2012. Now the ACLU has written separate complaints to the U.S. Department of Justice Civil Rights Division, and the Department of Education.

The harassment went on for months according to the letters. In one incident, Myles allegedly choked A.A. so hard she left white impressions on his neck. During free time in class, she allegedly singled him out to be quiet, though the other kids could talk.

Apparently, she made her motivations clear. From the ACLU’s letter to the DOJ:

Then, on or about January 22, 2016, A.A. raised his hand in class to answer various questions but, as usual, was ignored by Ms. Myles. As he raised his hand again, Ms. Myles snapped at him, in front of the entire class, “All you Muslims think you are so smart.” She then started ranting about Donald Trump, telling A.A. in front of the entire class, “I can’t wait until Trump is elected. He’s going to deport all you Muslims. Muslims shouldn’t be given visas. They’ll probably take away your visa and deport you. You’re going to be the next terrorist, I bet.”

Classmates started picking on A.A. in likewise fashion, calling him a “terrorist,” and saying he was planning to blow up the school bus, according to the complaint.  But administrators tried to cover it all up after Noor voiced her concerns, the complaint said. Noor was allegedly coerced into signing “voluntary” withdrawal forms to take her kids out of school after one school said A.A. tried to open the emergency door on a school bus.

We reached out to Myles and the Academy of Excellence for comment, and will update this article with any response.

[image via Evan El-Amin and Shutterstock]
–