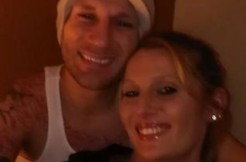 They’re not Bonnie and Clyde. They’re Brittany Harper and Blake Fitzgerald, who cops think are now in Florida after an alleged crime spree in Alabama.

Harper and Fitzgerald have been both charged with kidnapping and theft of property. On top of that, Fitzgerald also faces a first-degree burglary charge.

The charges stem from an apparent three-city crime spree in the state, according to cops. For starters, the Tuscaloosa Police Department say two people kidnapped a hotel night clerk after robbing the Microtel Inn and Suites, according to ABC 33/40. And police think the couple didn’t stop there. The Tuscaloosa incident was reported Sunday morning, around the time more stuff was apparently going down.

Sunday morning, a gunman (believed to be the guy-half of the couple) attempted to rob a restaurant manager in Hoover, but bolted when the victim started screaming. And get this: During that attempted robbery, the same clerk from the night before was hiding under a blanket in the suspect’s vehicle, according to AL.com.

Soon after that, a woman in nearby Vestavia Hills said she was kidnapped during a burglary at gunpoint. In a statement, the Vestavia Hills Police Department say the suspects are a guy and gal who took the keys to the victim’s family’s car. A 2010 silver Ford Edge with the tags, #2720AG7. The victim was released soon after at a Birmingham hospital.

When the night clerk apparently was freed in Vestavia Hills, and talked to cops, authorities started thinking the different crimes were related. Three incidents, three cities, and all it took was a Saturday night and Sunday morning.

Fitzgerald has a hefty criminal history, according to Missouri police. They told ABC 33/40 that he has picked up over 100 charges since 2003. Accusations include rape, DUI, failure to appear, assault. His most recent case in Joplin, Missouri was for an alleged Jan. 22 burglary. Meanwhile, Joplin cops say Harper only has a citation for failing to use a turn signal.

And now Alabama cops think the couple is somewhere in Florida, maybe in the same silver Ford from before.

“The two suspects are armed and dangerous and should not be confronted by anyone except law enforcement,” the Vestavia Police Department wrote in a Facebook statement. “If you have any knowledge or have seen these two suspects, please contact local police and Vestavia Hills Police (205-823-1153) as soon as possible.”

If the couple is arrested in Florida, Alabama officials would likely file a routine extradition request to get them sent back to face charges.