GOP Lawmaker, Removed from Ga. House Chamber for Refusing COVID Test, Compares Himself to ‘Original 33’ Black Lawmakers Who Were ‘Thrown Out Because of Their Skin Color’ 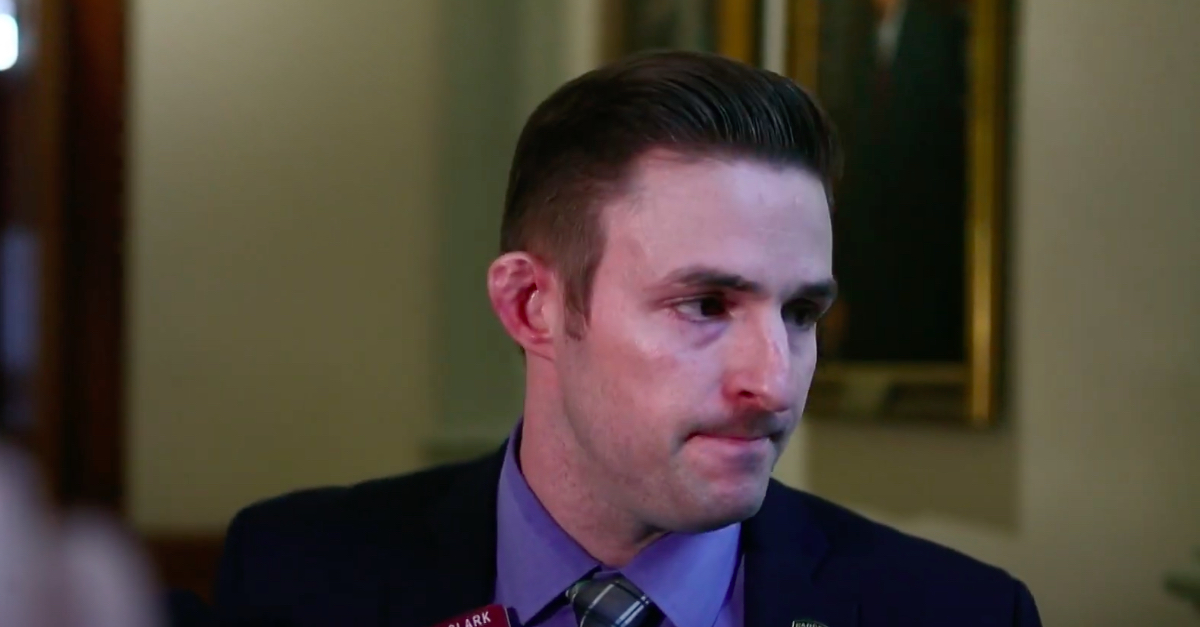 A Republican state lawmaker in Georgia who had to be removed from the House chamber for refusing to get a COVID-19 test on Tuesday compared his plight to that faced by the “Original 33,” the state’s first Black legislators who were expelled from the General Assembly in 1868 solely because they were Black.

Rep. David Clark (R-Buford) refused to exit the floor voluntarily when asked by House Speaker David Ralston (R-Fannin County) and was then escorted out of the chamber by a member of the Georgia State Patrol for deliberately violating House testing rules. The latest House guidelines call for members to be tested twice per week.

“We have a member of this body who has deliberate failed at all to be tested as we begin session, clearly in violation of our testing policy, jeopardizing the health of other members of this chamber. I’m going to ask that member to be as discreet as possible to quietly leave the chamber, unless you prefer it otherwise,” the Speaker said without mentioning Clark by name.

“I don’t know about ya’ll but I’ve been to too many funerals, and I’m getting tired of going to them,” he said sullenly, adding, “all we are trying to do is keep people from dying.”

Kaleb McMichen, Ralston’s director of communications, told the Atlanta Journal-Constitution that Clark had refused to be tested at all since the 2021 session began three weeks ago despite numerous calls from the Speaker asking him to comply with the safety rules. McMichen also said Clark was the only member of the chamber not to have been tested at all.

After exiting the floor, Clark claimed that he refused to take the tests because other Americans don’t have access to the same amount of testing as Georgia House members.

“I check my temperature when I come in, when I go in the chambers I wear my mask, I follow the protocols that they want in the chamber. But two tests a week is wrong, on my conscience, when teachers can’t get it and first responders can’t get it,” a maskless Clark said to reporters while still inside the building.

“You can’t just pick the rules and decide who comes in and who does not come in. Takes it back to right after the Civil War when you had 33 Blacks who got elected—Republicans—that get thrown out because of their skin color,” he went on.

Clark says he won’t get tested because first responders, healthcare workers, teachers and the elderly need to get tested more than him. @11AliveNews pic.twitter.com/CQQf5o3ke3

Clark was referring to the “Original 33,” the first Black elected officials in U.S. history who were thrown out of the General Assembly in the Reconstruction era following the Civil War. The expelled lawmakers organized a march protest the expulsion but were fired upon by newly deputized white Georgians when they entered the town square. The tragic incident, known as the Camilla Massacre, left 15 dead and more than 40 injured.

Georgia Governor Brian Kemp, a Republican, said lawmakers should follow the health guidelines in place for their protection.

“I think it’s incumbent on everyone in the building, whether you’re a legislator, whether you’re working in the executive branch, member of the media, the general public, we all need to follow the guidance and best practices to keep you safe, but also to keep others safe from you, if you happen to be infected and you’re asymptomatic and for some reason that hasn’t been caught,” he said during a Tuesday press conference.