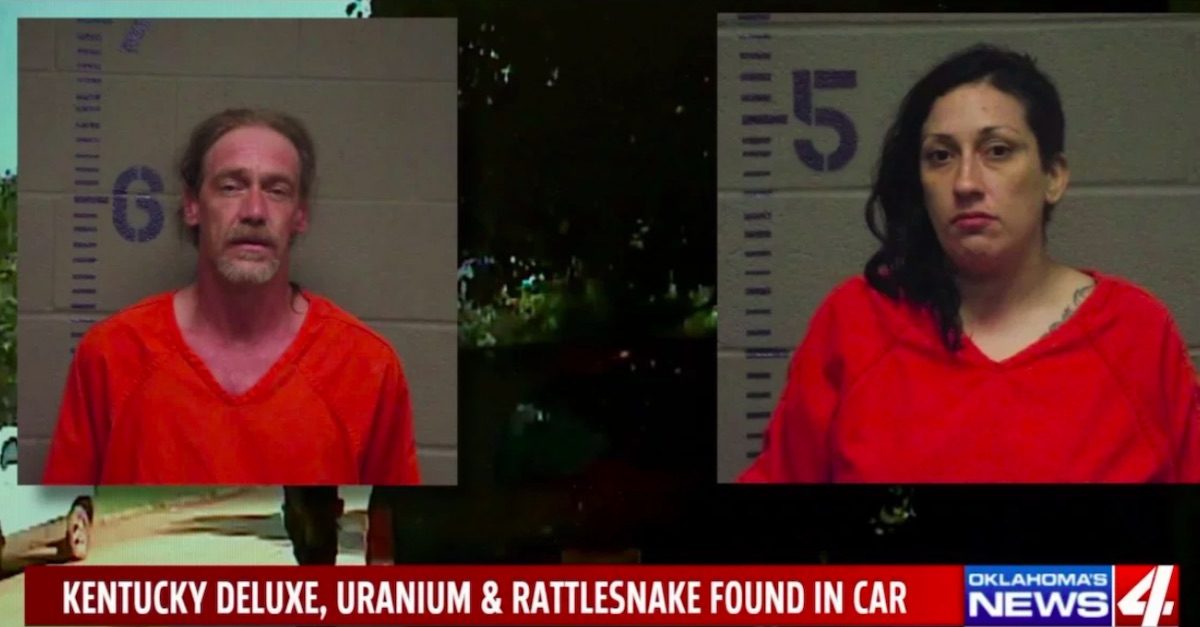 Authorities in Guthrie, Oklahoma arrested two people after a traffic stop of a stolen car with expired tags revealed the two occupants had an open bottle of Kentucky Deluxe Whiskey, a pistol, a timber rattlesnake, and radioactive uranium.

The vehicle’s driver, Stephen Jennings, was accompanied by Rachael Rivera when they were stopped by officers at approximately 11 a.m. in the morning last month. Jennings has been charged with possession of a stolen vehicle, transporting an open container of liquor, operating a vehicle with a suspended license, and failure to carry security verification form. Rivera was charged with possession of a firearm after a former felony conviction.

In bodycam footage posted by NBC News affiliate KFOR, a shocked officer is shown spotting the giant reptilian passenger in the back seat and exclaiming, “That sucker is huge.”

Uranium, a rattlesnake, and an open bottle of Kentucky Deluxe found after police pulled over a couple in a stolen vehicle in Guthrie. @kfor pic.twitter.com/6bh4MUuHcO

Guthrie Police Sgt. Anthony Gibbs said, “There’s quite a few unanswered questions. So now he’s got a rattlesnake, a stolen vehicle, firearm, and somebody under arrest.”

A further search of the vehicle uncovered a canister of radioactive powdered uranium. Though police are currently investigating, they have not yet been able to figure out what the two were planning on doing with the substance.

“When that happens of course, we call in a company that deals with that specifically and it’s taken safely into possession. The uranium is the wild card in that situation,” Gibbs said.

While charges pertaining to the possession of radioactive uranium may still be pending, Gibbs said that Jennings will not face any charges related to the timber rattlesnake, as he possessed a valid lifetime hunting and fishing license.

“It happens to be rattlesnake season at the time, so he can be in possession of this rattlesnake,” Gibbs said.

The timber rattlesnake is one of the deadliest snakes in the nation due to the neurotoxins in their venom which can cause muscle necrosis and internal bleeding.