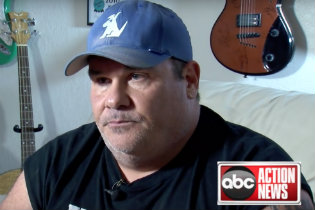 If you’re not a Florida resident and you know the name Bubba the Love Sponge Clem (his legal name), you likely heard it in relation to the Hulk Hogan/Gawker lawsuit. Clem was Hogan’s best friend, arranged a liaison with his wife and Hogan, and videotaped it without Hogan’s permission. It’s far from the only scandal he’s been part of: One scheme wasn’t fully adjudicated until Thursday when two of his three lawyers, Adam Filthaut and Robert Adams, were disbarred for arranging to have opposing counsel charged with drunk driving (The third lawyer, Stephen Diaco, had already been disbarred in January (full report here).

This all goes back to 2013, a lawsuit was filed against Clem by rival radio personality Todd “M.J.” Schnitt. According to the disbarment documents, the lawsuit was “hotly contested” and had been going on for five years when it went to trial. On the evening of January 23rd of that year, Schnitt’s lawyers, Phillip Campbell and Jonathan Ellis, went to nearby Malio’s Steakhouse for dinner. Adams’ paralegal, Melissa Personius, happened to be sitting at the bar, and called him to say she spotted opposing counsel. Instead of leaving, she stayed, while Flithaut called a friend at the Tampa Police Department, Sgt. Ray Fernandez, to tell him that Campbell was drinking and might drive drunk…without saying he was opposing counsel.

Let’s go to the disbarment documents to explain what happened next:

Upon returning to Malio’s, Personius and her friend took a seat next to Campbell at the bar. Personius told Campbell, Ellis, and another attorney present that she was a paralegal but lied about where she was employed. Personius openly and obviously flirted with Campbell, encouraged him to drink, and bought him drinks. All the while, without Campbell’s knowledge, communications continued among Respondents, Personius, and Fernandez. Personius kept Respondents informed about what was transpiring with Campbell inside Malio’s. Fernandez assigned another officer to stake out Malio’s to see if Campbell would drive while intoxicated.

They all left at some point around 9:30 to 9:45 p.m. Campbell had walked to the restaurant and intended to walk home, offering to call Personius a cab before he left. She refused the offer, expressing concern about her cab being in valet parking and whether it could be left there overnight. From there:

He took her valet ticket, had the car brought up, and confirmed with the valet that it could be left overnight. She then refused to leave her car and insisted that it needed to be moved to a secure public parking lot where she could have access to it. He tried to convince her to leave the car, but she insisted that it had to be moved. Out of frustration, he agreed to move the car to a lot near his apartment building and call her a cab from there.

Bad idea. Fernandez pulled them over a short time later and arrested Campbell for Driving Under the Influence. After the arrest,Personius called another attorney at the firm, who was able to get her car home for her. Disco lambasted Campbell to the local media the next day, and on top of that, he and his co-counsel had gained possession of his “trial bag.” Oh, and the investigation revealed that, two months earlier, there was “a previous attempt to have Campbell arrested for DUI by Filthaut and his friend Sergeant Fernandez.” Fernandez was fired from all of this.

Schnitt and his wife ended up not paying their lawyers and suing them for malpractice, but lost when the case went to trial earlier this year. The case made headlines when Bubba Clem testified on Schnitt’s behalf, just a few weeks after he refused to testify in the Hogan-Gawker trial.