Police Chief Promises to Resign After Being Linked to Racist Websites 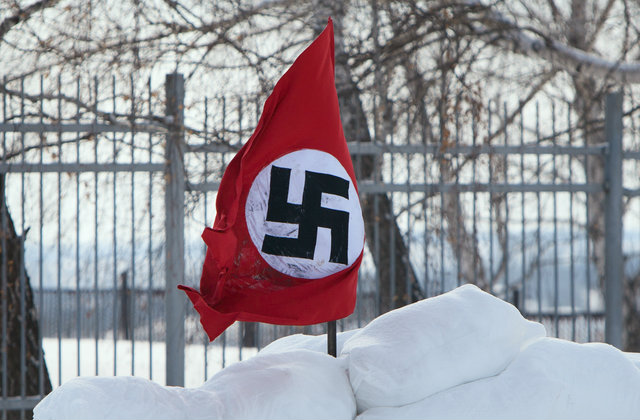 A small town police chief is stepping down after he was linked to two white supremacist, neo-Nazi websites. Oklahoma man Bart Alsbrook told the Tulsa World on Saturday that he will resign, but denies the allegations against him.

It all started when The Southern Poverty Law Center started a “hate map” in the wake of the violent August 12 white supremacist rally in Charlottesville, Virginia. The organization meant this as a tool to keep tabs on hate groups throughout the U.S. Well, outlet KXII looked at the local ISD Records, run out of Denison, Texas, near the Oklahoma border. According to their report, it made a business around racist music by bands like The Klansmen, and albums like “Hitler Was Right.”

They tracked down the company’s certificate of ownership to a local courthouse. The name on the document: Bart Alsbrook. Incidentally, one Bart Alsbrook, a reserve officer, was made interim police chief of nearby Colbert, Oklahoma just last Tuesday, the town’s third top cop this year. As the outlet mentioned, the SPLC named a Bart Alsbrook as the USA Texas coordinator for the neo-Nazi skinhead group Blood & Honour, and the man behind racist video company NS88. (ISD Records had a banner that read “The Voice of Blood & Honour.”)

When KXII reached out to Chief Alsbrook for comment, he denied being behind ISD Records and NS88. He claimed skinheads stole his wallet after a fight at a heavy metal concert back in the 1990s. He was charged with attempted murder in that same decade, but told the outlet that he was misidentified as the suspect. The case was later dropped.

KXII could find no other person in the United States named Bart Alsbrook. The websites for both ISD Records and NS88 went offline hours after the outlet spoke to this soon-to-be former police chief.

In a text message to the Tulsa World on Saturday, Alsbrook said racists were using his name to smear him.

“Someone has been using my name for years on the Internet in regards to racist topics. It’s not me, rather someone who has hijacked my name due to my combativeness and rejection to white power skinheads who were always coming to the heavy metal shows, starting fights and messing up our scene,” he said.

The Tulsa World changed some of the text’s spelling and punctuation for clarity.

Alsbrook said neo-Nazis in Dallas have been using his name since the mid-90s.

“We hate each other,” he said. “They use my name in all sorts of things.”

[Image via Shmelev Dmitriy and Shutterstock]