‘Neo-Confederate’ from South Korea Convicted of Falsely Claiming He Was U.S. Citizen to Get Firearms | Law & Crime

‘Neo-Confederate’ from South Korea Convicted of Falsely Claiming He Was U.S. Citizen to Get Firearms 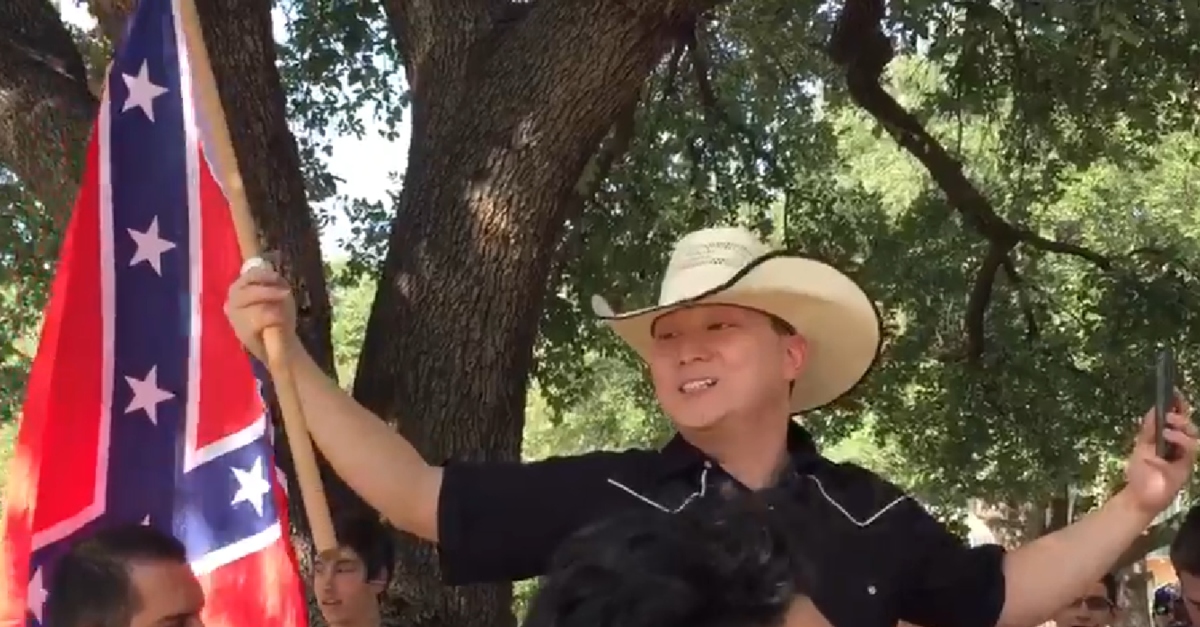 Heon “Hank” Jong Yoo, a self-described “Neo-Confederate,” was found guilty on Thursday for firearms charges. His trial lasted three days, according to a Department of Justice news release.

Prosecutors say that during seven firearms transactions, he falsely claimed he to be a U.S. citizen. Not true. He’s a legal permanent resident from South Korea. Authorities claim that some of these transactions involved semiautomatic weapons. Yoo allegedly did this after being involuntarily committed to a New Jersey mental institution in 2013 and 2015. Prosecutors said he had multiple firearms, ammo, and related accessories.

Joseph D. Brown, U.S. Attorney for the District Court for the Eastern District of Texas, suggested that the defendant’s behavior could have escalated to a bloody end.

“This case was a great example of federal, state, and local law enforcement working together to stop a threat that really could have had tragic results,” he said. “Yoo was becoming increasingly aggressive in his behavior, and there were multiple schools where people were extremely concerned about what he was going to do. In addition, he had weapons and a history of mental health problems.  These situations often end badly, and it was good that law enforcement worked together to get him off the streets as soon as they did.”

Yoo was a local character.

“I’m proud to be prejudiced,” he said in a North Texas Daily report from  2016. “I was made in America.” He described himself as a “Neo-Confederate.”

The outlet reported he started arguing with students outside a building at the University of North Texas. He intended to aggravated “as many liberals as possible,” he said. Yoo said he was banned from four universities for his views, and for “disagreeing and calling a feminist professor a ‘fat fuck.'”

“We have to take our country back,” said Yoo. “The only rule of government is to keep people from killing each other and securing our borders and invading other countries.” He reportedly also supported, in his own words, “drugs, guns, gay marriage–everything.”

Yoo made his views known on social media, but his accounts, including his YouTube “Lone Star to Arms,” is now deleted. Footage preserved by other users shows him ranting about Black Lives Matter, and saying that the “South shall rise again.” One video is titled “Sieg Heil Taylor Swift.”

His criminal defense didn’t go smoothly. Yoo wrote a federal judge in July that he wanted to be released from jail because his lawyer had a “political motive to get me convicted,” and did not give him the indictment, according to the letter obtained by The Longview News-Journal.

Yoo claimed the defense lawyer Mick Mickelsen “told me ‘You have poor judgement [sic]. Trump hates you because you are an immigrant’ because I am a Trump supporter. He is acting more like a prosecutor rather than a zealous advocate.

Mickelsen declined to comment on the specifics of the allegation, only to say that his then-client “has an interesting personality.”

Yoo ended up defending himself at trial. Prosecutors says he faces a maximum of five years in federal prison for each of the seven counts of false statements, and 10 years for one count of unlawful possession by a prohibited person.