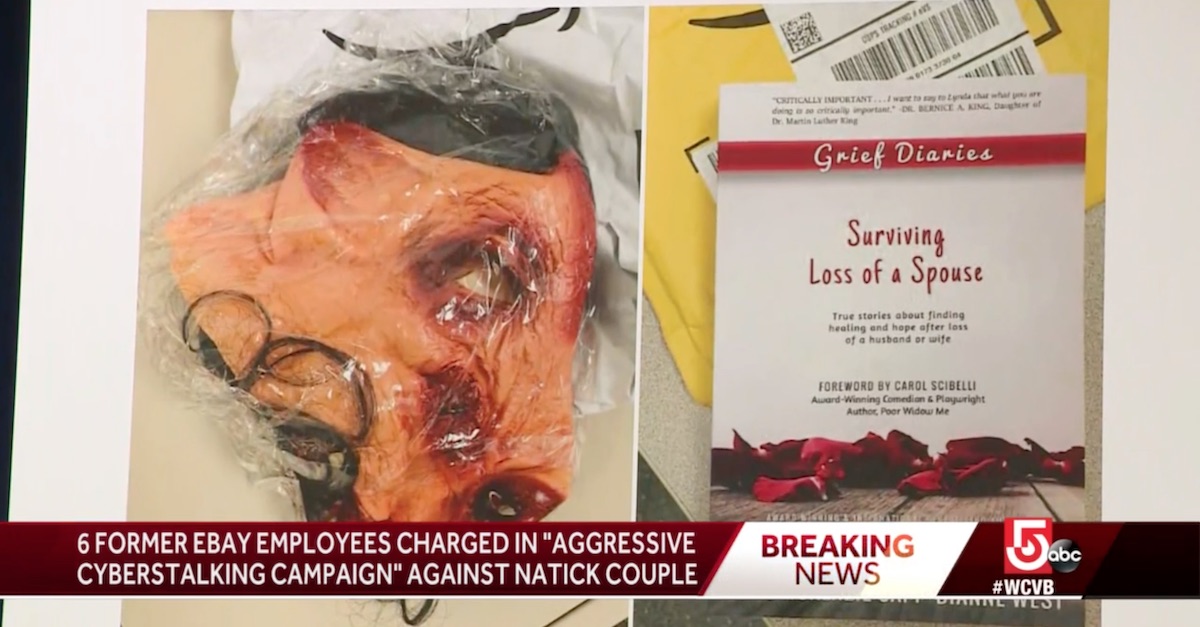 The U.S. Attorney’s Office for the District of Massachusetts announced federal charges against six former eBay employees who allegedly perpetrated a “disturbing” harassment campaign against a blogger and her husband, the “editor and publisher of a newsletter” which was critical of the company.

According to the charging documents, the victims of the cyberstalking campaign were a Natick couple who are the editor and publisher of an online newsletter that covers ecommerce companies, including eBay, a multinational ecommerce business that offers platforms for consumer-to-consumer and business-to-consumer transactions. Members of the executive leadership team at eBay followed the newsletter’s posts, often taking issue with its content and the anonymous comments underneath the editor’s stories.

It is alleged that in August 2019, after the newsletter published an article about litigation involving eBay, two members of eBay’s executive leadership team sent or forwarded text messages suggesting that it was time to “take down” the newsletter’s editor.

The defendants allegedly engaged in a “three-part” harassment campaign that involved sending “disturbing deliveries to the victims’ home, including a preserved fetal pig, a bloody pig Halloween mask, a funeral wreath, a book on surviving the loss of a spouse, and pornography – the last of these addressed to the newsletter’s publisher but sent to his neighbors’ homes.”

Lelling said that live spiders and cockroaches were also sent to the victims.

The second and third phases of the campaign allegedly included “doxing” and covert surveillance. Again, the DOJ:

As part of the second phase of the campaign, some of the defendants allegedly sent private Twitter messages and public tweets criticizing the newsletter’s content and threatening to visit the victims in Natick. The documents allege that Baugh, Gilbert, Popp and another eBay security employee planned these messages to become increasingly disturbing, culminating with “doxing” the victims (i.e., publishing their home address). It is alleged that the very same group intended then to have Gilbert, a former Santa Clara police captain, approach the victims with an offer to help stop the harassment that the defendants were secretly causing, in an effort to promote good will towards eBay, generate more favorable coverage in the newsletter, and identify the individuals behind the anonymous comments.

The third phase of the campaign allegedly involved covertly surveilling the victims in their home and community. According to the complaint, Harville and Zea registered for a software development conference to explain their trip to Boston on Aug. 15, 2019. Baugh, Harville, and Zea (and later Popp) allegedly drove to the victims’ home in Natick several times, with Harville and Baugh intending at one point to break into the victims’ garage and install a GPS tracking device on their car. As protection in the event they were stopped by local police, Baugh and Harville allegedly carried false documents purporting to show that they were investigating the victims as “Persons of Interest” who had threatened eBay executives. The victims spotted the surveillance, however, and notified the Natick police, who began to investigate. The police learned that Zea had rented one of the cars used by the defendants and reached out to eBay for assistance.

The defendants are also accused of lying to police and deleting digital evidence of their involvement in the alleged cyberstalking conspiracy after becoming aware of an ongoing investigation.

eBay released a statement in response to the news.

“Neither the Company nor any current eBay employee was indicted. In order to preserve the integrity of the government’s investigation, eBay did not previously communicate about this matter. In light of today’s public announcement by the government, eBay is now addressing this matter publicly,” the company began. “eBay was notified by law enforcement in August 2019 of suspicious actions by its security personnel toward a blogger, who writes about the Company, and her husband. eBay immediately launched a comprehensive investigation, which was conducted with the assistance of outside legal counsel, Morgan, Lewis & Bockius LLP. As a result of the investigation, eBay terminated all involved employees, including the Company’s former Chief Communications Officer, in September 2019.”

Baugh and Harville were arrested on Monday.

The charges, upon conviction, are punishable by up to five years behind bars. The accused could also be fined up to $250,000.