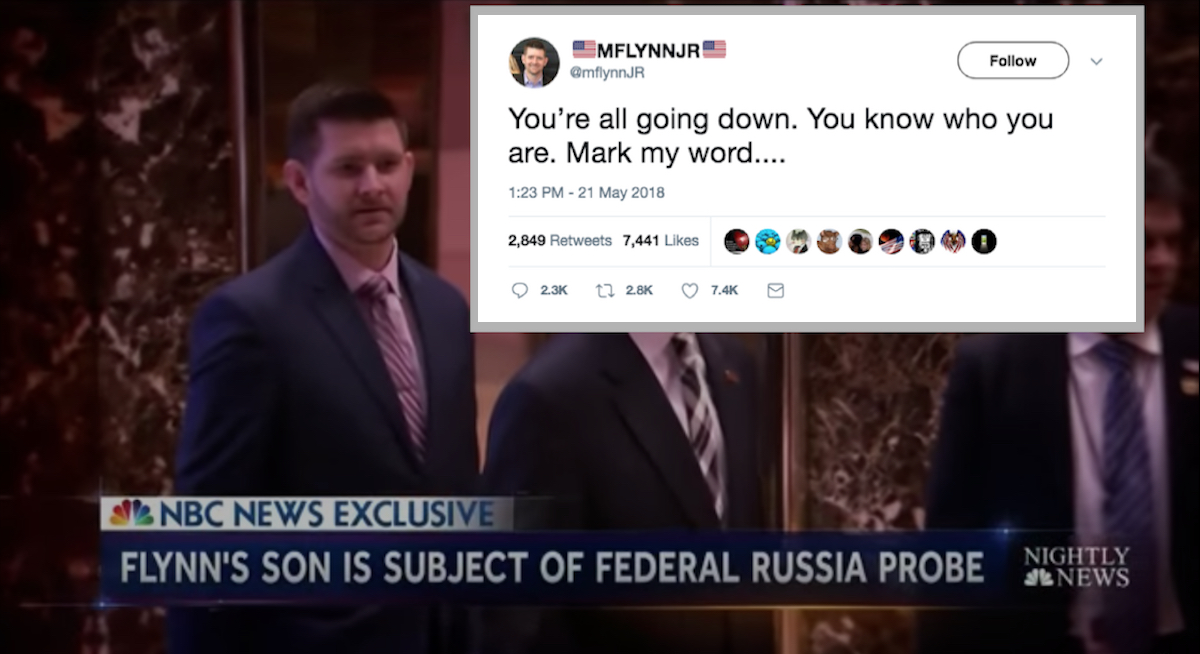 You’re all going down. You know who you are. Mark my word….[sic]

You’re all going down. You know who you are. Mark my word….

To whom is Flynn offering the burning salve of one-word prophecy?

A brief scan of his most recent and pinned Tweets contains some easily-discernible hints. At the top of the younger Flynn’s page is a tweet linking to an article in LifeZette, an online publication of sorts run by far-right conservative commentator Laura Ingraham.

The article, published on May 15, purports to show why special counsel Robert Mueller‘s Russiagate investigation is “unraveling” and frames that investigation as a “Conspiracy” against President Donald Trump. Quoted in the article is former federal prosecutor Joseph diGenova, who says, “This is without a doubt the greatest political scandal in American history.”

The tweet immediately preceding Flynn Jr.’s trebly-cliched prediction is a spiteful denunciation of Starbucks which associates the multi-billion dollar company with “the left” before mocking the idea that homeless people might use the corporate coffee shop chain to sleep in. The three tweets before that contain two references to Google’s alleged censorship of conservative views and one reference to Barack Obama hating America.

Very on brand for Flynn, but not very helpful here.

Over the past couple of days however, Flynn Jr.’s Twitter feed makes reference to: (1) a looming Inspector General report that has the “Deep State” running scared; (2) Trump’s call for an investigation of the FBI’s alleged electioneering-by-surveillance; (3) various criticisms of Mueller’s Russiagate investigation from the extreme right; (4) a series of attacks on John Brennan over his rhetorical criticism of Trump; (5) an accusation that “the left” is panicking over Trump’s planned FBI review; and (6) sundry and voluble cheerleading for Trump in general.