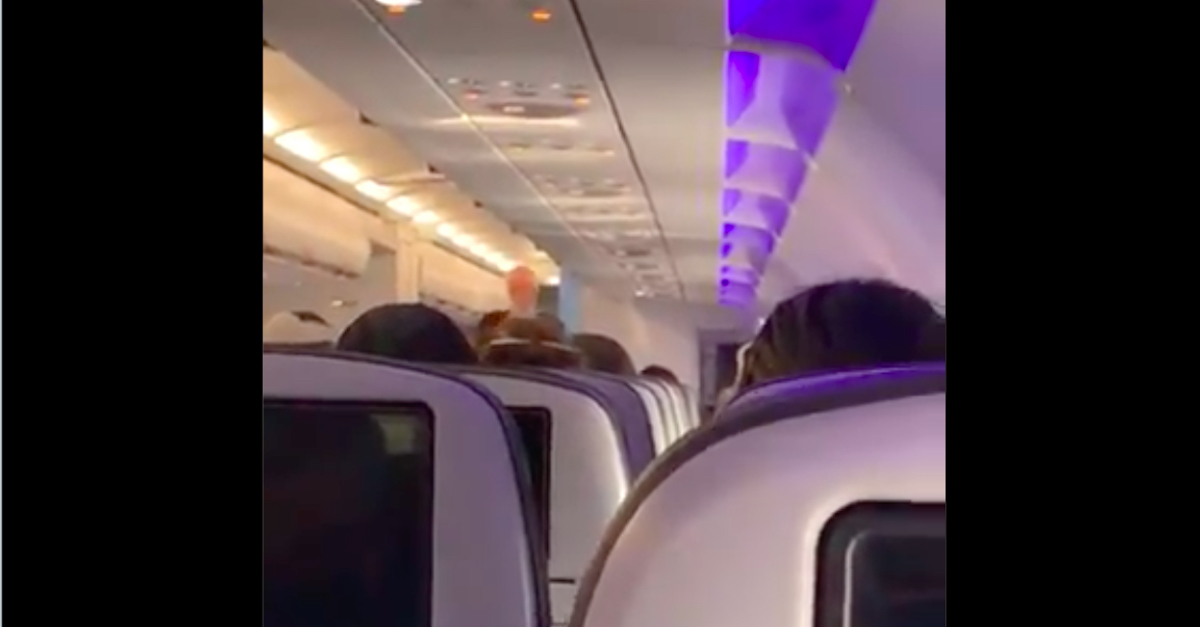 A cross-country JetBlue flight bound for California was forced to make an unscheduled landing in Minnesota Sunday after an unruly passenger who refused to wear a mask was observed openly snorting a white substance, wielding a plastic knife, and groping a female passenger, among other things, ABC7 News reported Monday.

According to the report, a male passenger on the flight from JFK Airport in New York to San Francisco International Airport immediately began making inappropriate comments to female passengers and was yelling racial slurs during the boarding process. His disruptive behavior only escalated from there, and was so unbearable that passengers audibly cheered when a member of the flight crew announced that the plane was being diverted to make an unscheduled landing at Minneapolis-St. Paul International.

Upon landing, the passenger, a 42-year-old from Mechanicville, New York, was arrested by police officers and FBI agents on probable charges of fifth-degree drug possession, according to a Bring Me The News report. Jeff Lea, a spokesperson for the Minneapolis airport told the outlet that “the passenger was removed from the aircraft at MSP and detained,” and confirmed that the Hennepin County Attorney’s Office was considering filing formal charges.

Matt Kawashima, a passenger on the flight, used his phone to record a JetBlue employee describing the man’s behavior to the cabin before announcing the unscheduled stop.

The employee said that as he was coming out to make the announcement, the male passenger was once again in the bathroom, and that members of the flight crew who were cleaning the area around his seat discovered a “bag filled with a white substance” that they confiscated and brought to the front of the plane.

Uhhh my @JetBlue flight JFK-SFO just got diverted to MSP because an anti-masker was snorting coke in the bathroom and sexually harassing another passenger… props for to the crew for dealing with this maniac. @OneMileataTime @garyleff pic.twitter.com/CABOec8P3j

ABC7 interviewed several witnesses who said the malodorous man had a full bag of white powder that he was seen snorting and made several trips to the bathroom in a short period of time.

“So he kept walking back and forth to the bathroom, he had no shoes on, and he smelled awful,” passenger Delaney Washington told the outlet.

Another passenger, Bob McKanzie, said that when the man got to his seat, he “started yelling that he wanted a white Porsche,” adding, “I don’t know who he was talking to but that’s what he was saying.”

Some Twitter users speculated that the man may have actually been making a reference to “white horse,” which is a drug slang code word for cocaine, according to the Drug Enforcement Administration (DEA).

In response to an inquiry from Law&Crime, a JetBlue spokesperson issued the following statement:

On Sunday, JetBlue flight 915 with scheduled service from New York’s JFK Airport to San Francisco, was forced to divert to Minneapolis after a customer on board began acting erratically and aggressively toward crewmembers and other customers. The flight was met by law enforcement, the customer was removed and the flight continued on to San Francisco. Safety is JetBlue’s first priority, and we appreciate our crewmembers’ response and our customers’ patience during this incident.