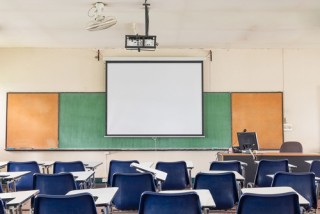 Usually I’m proud to say that I’m from New Jersey. Today might be different, because it apparently took roughly a year and a half, nearly $8,000 in state legal fees, and a battle that went to a school superintendent and ultimately the Commissioner of Education’s office just to determine that a student calling a classmate “an idiot” for being a vegetarian isn’t okay, as first reported by the Asbury Park Press.

It all started way back in October 2014 in Montgomery, New Jersey, when, according to court records — because there are actually court records for this — a sixth grader, referred to as C.C., told a vegetarian classmate, K.S., that “he should eat meat because he’d be smarter and have bigger brains.,” and “vegetarians are idiots.”

A probe was then underway, as the school district’s anti-bullying specialist — which is an actual position, apparently — looked into whether C.C.’s comments met the state law’s definition of bullying — because state law apparently has a set definition and a commission for bullying. That definition includes “any gesture, any written, verbal or physical act” on school property “that is reasonably perceived as being motivated” by a distinguishing characteristic. The specialist, guidance counselor Lesley Haas, decided that yes, being a vegetarian qualifies as a distinguishing characteristic. Superintendent Stephanie Gartenburg agreed with that decision and gave C.C. five days of lunchtime detention.

C.C.’s parent then requested a hearing before the school board, where their attorney was able to question Haas. The school board upheld the decision, but C.C.’s family didn’t let it end there. They appealed the decision to the Commissioner of Education’s office. The case went before an administrative law judge who upheld the decision, citing case law about similar situations, like when it was decided that making fun of a kid for being bad at basketball was considered bullying because it targeted a student’s height, intelligence, and athletic ability. Give me a break.

C.C.’s family’s attorney told the Press that they don’t plan on appealing the case further. I’d call them quitters, but I wouldn’t want to be guilty of bullying.

To be clear, I’m certainly anti-bullying, but I’m also anti-ridiculous bureaucracy. How in the world did this matter last longer than a day? When I was in sixth grade if a kid made fun of a classmate, the school could give him detention, and that was the end of it. There were no questions as to whether a remark qualified as “bullying.” If you were a jerk, you got punished. That being said, five days of lunch detention seems excessive if it was a one-time thing, so I understand why the kid’s family fought the punishment. But in my day (this case has turned me into a cranky old man), you’d have your parents talk to the principal, and that was that. No hearings, no appeals, no judges, no thousands of dollars in school district legal fees at taxpayers’ expense. Maybe just a compromise for a punishment that fits the crime. Like two days’ lunch detention — but he can only eat salads.