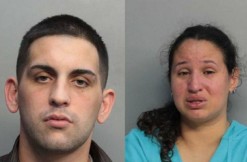 Weirdest motive for a crime: A couple in Doral, Florida allegedly beat up the man’s grandmother after she wouldn’t drive them to place where they could have sex. Michael Rubio, 25, and Jacquelyn Carrasquillo, 27, were arrested Thursday, according to an affidavit obtained by ABC 10.

Anyway, here’s the claim: Grandmother was driving her car, and the others were passengers. It’s unclear how the subject of sex came up, but it came up. Cue argument because for some reason, the grandmother had a problem driving her grandson to a place where he could make love.

Grandmother stopped the car, and stepped out. This reportedly wouldn’t do for the couple, who got out too, allegedly attacked her, and threw her to the ground. She sustained lacerations to her face before she ran back to her home, and they drove away, police said.

The couple faces charges of battery to a person 65 or older. The state of Florida does not look kindly on that, so they each face at least 3 years in prison, and a possible fine of up to $10,000.