GOP Congressional Candidate: the Holocaust is an ‘Absolute Fabricated Lie’ 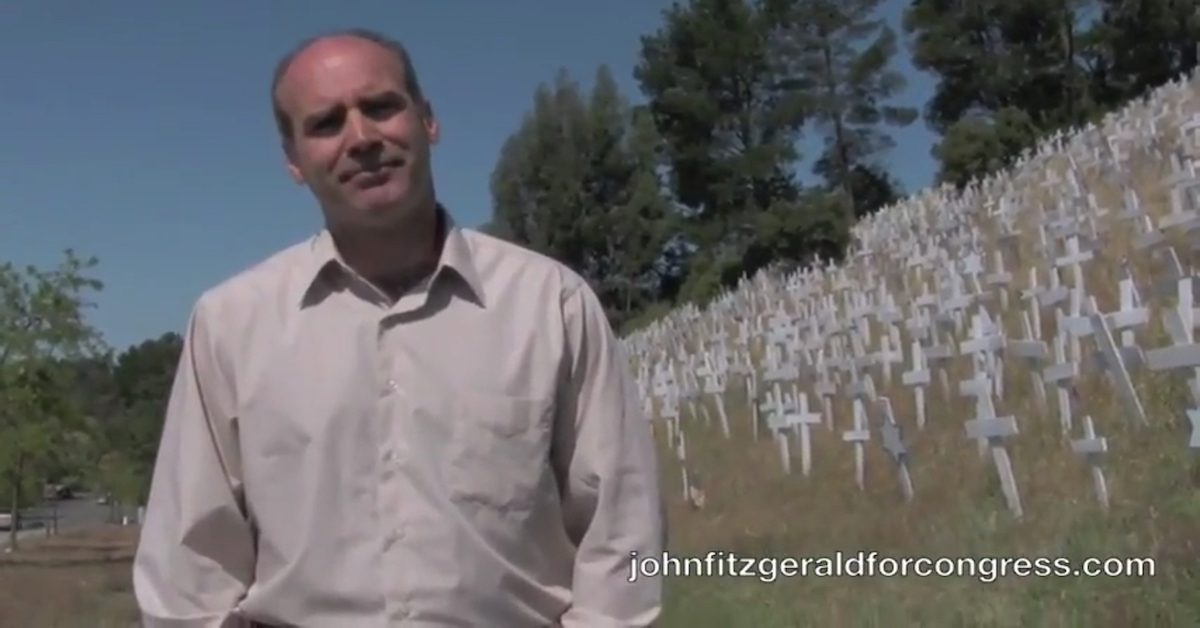 Republican congressional candidate John Fitzgerald is on a mission — and that mission is expressly anti-Semitic.

After securing the GOP nomination for California’s 11th Congressional District, Fitzgerald has been barnstorming the neo-Nazi podcast circuit and promoting the false and malicious idea that the Holocaust never happened.

On June 23, Fitzgerald appeared on The Realist Report with host John Friend. Friend is an avowed neo-Nazi who once said Adolf Hitler was “the greatest thing that’s happened to Western civilization.” During that interview, Fitzgerald whinged about fictitious “Jewish control and supremacy.” Near the end of the segment, Fitzgerald opined about how it was “ironic” that he was living in the former home of an award-winning Holocaust researcher. He said (audio here):

This wasn’t Fitzgerald’s first (or last) foray into anti-Semitic conspiracy theorizing. On June 28, he appeared on The Andrew Carrington Hitchcock Show. Andrew Hitchcock has also made a career out of his anti-Semitism and has authored several Hitler puff pieces, according to Media Matters. On Hitchcock’s podcast, Fitzgerald explained the reason for his campaign (audio here). He said:

I’ve really gone on an extreme journey from the standard material that everybody believed to what is considered a very taboo subject, taking on the entire Holocaust narrative and realizing that everything we’ve been told about the Holocaust is a lie. So my entire campaign, for the most part, is about exposing this lie.

A look at Fitzgerald’s campaign website suggests the candidate is not exaggerating.

Rather than dealing with issues of local consequence in CA-11, Fitzgerald’s platform is a recitation of various right-wing conspiracy theories. On the site, Fitzgerald recently published a manifesto of sorts. Under the title of “Why Are Jews Pushing Mass-Immigration And Forced-Multiculturalism Throughout The U.S. And Europe?,” Fitzgerald writes:

I hope all of you ask yourselves why JEWS are primarily behind the push of multiculturalism, diversity and inclusiveness throughout the United States, Europe and other once predominantly white nations of the world and WHY many of our politicians allowing them to do so has led to rape and crime epidemics in its aftermath.

Fitzgerald is one of many GOP candidates running this year who have made their anti-Semitism and racism the focal points of their campaigns. In Illinois’ 3rd District, Republican Arthur Jones is running against Democrat Dan Lipinski. Jones is the former leader of the American Nazi Party; Illinois’ Republican Governor Bruce Rauner has resisted calls to endorse Lipinski.

In the race against Democratic incumbent Mark DeSaulnier, Fitzgerald is heavily favored to lose.