Court Rules Neo-Nazi Party Is Too Weak to Ban 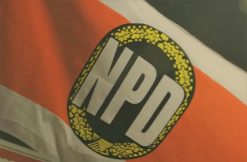 For decades, opponents have called the National Democratic Party of Germany a Neo-Nazi organization, and have been trying to get it banned. Germany’s highest court actually agreed on Tuesday. Almost. They said the group was bigoted and dangerous, but it was simply way too weak to outlaw.

The court acknowledged that the party, known in German as Nationaldemokratische Partei Deutschlands (NPD), is overtly nationalist, and not very friendly to immigrants.

“The NPD intends to replace the existing constitutional system with an authoritarian national state that adheres to the idea of an ethnically defined ‘people’s community’,” the court said, according to a Reuter’s report. The country’s intelligence community have called the group racist, anti-Semitic, and “revisionist.”

But the court ruled that it wouldn’t be legal to outlaw the group since they just didn’t have enough supporters to get them elected. The NPD only had just over 5,000 members in 2015, and it only got 1.3 percent of the vote in the 2013 national election—parties need at least 5 percent to sit in the parliament. They recently elected officials working out of the state parliament of Mecklenburg-Western Pomerania, but waning support changed that. Their last high-profile representative works out of the European Parliament.

The AfD wants a hardline immigrant policy, with one leader going as far as to say police should open fire “if necessary” to stop migrants from crossing the border. They have seats in 9 out of the 16 state parliaments, but none at the national level.

Had the court ruled against the NDP, it wouldn’t have been the first time the country banned a party, but it has been a while. West Germany did it twice: a Neo-Nazi party in 1952 and communists in 1956.