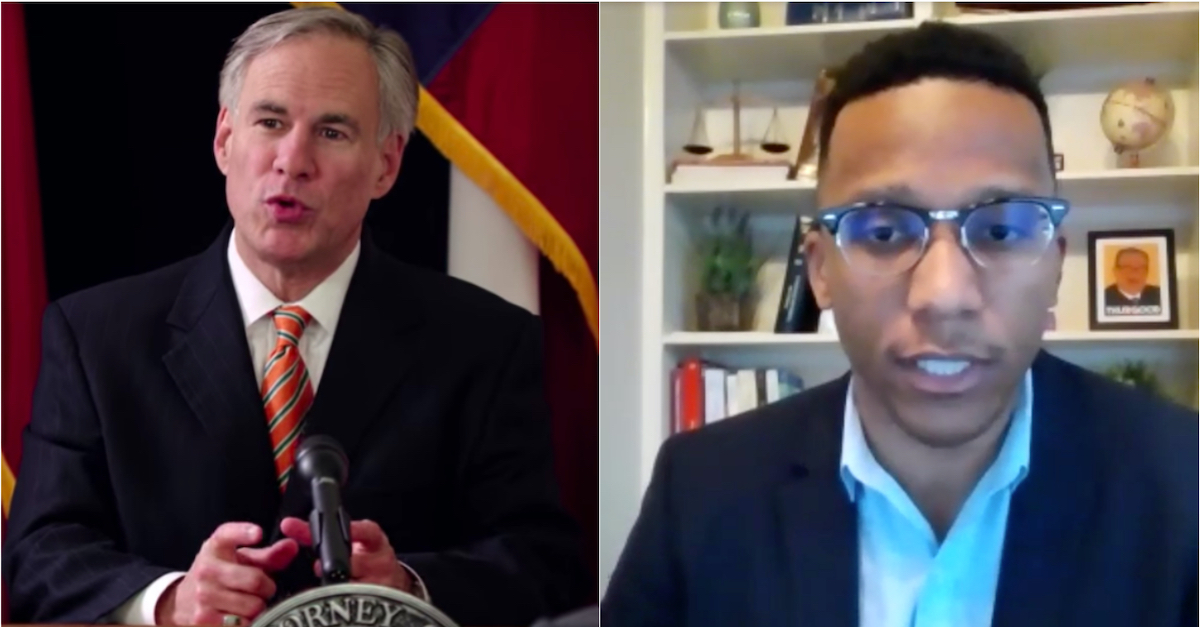 One day after being hit with a lawsuit accusing him of treating Texas like a “dictatorship,” Gov. Greg Abbott was slapped with a temporary restraining order on Friday blocking him from enforcing his order banning mask mandates in the Lone Star State’s largest county, according to that county’s top civil lawyer.

Harris County Attorney Christian Menefee (D) had accused the pro-Trump Republican of “harmful overreach,” and worse, in a blistering lawsuit filed on Thursday.

“The Legislature wrote the Disaster Act to give the Governor powers to effectively mitigate a disaster, but was careful to ensure a Governor could not slyly use a disaster to usurp and consolidate power in his office,” Menefee wrote in a 32-page petition on Thursday.

“The Governor is actively disregarding it and daring the Legislature and the Courts to allow him to convert the cherished limited government of Texas into a dictatorship,” the petition continues. “Fortunately, for the millions of Texans facing the COVID-19 pandemic and hoping their local leaders respond to the disaster the Governor has chosen to ignore, Texas still operates under the rule of law, not under the whims of a single person.”

In short order, Menefee reported that a judge in Travis County—home to the state’s capital of Austin—temporarily granted a restraining order forbidding Abbott from meddling with a mask mandate in Harris County, which is home to Houston. His office reported that a signed copy of the order would be made available later.

“While this decision is temporary, it’s a victory for residents in Harris County who are concerned about this public health crisis,” Menefee wrote in an email, celebrating the victory in a statement. “We need every tool at our disposal to stop the spread of COVID-19, including masks and other measures that are proven to slow the spread. It’s critical that we work swiftly to do as much as possible to protect those who cannot be vaccinated, like our young children heading to school and our immunocompromised.”

Responding to the allegations of the lawsuit, Abbott’s press secretary Renae Eze told Law&Crime that the argument that the governor overreached in his in his powers is “just plain misguided.”

“Under Chapter 418, the Governor has full authority to issue executive orders that have the full force and effect of law in response to a disaster. This health disaster has continued to change, and so should our response,” Eze wrote. “Texans have learned and mastered over the past year the safe practices to protect themselves and their loved ones from COVID, and do not need the government to tell them how to do so.”

“COVID-19 Is Ravaging Our Community”

“What’s important here is, Harris County government’s changing,” Menefee said in an interview for Law&Crime’s podcast “Objections” earlier this year, responding to outages that afflicted millions of Texans. “Our county judge, who is the chief executive of the county and the head of our legislative body, is a Latina, who just turned 30 a few days ago.”

He had been referring to Judge Lina Hidalgo, who—despite her title—does not have any judicial branch role but functions as the county’s chief executive.

In this and other actions, both Menefee and Hidalgo aggressively backed emergency measures to keep the COVID-19 pandemic under control, which Abbott habitually sought to override from local leaders at the state level. The governor overrode a prior mask order last year, in a prelude to Abbott’s current order: GA-38.

When rolling out the order on Wednesday, Gov. Abbott described his prohibition on mask mandate as an issue of “personal responsibility.”

“Under Executive Order GA-38, no governmental entity can require or mandate the wearing of masks,” Abbott wrote in a statement. “The path forward relies on personal responsibility—not government mandates. The State of Texas will continue to vigorously fight the temporary restraining order to protect the rights and freedoms of all Texans.”

His press secretary echoed that theme in response to the lawsuit.

“Removing government mandates, however, does not end personal responsibility or the importance of caring for family members, friends, and your community,” Eze wrote. “Vaccines are the most effective defense against contracting COVID and becoming seriously ill, and we continue to urge all eligible Texans to get the vaccine. The COVID vaccine will always remain voluntary and never forced in Texas.”

Menefee’s petition turns this framing on its head, describing the issue as one of local autonomy.

“Texas is not, and has never been, a dictatorship,” the blistering petition states. “The Governor serves under the authority granted to him by the Texas Constitution and the statutes of the legislature, and nothing more.”

The Harris County Attorney filed his petition in the District Court of Travis County, Texas, home to the state’s capital of Austin.

Update—Aug. 13 at 3:53 p.m. Eastern Time: This story has been updated to include Gov. Abbott’s reaction to the lawsuit.

Update—Aug. 13 at 5:14 p.m. Eastern Time: Once a judge blocked the governor’s order, this story was updated a second time to report the development with an up-to-date headline.

Learn more about the Harris County Attorney in this interview with Menefee for Law&Crime’s podcast, “Objections”: