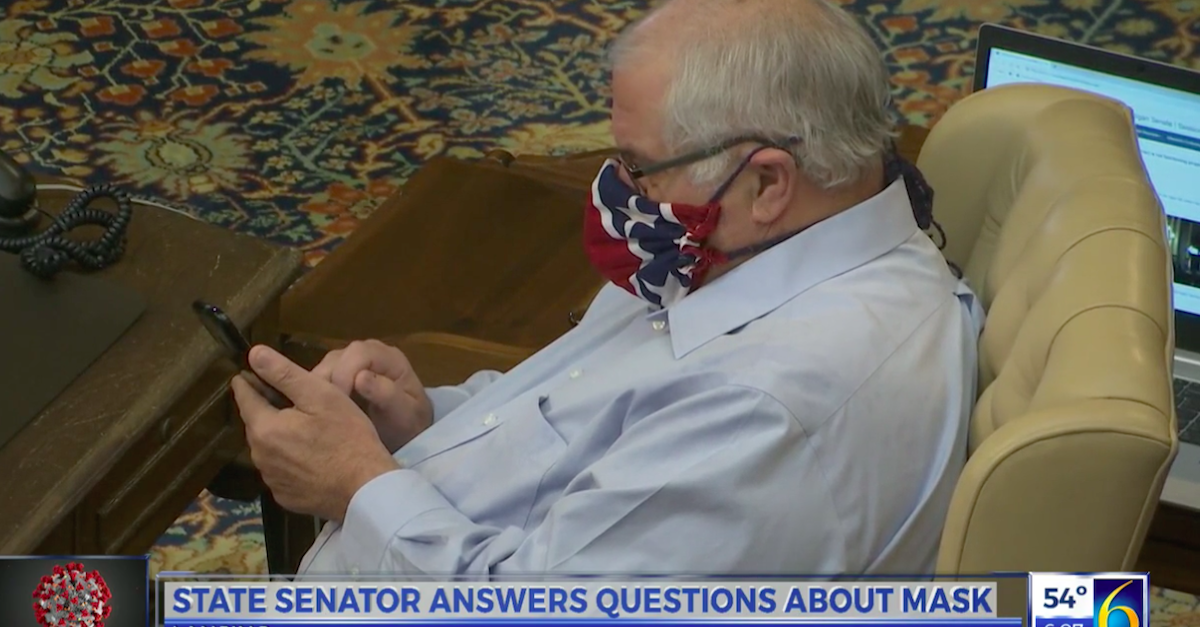 A Michigan state senator turned heads on Friday when he took part in a vote at the capitol while wearing a face mask that appeared to be fashioned after the confederate flag.

State Senator Dale Zorn initially denied that his mask depicted the Confederate flag before issuing an apology on Saturday.

My actions were an error in judgment for which there are no excuses and I will learn from this episode.

“I’m sorry for my choice of pattern on the face mask I wore yesterday on the Senate floor,” Zorn wrote Saturday on his official Twitter account. “I did not intend to offend anyone; however, I realize that I did, and for that I am sorry. Those who know me best know that I do not support the things this pattern represents. My actions were an error in judgment for which there are no excuses and I will learn from this episode.

Just one day prior, however, Zorn told local news outlet WLNS that after his wife made the mask for him he told her it was likely to “raise some eyebrows.”

“It wasn’t a confederate flag, it was a mask that my wife made for me and she wanted me to wear it,” Zorn said Friday to reporter Kiyerra Lake. “I told my wife it probably will raise some eyebrows, but it was not a confederate flag.”

Despite his insistence, Zorn on Friday also defended the Confederate flag as “part of our national history.”

“Even if it was a Confederate flag, you know, we should be talking about teaching our national history in schools,” Zorn said. “And that’s part of our national history and it’s something we can’t just throw away because it is part of our history. And if we want to make sure that the atrocities that happened during that time doesn’t happen again, we should be teaching it. Our kids should know what that flag stands for.”

Asked by Lake to explain what “that flag” stands for, Zorn paused before saying, “the confederacy.” The Michigan state senator also claimed that the mask looked more like the state flag of Kentucky or Tennessee than the Confederate flag.