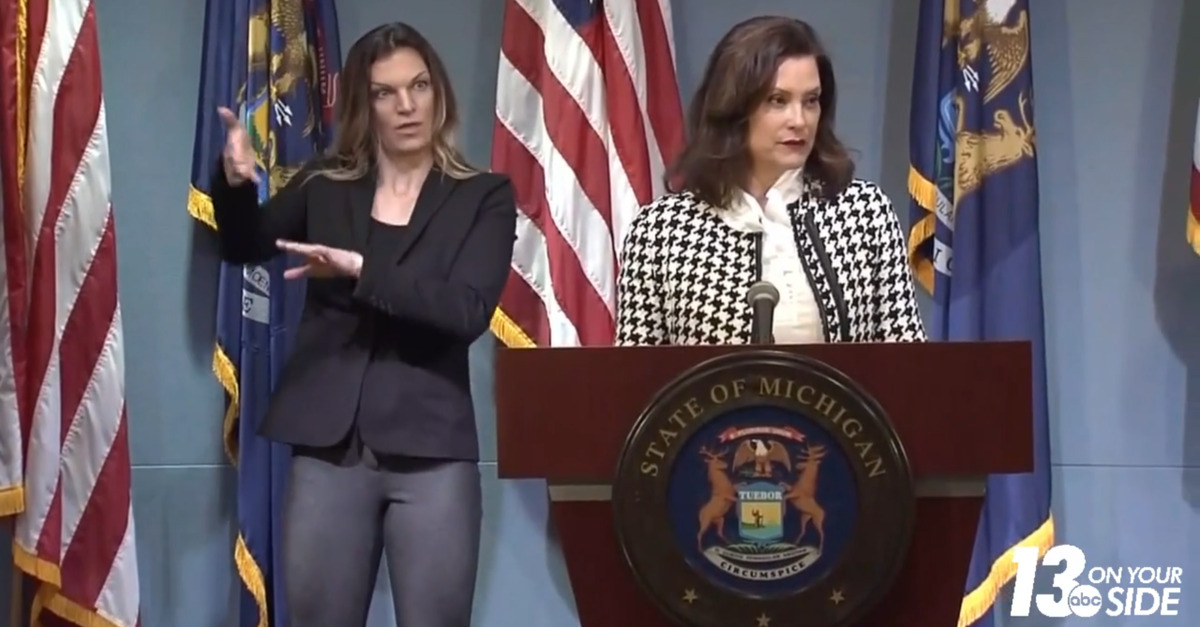 Michigan’s Democratic Governor Gretchen Whitmer is under fire after her husband reportedly tried to get preferential treatment from a dock company by citing his marital status. The controversy flared up over the long Memorial Day weekend, enraging some Michiganders and good government advocates wary of nepotism amidst the ongoing novel Coronavirus (COVID-19) pandemic. Now, Whitmer insists her husband was simply joking. And badly at that.

“Knowing it wouldn’t make a difference, he jokingly asked if being married to me might move him up,” Whitmer said during a press conference on Tuesday afternoon.”He regrets it. I wish it wouldn’t have happened. And that’s really all we have to say about it.”

According to The Detroit News, Marc Mallory phoned NorthShore Dock LLC in Kewadin, Michigan, near Traverse City last Thursday, May 21, and asked for his boat to be placed in the water prior to the holiday weekend when a massive onrush of visitors was almost certain to occur.

“This morning, I was out working when the office called me, there was a gentleman on hold who wanted his boat in the water before the weekend,” Northshore owner Tad Dowker said in a Facebook post that was later made private.

“Being Memorial weekend and the fact that we started working three weeks late means there is no chance this is going to happen,” the dock owner’s post continued. “Well our office personnel had explained this to the man and he replied, ‘I am the husband to the governor, will this make a difference?'”

Her spokesperson, Tiffany Brown, at first refused to confirm or deny the marina’s allegations and instead complained about the press coverage. Brown initially insisted the governor’s office would not respond to “every rumor that is spread online.”

Instead, Whitmer herself confirmed the conversation between Mallory and the dock company–at least partially validating partisan sniping and the original social media posts complaining that her husband had attempted to use his relationship with the Wolverine State’s chief executive to get his boat installed ahead of the crowd.

“He thought it might get a laugh,” Whitmer said. “It didn’t. And to be honest, I wasn’t laughing either when it was relayed to me. Because I knew how it would be perceived.”

Adding to the bad optics of requested political patronage and favoritism–jokingly or not–is the fact that Mallory’s request was made just a few days after Whitmer herself had discouraged residents from traveling to northern parts of the state due to expired pandemic travel restrictions.

“If you don’t live in these regions . . . think long and hard before you take a trip into them,” she said. “A small spike could put the hospital system in dire straits pretty quickly. That’s precisely why we’re asking everyone to continue doing their part. Don’t descend on Traverse City from all regions of the state.”

Critics and the media, however, seized upon the governor’s husband’s foibles during a Tuesday afternoon press conference. The implication here is easy enough to understand:  it simply looks like a classic case of hypocrisy on top of everything else.

“My husband did go up to our place in Antrim County and raked some leaves and came home,” an increasingly agitated Whitmer said in response to a reporter’s question about whether her family had been spending time up north.

“So, he was there,” she continued. “He did not–we did not all pile in the car to go enjoy our second home–although that would have been permitted if we had–but the fact of the matter is that he was there briefly. For a night, I think; one or two nights; and came right back home after he raked our leaves.”

Whitmer’s second home is roughly 25 minutes away from Traverse City.