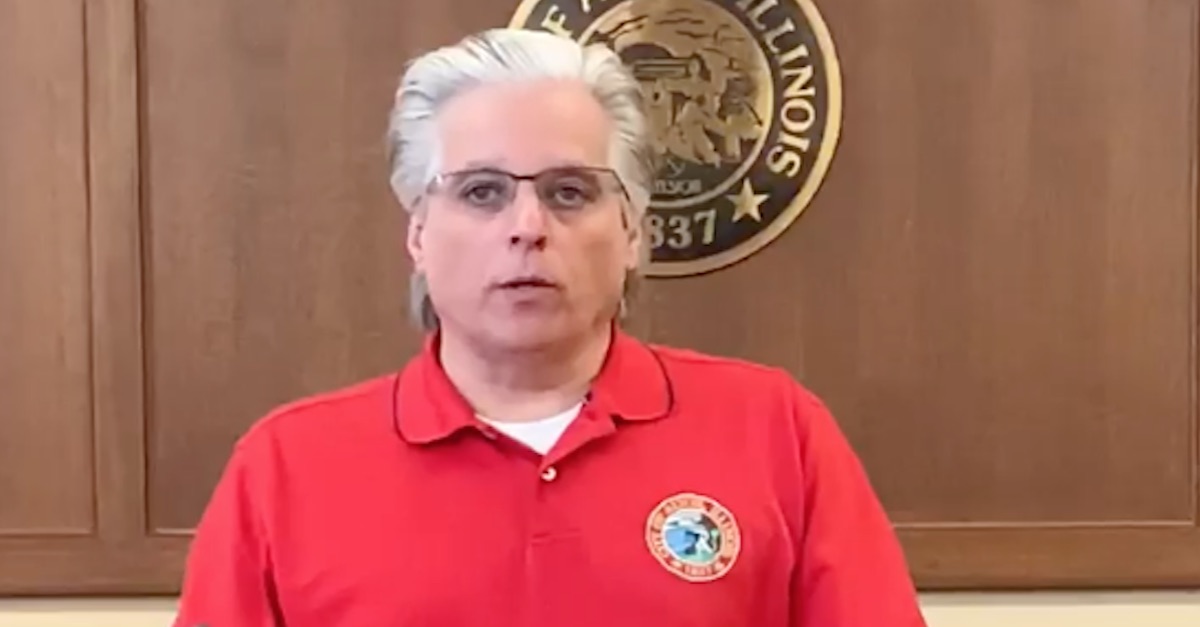 A mayor in Illinois issued a strict stay-at-home order and then sent the cops out to enforce it. His wife was one of the first to be charged.

Alton Mayor Brant Walker had hoped his residents might abide by their better angels, common sense and, at the very least, the epidemiological guidance issued by public health professionals at the Centers for Disease Control and Prevention (CDC).

All for naught. Alton’s police officers informed the mayor that his orders to practice social distancing and self-quarantine unless absolutely necessary simply weren’t being followed.

“Our police department has increased its presence in the community but unfortunately while patrolling, they have noticed that quite a few of our residents are not adhering to the stay-at-home order mandated by the Governor, which has now been extended to April 30th,” Walker said on Friday. “These are very serious times and I’m begging you to please stay at home and parents, please keep your kids at home, doing so is vital to our health.”

The mayor bolstered that plea by bringing down the threat of the truncheon and lash. He instructed his officers to aggressively use citations and arrests in order to enforce basic public health.

“I have directed the police department to use their discretion in issuing citations or making arrests to those refusing to follow the state issued stay at home mandate,” Walker warned. “We will do whatever it takes to decrease the spread of this deadly virus.”

Come Monday, the mayor announced some of the first casualties in his personal war against the novel Coronavirus (COVID-19) pandemic as well as the scofflaws of Alton. Walker announced that his wife was, unfortunately, caught in the cross-hairs.

The mayor also chided his wife’s transgression and punishment:

At approximately 1am on Sunday morning, I was informed by the Police Chief that the Alton Police Department was investigating and stopping a social gathering in downtown Alton that was occurring in violation of the provisions of the statewide “Stay At Home” order.

I was also made aware that my wife was in attendance at this prohibited social gathering. I instructed the Police Chief to treat her as he would any citizen violating the “Stay At Home” order and to ensure that she received no special treatment.

My wife is an adult capable of making her own decisions, and in this instance she exhibited a stunning lack of judgement. She now faces the same consequences for her ill-advised decision as the other individuals who chose to violate the “Stay At Home” order during this incident.

“I am embarrassed by this incident and apologize to the citizens of Alton for any embarrassment this incident may cause our City,” Walker added. “My first and most important priority is the safety and well-being of the citizens of Alton. We are in the midst of a national public health crisis, and I will continue to do everything in my power to ensure that your health is protected.”