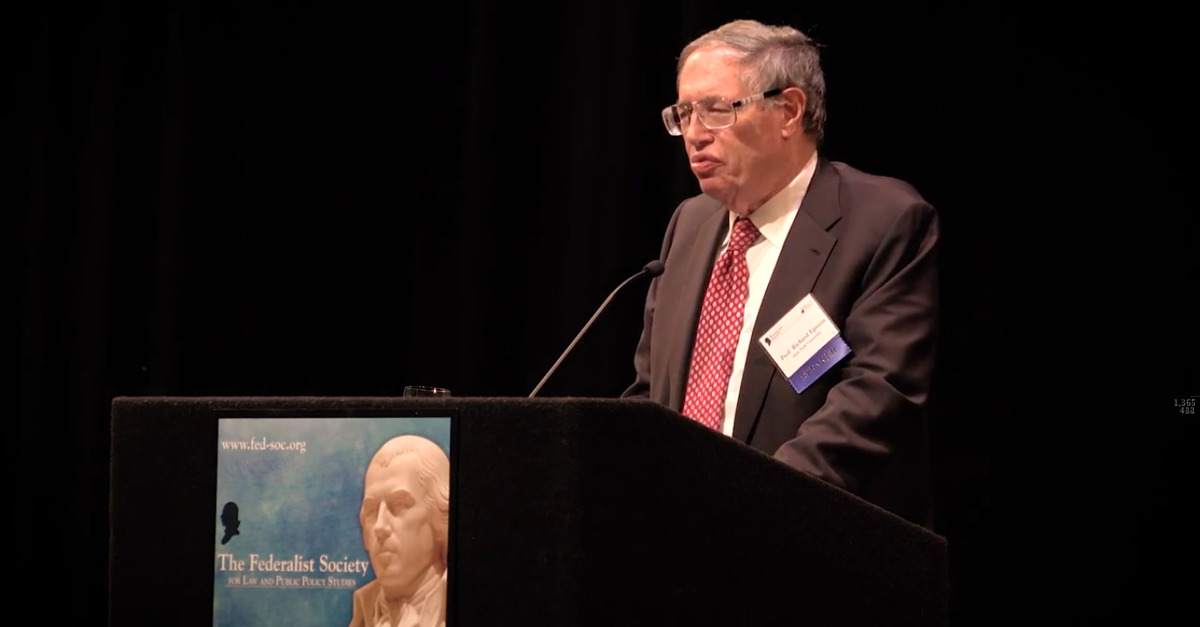 There are a lot of self-styled experts out there offering all manner of misinformation and unqualified assessments about the spread and severity of the novel Coronavirus (COVID-19). And then there are the law professors.

[I]t seems more probable than not that the total number of cases world-wide will peak out at well under 1 million, with the total number of deaths at under 50,000 (up about eightfold). In the United States, if the total death toll increases at about the same rate, the current 67 deaths should translate into about 500 deaths at the end.

Epstein’s overall thesis was that the Coronavirus pandemic is not actually a pandemic. That was also an incorrect assessment. But far from simply some crank pretending to have authority on a subject he clearly lacks, Epstein’s erroneous opinion on the subject was apparently taken quite seriously by the Trump administration–a real world outcome which could only lead to serious consequences, even death.

The off-base take was pilloried just about as soon as the data belied Epstein’s initial claim.

The doubly-distinguished University of Chicago law professor also said that deaths from the coronavirus–whatever their numbers–aren’t more tragic than other deaths.

“Of course, every life lost is a tragedy—and the potential loss of 50,000 lives world-wide would be appalling—but those deaths stemming from the coronavirus are not more tragic than others, so that the same social calculus applies here that should apply in other cases,” Epstein wrote in his Hoover Institution perspective piece.

So, what prompted the celebrated Laurence A. Tisch professor of law and director of NYU’s Classical Liberal Institute to make such a reality-deficient assessment? How did the elite academic and right-wing think tank expert make one of the most spectacularly wrong predictions anyone has yet to make about the spread of the virus and disease?

Law&Crime reached out to Epstein with a series of questions about his take and what qualifications he drew upon in order to offer advice typically associated with epidemiologists. The entirety of his response was as follows:

I have corrected it already.

And do you feel bad about thinking there will be 1 million dead?

(Editor’s note: the author did not speculate about the potential death toll during his correspondence with Prof. Epstein.)

Near that bottom of Epstein’s piece is the line, “Perhaps my analysis is all wrong, even deeply flawed. But the stakes are too high to continue on the current course without reexamining the data and the erroneous models that are predicting doom.”

The following “Correction & Addendum” was added on Tuesday:

That estimate is ten times greater than the 500 number I erroneously put in the initial draft of the essay, and it, too, could prove somewhat optimistic. But any possible error rate in this revised projection should be kept in perspective. The current U.S. death toll stands at 592 as of noon on March 24, 2020, out of about 47,000 cases. So my adjusted figure, however tweaked, remains both far lower, and I believe far more accurate, than the common claim that there could be a million dead in the U.S. from well over 150 million coronavirus cases before the epidemic runs its course.

The New York Times‘s Jim Tankersley noted that Epstein is a central figure in the burgeoning right-wing movement to “reopen the economy” and simply let the virus take its course among the population–a move the White House is considering against the unanimous advice of public health experts and professionals who are actually qualified to make such assessments.

Jeff Hauser is an attorney affiliated with the Center for Economic and Policy Research familiar with Epstein’s work.

“[Epstein] spoke at NYU Law when I was a student there (circa spring 2000),” Hauser said in a message to Law&Crime. “I challenged him about whether his preference for state rather than federal responsibility was due to ‘race to the bottom’/;collective action’ difficulties states faced regulating corporations. He acknowledged…yes. Which, of course, undercut all of his ostensibly neutral arguments in favor of decentralizing authority in a Constitution that was literally written by Founders seeking to EXPAND federal power over states, a trend accelerated during Reconstruction [and] since.”

Hauser then offered a scathing take on Epstein and his ideological project:

Libertarian versions of “law and economics” have either been disavowed (see, e.g., late era Richard Posner) or revealed to be nothing much more than elitism with a smiley face for Ayn Rand loving narcissists. Stop treating these people as serious!