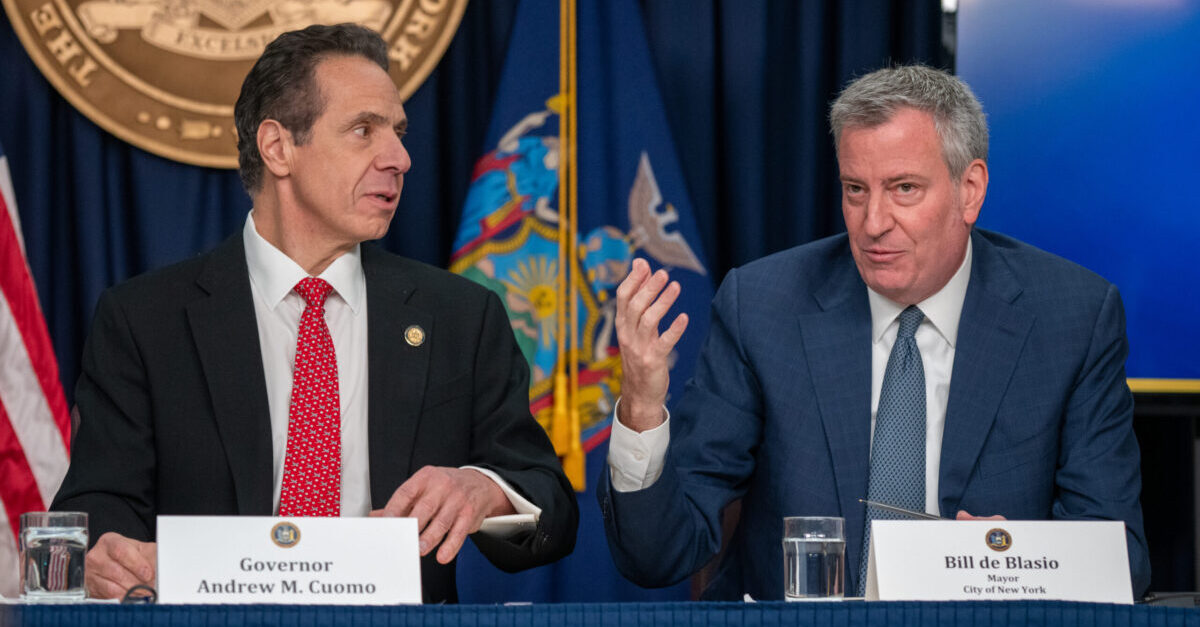 A federal judge has issued a preliminary injunction against New York Gov. Andrew Cuomo and New York City Mayor Bill de Blasio, both Democrats, because of limits their governments placed upon religious gatherings during the novel coronavirus pandemic. In issuing the order, the judge pitted words by Cuomo and de Blasio surrounding George Floyd protests against words by both politicians which strictly limited religious gatherings.

The order, by Senior District Judge Gary L. Sharpe, a George W. Bush appointee to the federal bench in the Northern District of New York, is not a carte blanche win for religious institutions to reopen. It merely pegs faith gatherings and functions to the same “Phase 2″ standards which apply to other industries (with required social distancing measures) and allows outdoor gatherings (again with similar social distancing measures). Yet the order also reads like a grievance against blatant hypocrisy. Included in the document are pages of blow-by-blow descriptions of Cuomo’s vacillating executive orders and guidance documents on whether religious institutions were or were not allowed to open.

One guidance document included “worship services” among the businesses which “must remain closed and are not eligible for designation as an essential,” the judge said.

A subsequent guidance said “houses of worship are not ordered closed” but “strongly recommended” that “congregate services” not be held (internal punctuation removed).

The judge’s opinion referenced yet another subsequent guidance which continued to list “worship services” among the things which — again — “must remain closed”:

Congregate services within houses of worship are prohibited. Houses of worship may only be used by individuals and only where appropriate social distancing of, at least, six feet between people can be maintained. Further, individuals should not gather in houses of worship, homes, or other locations for religious services until the end of this public health emergency. If possible, religious leaders should consider alternative forms of worship, replacing inperson gatherings with virtual services, such as phone or conference calls, videoconference calls, or online streaming.

So were protests over the Minneapolis police killing of George Floyd. Here’s how the judge summed up Cuomo’s views on that topic:

During a press conference held on June 1, 2020, when asked if he would “suggest people not go out and protest,” Governor Cuomo answered: “No, I think you can protest, but do it smartly and intelligently. . . . There were protests all across the country. Protest. Just be smart about it. With this virus, you can do many things now as long as you’re smart about it, right? You can reopen, you can go into a store and you can do a lot of things, just be smart.”

During another press conference three days later, Cuomo was asked why he was allowing restaurants to open for limited capacity, but not outdoor graduation ceremonies.  The judge zeroed in on these comments from the governor:

What difference does it make? . . . The issue is a public health issue and you don’t want people sick and dead. . . . It’s about death, it’s about balancing the risk versus the reward, balancing the desires and wants versus the consequences.

In the same press conference, Cuomo said: “I want to thank the protestors. . . . I stand with the protestors on the point that we need meaningful reform.”

The judge similarly chided Mayor de Blasio for attending a George Floyd gathering “without a mask” which did not following the same distancing measures he placed upon religious gatherings.

The plaintiffs included an eclectic mix of Catholic and Jewish leaders who were unable to fulfil the commandments of their faiths due to the restrictions placed upon them by the government, the lawsuit alleged.

Having carefully reviewed the relevant issues, and with a firm understanding that the executive branch response to the pandemic has presented issues with a degree of complexity that is unrivaled in recent history, it is plain to this court that the broad limits of that executive latitude have been exceeded. That is not to say that Governor Cuomo or Mayor de Blasio have utterly failed in their reaction to COVID-19. To the contrary, the State of New York, at the moment anyway, is among the best situated states in terms of infection and mortality rates. While there is more clarity every day with respect to the best practices for slowing the spread of COVID-19, there is wide and reasonable disagreement about exactly how to implement rules and regulations to achieve those ends, and, as is particularly present in this case, even more so with respect to reopening in a way that promotes safety, economic viability, and the enjoyment of all the rights that the people of this country and the State of New York are guaranteed. As the Chief Justice recognized in Newsom, it is not the judiciary’s role to second guess the likes of Governor Cuomo or Mayor de Blasio when it comes to decisions they make in such troubling times, that is, until those decisions result in the curtailment of fundamental rights without compelling justification.