Couples Sue Democratic ‘King’ of Pennsylvania: So Much for ‘My Body, My Choice’ … Your Mask Mandate Is ‘Tyranny’ 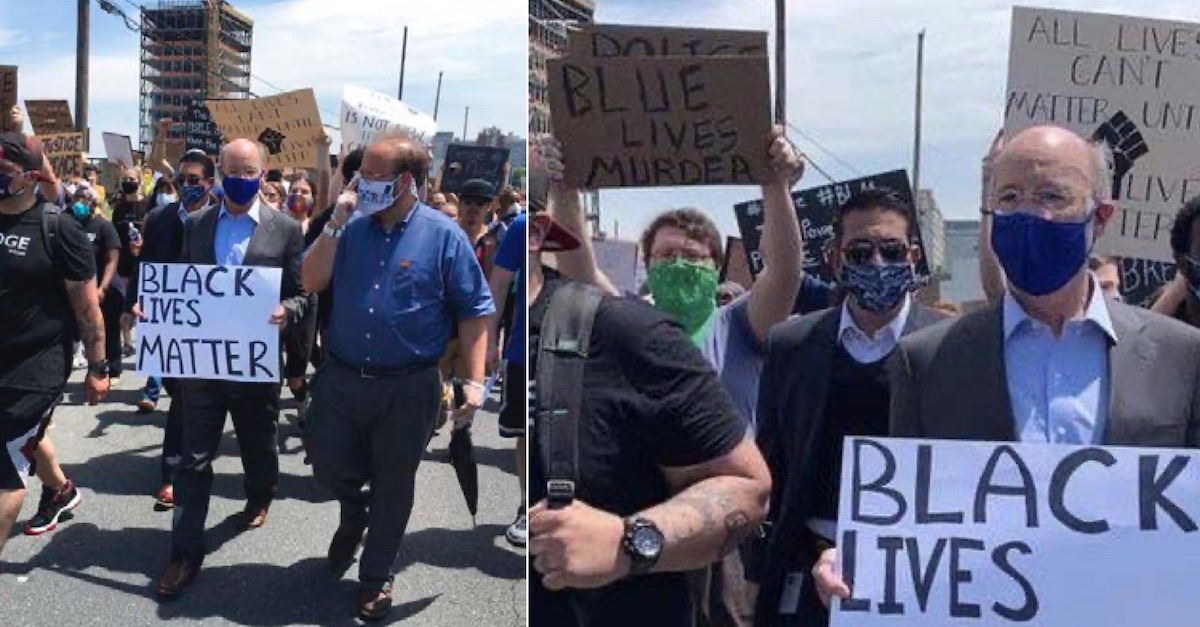 Two couples from Pennsylvania are suing Gov. Tom Wolf (D) over mask-wearing mandates, claiming that Wolf is acting like a “king” and a tyrant. The lawsuit, filed on Thursday in the U.S. District Court for the Middle District of Pennsylvania, began with an appeal to the dire warnings of the American founding.

The plaintiffs, named as Chad Parker, Rebecca Kenwick-Parker, Mark Redman and Donna Redman, claimed that to allow Wolf’s mandate to stand is to permit “draconian encroachments on their freedoms,” which Benjamin Franklin and John Adams warned against:

Engraved by the steps of the Pennsylvania State Capitol in Harrisburg is a quote from Benjamin Franklin stating, “Those who would give up essential liberty, to purchase a little temporary safety, deserve neither liberty nor safety.” This, unfortunately, is the current situation in Pennsylvania.

John Adams warned: “But a Constitution of Government once changed from Freedom, can never be restored. Liberty once lost is lost forever.” Plaintiffs bring this action because they reasonably fear that the draconian encroachments on their freedoms set forth in this Complaint will become the “new norm.” It has been said that all tyranny needs to gain a foothold is for people of good conscience to remain silent.

The plaintiffs claimed Wolf has violated their First Amendment, Fourth Amendment and Fourteenth Amendment rights. They argued that compelling the wearing of masks is an unlawful example of the government compelling speech. The argument went that, because the coronavirus pandemic has been “politicized,” mask-wearing has become a “form of expression.”

“The freedom of speech is not confined to verbal expression, but includes conduct that is sufficiently imbued with elements of communication. That is because the Constitution looks beyond written or spoken words as mediums of expression and recognizes that symbolism is an effective way of communicating ideas,” the lawsuit said. “Conduct, such as the wearing of a face mask during this politicized pandemic, is sufficiently communicative because it conveys a particularized message and the likelihood is great that the message will be understood by those who view it.”

“Wearing a face mask during this current and highly politicized pandemic has become a form of expression. The face mask is, for many, including Plaintiffs, a symbol of oppression and government tyranny. It is a sign that the wearer is willing to surrender his or her freedoms to the government,” the plaintiffs went on. “Plaintiffs oppose this message and thus they oppose the requirement to wear a face mask because it conveys this message.”

The plaintiffs also claimed that science is on their side, citing a “recent CDC report” saying that “just six percent of coronavirus deaths have ‘COVID-19’ as the only cause mentioned, revealing that 94 percent of patients who died from coronavirus also had other ‘health conditions and contributing causes.’”

Dr. Anthony Fauci responded to that CDC report (which is currently being cited as proof that the novel coronavirus isn’t as deadly as the 180,000-plus death toll indicates).

“The point that the CDC was trying to make was that a certain percentage [of people who died] had nothing else but just COVID,” Fauci said. “That does not mean that someone who has hypertension or diabetes who dies of COVID didn’t die of COVID-19. They did.”

“So the numbers you’ve been hearing, the 180,000-plus deaths, are real deaths from COVID-19,” he added. “Let there not be any confusion about that.”

Plaintiffs further claimed that mask mandates violated Fourteenth Amendment guarantees to privacy and “bodily integrity.” They said Wolf’s orders run counter to the “My body, my choice” mantra of the left.

“Plaintiffs also object to the mask mandate because it violates their privacy interests, including their right to bodily integrity and personal autonomy free from government interference. In this regard, Plaintiffs agree with the oft-quoted mantra, ‘My body, my choice,'” the complaint said.

The lawsuit also included images in an attempt to support the plaintiffs’ arguments. One of them was a political cartoon, the other was an image of Wolf participating in a Black Lives Matter protest.

The cartoon, the complaint said, is visual proof of masks as “symbol of oppression.” 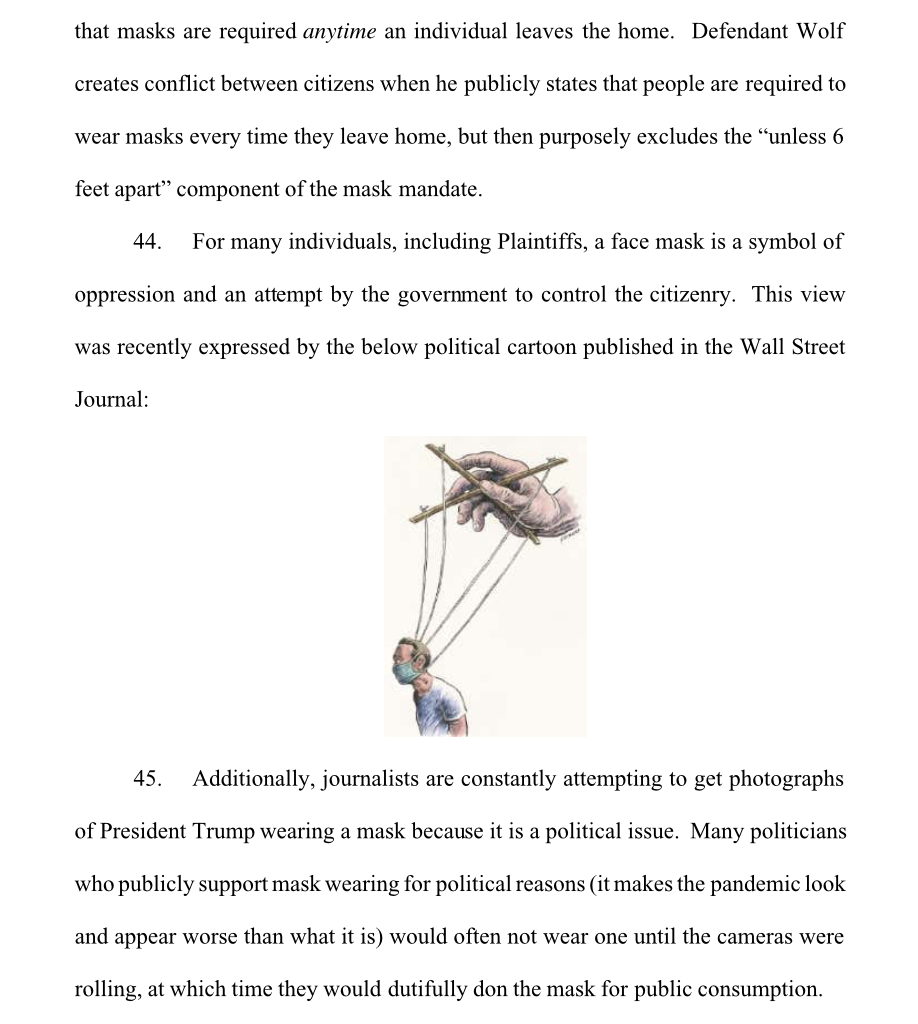 “For many, including Plaintiffs, forcing them to wear a face mask is forcing them to convey a message with which they disagree. Wearing a mask conveys the message that the wearer has surrendered his or her freedom to the government, particularly in light of the facts of this current declared pandemic,” the suit said.

The image of Wolf approvingly marching at a Black Lives Matter protest was juxtaposed with his reaction to those who protested his stay at home orders. 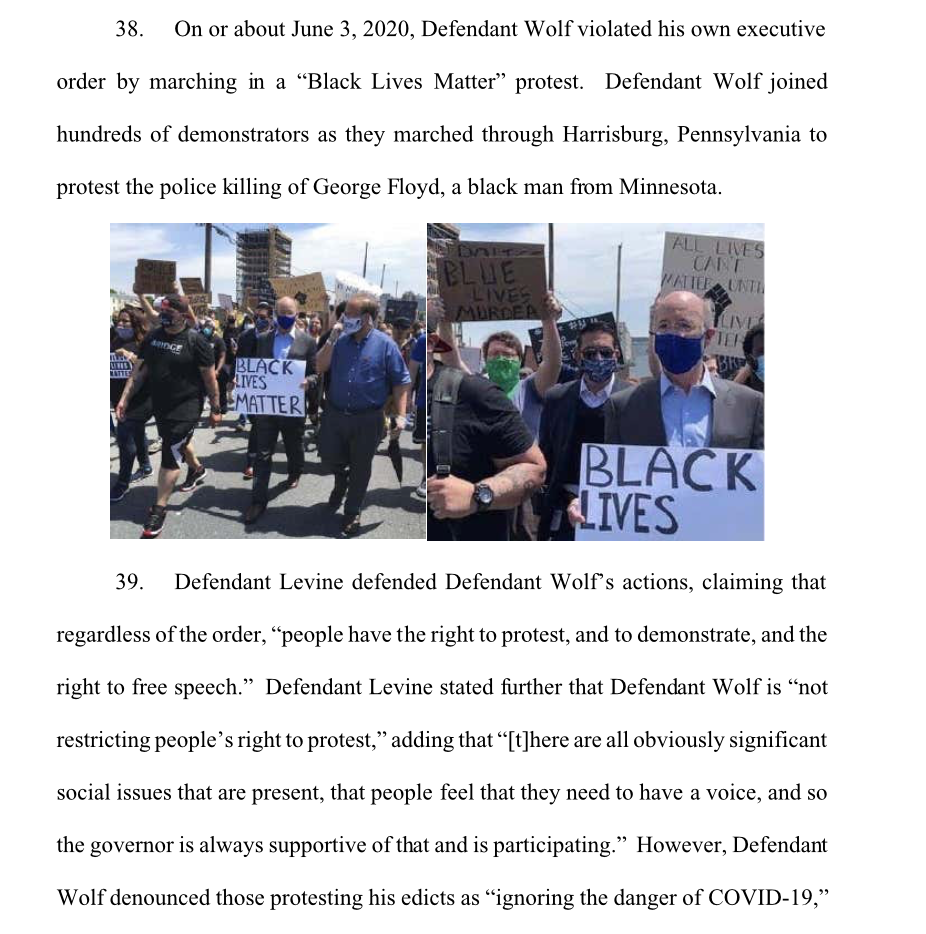 “The order to make mask-wearing mandatory when leaving home was put in place to protect all Pennsylvanians from the spread of COVID-19,” Gov. Wolf said in July. “This simple practice, combined with social distancing, handwashing, and staying home if sick, is paramount to stopping this virus from infecting more people. I again urge Pennsylvanians to mask up for the protection of everyone.”

[Image of Wolf marching with Black Lives Matter protesters; the image was included in the lawsuit]