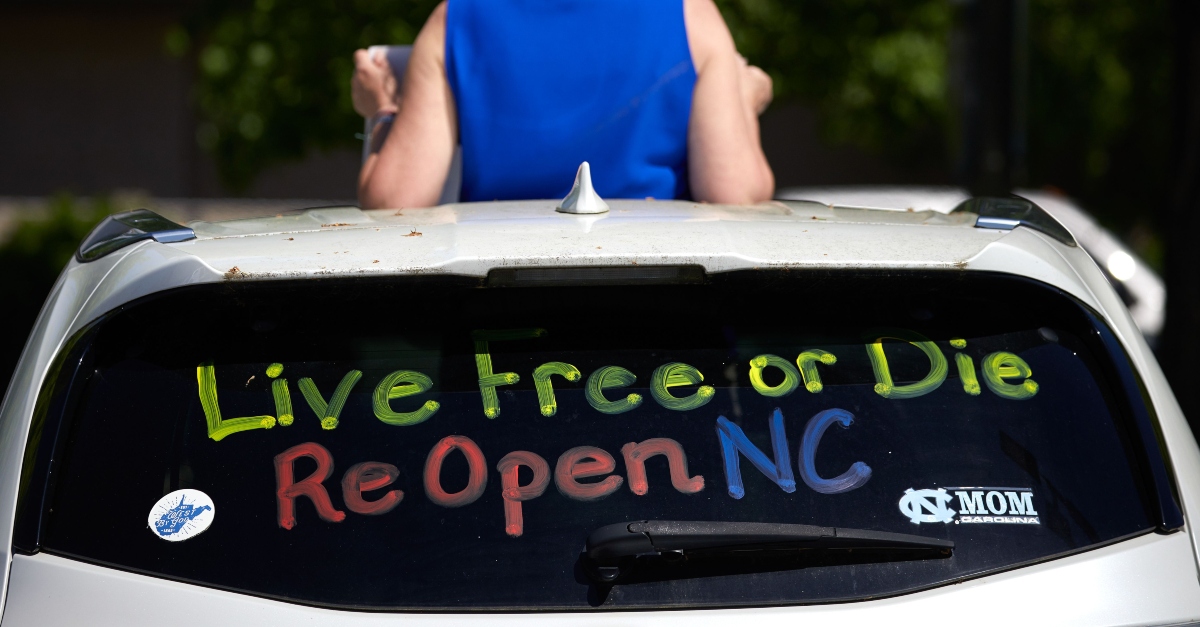 On April 13, the mayor of Greenville, Mississippi, rescinded $500 citations issued to congregants of a local church for violating a “shelter-in-place” order, after a religious freedom suit was filed against the city. The suit was among a handful of court actions related to states’ authority to limit the rights of U.S. residents to engage in activities such as attend church, travel across state lines and enforce eviction provisions during the COVID-19 pandemic.

The global pandemic has spawned numerous legal challenges in the U.S, including several court filings with more expected. In recent days, legal actions have included:

At issue is what happens when state powers under the 10th Amendment clash with constitutional rights to practice religion, travel across state lines or enforce contracts. In 2016, a federal judge in New Jersey detailed relevant case law in upholding the quarantine of a nurse who cared for individuals affected by the 2014-16 Ebola epidemic in Sierra Leone. She sued after she was stopped at Newark Liberty International Airport under a state order and detained against her will for approximately 80 hours.

But with the unique and unprecedented circumstances raised by this pandemic, application of the law and earlier Supreme Court rulings do not always result in clear cut answers. Take the church case in Greenville, Mississippi, for example.

In 1905, in Jacobson v. Massachusetts the U.S. Supreme Court upheld a state law mandating smallpox vaccination of adults and subjecting those who refused to a fine and potential imprisonment. A minister who objected on personal liberty grounds under the 14th Amendment filed suit after he was prosecuted and fined. In his 7-2 majority opinion, Justice John Marshall Harlan said “the liberty secured by the Constitution of the United States to every person within its jurisdiction does not import an absolute right in each person to be, at all times and in all circumstances, wholly freed from restraint.”

But the federal suit filed in Mississippi by Temple Baptist Church raised a new wrinkle because the church service was offered on a drive-thru basis and didn’t require congregants to leave their cars. In a filing supporting the church, the U.S. Department of Justice suggested the church faced “distinctive treatment” because other establishments, such as restaurants, were allowed to offer drive-thru carryout. The next day, the city reversed its policy and announced that similarly conducted religious services could be held.

The Supreme Court’s decision in Jacobson noted governments must act reasonably, and not “in such an arbitrary and oppressive manner as to justify the interference of the courts to prevent wrong and oppression.” The cases in Kentucky are continuing as is the case in New Mexico.

Another potential constitutional issue is raised by state-by-state interference with contracts, such as tenant-landlord evictions, which would raise the question of the “Contracts Clause” of the Constitution under Article I, Section 10. The clause limits, among other areas, state action in “impairing the obligation of contracts.” Even so, the U.S. Supreme Court said in a 1983 Kansas case involving the contract price of natural gas that the “Contract Clause’s prohibition … must be accommodated to the state’s inherent police power to safeguard the vital interests of its people … (and) if a substantial impairment is found, the state, in justification, must have a significant and legitimate public purpose behind the regulation.”

Case law precedent is less clear on the legality of freedom-of-movement restrictions. U.S. Supreme Court Justice Potter Stewart wrote for the majority in a 1966 decision that “the constitutional right to travel from one state to another … occupies a position fundamental to the concept of our federal union. It is a right that has been firmly established and repeatedly recognized.” The decision said private citizens in Georgia could be indicted under the 14th Amendment for hindering the movement of blacks across state lines among other deprivations of individual rights.

But how does that constitutional right stand up in the context of a global pandemic? Is that a good reason for a governor or local official of one state to bar or quarantine individuals solely based on license plates, as some officials have? Or require travelers to another state to quarantine for 14 days when they return home? In judging a governor’s or local official’s authority to exercise such powers under the 10th Amendment, Supreme Court decisions require a “compelling governmental interest” be shown and evidence that the action has been narrowly tailored to achieve that interest.

While state governors and local officials have wide latitude to enforce their directives during an emergency, such as the COVID-19 pandemic, the exercise of their authority cannot be overbroad. Judicial review, guided by the Constitution and Supreme Court precedents, will have the last word.