‘There Is No Time Limit’: Lawsuit Aims to Force Ratification of Women’s Equality Amendment 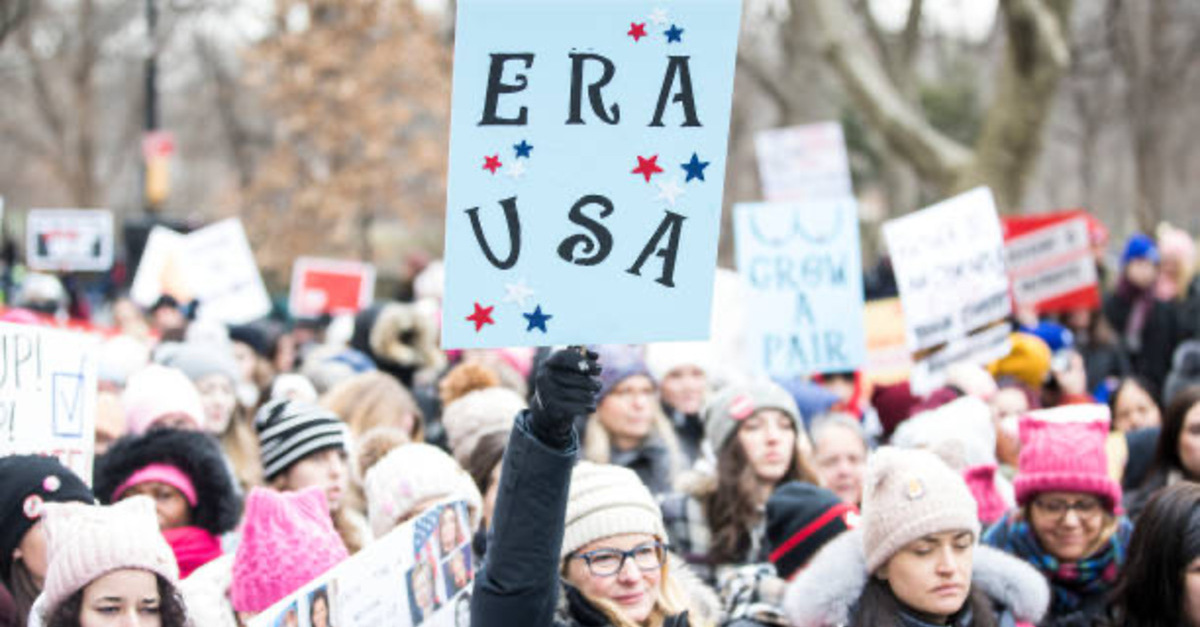 Three U.S. jurisdictions are suing the nation’s federal archivist in a long shot bid to force the Trump administration into ratifying a long dormant Constitutional Amendment that would legally advance women’s rights.

The Commonwealth of Virginia along with the States of Illinois and Nevada filed a petition against David S. Ferriero on Thursday—arguing that his failure to record the passage of the Equal Rights Amendment (ERA) is a direct violation and abdication of his duties under the U.S. Constitution.

Ferriero is a librarian by trade who was appointed to his current position by former president Barack Obama. As the person who changes the Constitution, Ferriero recently opted to follow the orders given by the current Department of Justice (DOJ) which believes the ERA has long since passed it’s sell-by date.

As Law&Crime previously reported, the DOJ’s argument is based around timelines placed on the ERA’s passage and constitutional viability by Congress several decades ago.

“Congress has constitutional authority to impose a deadline for ratifying a proposed constitutional amendment,” an opinion from DOJ’s Office of Legal Counsel recently noted. “It exercised this authority when proposing the Equal Rights Amendment and, because three-fourths of the state legislatures did not ratify before the deadline that Congress imposed, the Equal Rights Amendment has failed of adoption and is no longer pending before the States.”

Originally opened for ratification in 1972, the ERA failed to secure the necessary endorsement of three-quarters of state legislatures by 1979 after right-wing and Christian political organizations mounted an all-out assault on the major legislative prize of the women’s liberation movement.

The original deadline was then extended an additional three years, but still the country balked at codifying longstanding feminist ideals into the nation’s explicitly male-focused and patriarchal founding charter.

Virginia, Illinois and Nevada were the latest states to pass the amendment—many decades later—in 2017, 2018, and early 2020 reverse respectively.

The lawsuit’s lofty rhetoric hopes to match the gravity of its purpose: equality. A word and legal incantation more forceful than a wedding vow.

“The United States Constitution now declares, once and for all, that equality of rights under the law shall not be denied or abridged on account of sex,” the three states begin. “For nearly 150 years, our Nation’s foundational document did not acknowledge the existence of women. In 1920, the concept of equality among the sexes appeared in the Constitution for the first time, but was limited to the right to vote. Now—after 231 years and on the centennial of the 19th Amendment—the American people have committed to equality regardless of sex by adopting the Equal Rights Amendment as the 28th Amendment to the U.S. Constitution.”

“A lawsuit has already been filed U.S. District Court in Boston, arguing that the congressional deadline for ratification was not binding because it failed to specifically include the text of the ERA,” she noted. “Simultaneously, the states of Alabama, Louisiana and South Dakota have filed a federal lawsuit looking to block the Amendment.”

Legal minds are split on the multiple lawsuits’ fates—and therefore the fate of the ERA itself.

“Prediction: This suit will be dismissed on standing grounds, [because] the states aren’t injured (and probably no one else is, either) by the Archivist’s failure to certify,” tweeted Georgetown University Law Professor Marty Lederman.

But, as Nanos noted, the ERA may not be entirely shelved quite yet:

At this point, it isn’t clear how the relevant courts may rule. ERA supporters have pointed out that the 27th Amendment, first written in 1789, was not adopted until more than 200 years later. So, there’s at least some precedent for a protracted amendment process.

The three states explicitly reference that 200-plus-year-long hiatus and also rubbish the idea that any such timeline is even constitutional to begin with.

“Under Article V [of the Constitution], there is no time limit for how long Congress may deliberate before proposing an amendment to the States,” the lawsuit notes. “The same is true of a State’s decision about whether or when to ratify a proposed amendment.”

“This is going to be a fascinating suit to watch—both on the merits and for what is sure to be a fight over whether those merits are ultimately up to the courts, or whether the Constitution commits any dispute over the validity of amendment ratification to the political branches,” he tweeted.